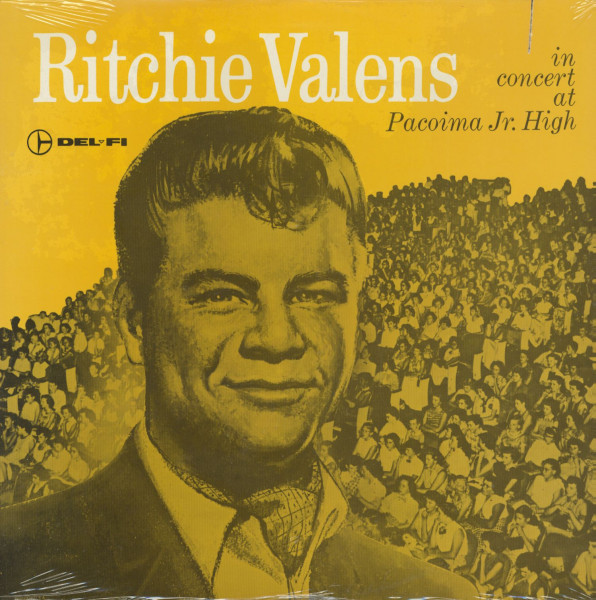 (Rhino) 10 tracks - Reproduction of the original 1960 'DelFi' album! Cut-out LP!
Ritchie Valens in concert at Pacoima Jr. High
We at Del-Fi have released the following recorded Assembly because somehow the word got out that it had been recorded, and the requests from Ritchie's Fan Clubs are so numerous that we finally decided to include the Assembly as part of this new album. We realize that the recorded sound is not as clear as we would like it, but when recording .on-the-spot" this sometimes happens. At any rate this album is a rare opportunity to hear the great Ritchie Valens in person, and to hear him as he was in everyday life. As you listen, you will realize what is great entertainer he was, as well as having such a wonderfully natural sense of humor. Also his great humbleness is felt from the first works he speaks. Gail Smith, the President of the Los Angeles Ritchie Valens Memorial Fan Club, is the Mistress of Ceremonies and she was is very close friend of Ritchie's. They were classmates at Pacoima Jr. High School. We owe her many thanks for conducting the Assembly in such a fine fashion. Ironically, Ritchie sings one of the songs that made Eddie Cochran famous, 'Summertime Blues' Ritchie was very close to him, forming their friendship when they appeared together at the Loew's State Theatre in New York. Little did Ritchie know that Eddie Cochran was to die in a crash also. Another tune, 'From Beyond' although an instrumental, expresses Ritchie's inherent sadness felt in so many of his songs: such as 'Donna','Bluebeirds Over The Mountain', 'Now You're Gone' and others found in his first album 'Ritchie Valens' and his second album 'Ritchie'.

By contrast his great feeling for humor is expressed in 'Summertime Blues' and 'Come On Let's Go' (which may sound slightly different from his record; but he never sang a song the same way twice). Also by contrast his endless vitality comes through when he sings the great hit 'La Bamba': So here we go...as we listen to the only 'on the spot' recording of the one and only 'Ritchie Valens in concert at Pacoima Jr. High'

Side two of this album has been devoted to presenting some of the recordings that 'may have been' had Ritchie lived. These are fragments of ideas not yet polished or completed ... ideas that Ritchie recorded at my home from time to time as we worked preparing new material. Many of these tunes have no names so I will describe them prior to each track. The first track you will hear is an idea for is rhythm song and, as far as I know, no lyrics have been written to it yet.

'This next track, No.2 shows the influence of thereat talent, Bo Diddley, who appeared with Ritchie on the same bill with Eddie Cochran for twelve days during the Allen Freed Christmas Show in New York. Ritchie had just returned from this engagement when he recorded the track you are about to hear. Track 3...One of Ritchie's greatest records was a Mexican folk song titled 'La Bamba' which he adapted. This next track was to be the follow-up to 'La Bamba' ... its title: 'Malaguena!' This song also is a great Mexican standard and, as you can hear, would have been another million seller we are sure. Although Ritchie had not put his voice to the song as yet, if you try, you can picture him singing it...with all the fire that was in his guitar playing, laying a foundation for his great voice. The next track, 4, is the beginning of a song about a boy who loved to dance. In case you cannot understand all the lyrics, we have put them down here for you to read: '

Well now, little girl, I'm getting so tired just waiting for you darling. I want to get to the dance tonight; I want to dance all the way. Well now, everytime I come here You're fixing your hair. Come on, little baby, Let's do the hop and rock it up tonight, dear; 'Cause I want to just dance, dance, dance. Well now, just rock along baby; You know, rock along baby. Let us rock little darlin: gonna rock it up tonight.'

The final track is a tune Ritchie called 'let's Rock And Roll'. Only part of the song was completed, but it had all the indications of being another 'Come On Let's Go': So here is the final song in the album: A perfect cross-section of the great Ritchie Valens, singing the songs he would have made famous had he lived.
Bob Keene, President Del-Fi Records, Inc.