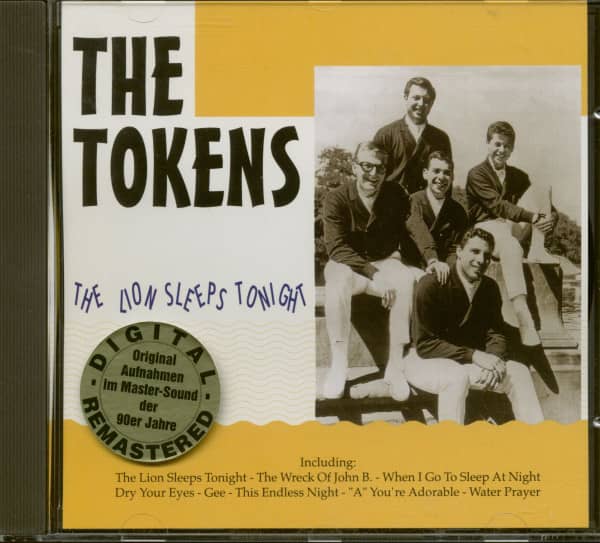 This article is deleted and can no longer be ordered!
Please inform me as soon as the product is available again.
P Secure bonuspoints now
Description
Learn more about The Tokens
Review 0
Description
​(1995/Back Biter) 18 tracks more
Close menu

The Tokens: The Lion Sleeps Tonight

Learn more about The Tokens
The Tokens Tonight I Fell In Love When they started out in the mid-'50s, The Tokens... more
Close menu
"The Tokens"

Tonight I Fell In Love

When they started out in the mid-'50s, The Tokens (not to be confused with the group who made Doom Lang) were ahead of their time as five Jewish teens attending Abraham Lincoln High School in Brooklyn that liked rock and roll and wanted to make their own. Piano prodigy Neil Sedaka and falsetto specialist Jay Siegel recruited lead tenor Eddie Rapkin, Cynthia Zolotin, and Hank Medress (born November 19, 1938) from choral class to form The Linc-Tones. They squeezed rehearsals around Neil's piano practice (he surprisingly usually sang bass).

Zolotin's mother knew song plugger Happy Goday and set them up with an audition. That led to an audience with Morty Craft, owner of Melba Records with Ray Maxwell. Goday may also have renamed them The Tokens. Craft produced their Melba debut session in the spring of 1956, their single pairing the Rapkin-led rocker I Love My Baby and a Sedaka-fronted While I Dream, both penned by Neil and Howie Greenfield. Not too long after that, Neil left The Tokens. He signed with RCA Victor as a solo in 1958 and prepared to embrace mainstream stardom.

Medress and Siegel rebounded by joining Warren Schwartz and Fred Kalkstein in a new group, Darrell & The Oxfords, making two singles for Roulette (their Siegel-led Picture In My Wallet was a big New York favorite). Hank and Jay next hooked up with baritone Phil (born April 1, 1942) and first tenor Mitch Margo (born May 25, 1947, he was all of 13). Medress met a lady on the subway whose son was a music publisher. The guy put up $300 to pay for a session at Allegro Studios in the fall of 1960 where the new group waxed Medress and the Margos' snappy Tonight I Fell In Love (I'll Always Love You would be its B-side). Craft now ran Warwick Records and he dug the demo enough to issue it in February of '61. He didn't like their name, Those Guys, so The Tokens were back in business.

Tonight I Fell In Love cracked the pop hit parade for The Tokens in March, sailing to #15. Warwick couldn't hold them for long. Citing non-payment of royalties, they defected to RCA, where their reinvigoration of The Weavers' Wimoweh, retitled The Lion Sleeps Tonight, paced the pop charts and went gold late in the year. The group continued to record throughout the decade, delving into production (they helmed The Chiffons' '63 chart-topper He's So Fine) and later forming their own label, B.T. Puppy. Medress died of lung cancer June 18, 2007. Siegel and the Margos now front competing Tokens groups.