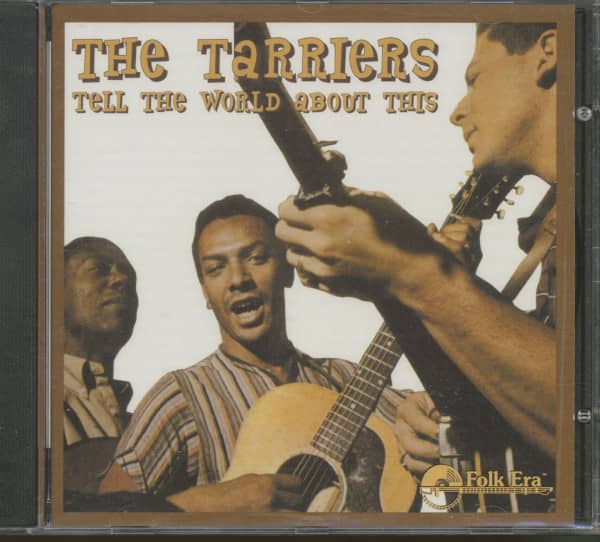 The Tarriers: Tell The World About This (CD)

Article properties: The Tarriers: Tell The World About This (CD)

Learn more about The Tarriers
The Tarriers VINCE MARTIN & THE TARRIERS 25. The Banana Boat Song  26.... more
Close menu
"The Tarriers"

Like its West Coast counterparts The Easy Riders, The Tarriers achieved nationwide success during a transitional period in American entertainment. They had everything going for them: talent, charisma and ambition. The only problem was that they were ahead of their time. Mainstream American nightclub audiences simply didn't know what to make of three young folksingers accompanying themselves on guitars and a five-string banjo. The Kingston Trio and the emerging college concert circuit would change all that, but that would be another two years in the future.

The catalyst behind The Tarriers was Erik Darling, born September 25, 1933 in Baltimore, Maryland. Moving to New York City in 1950, the youth became involved with the folk musicians who gathered each Sunday in lower Manhattan's Washington Square. In early 1953 he met Bob Carey, an 18-year-old Brooklyn College student who closely patterned his style, repertoire and persona on that of his idol, Josh White. Carey briefly attracted national attention that year after winning a top prize on Arthur Godfrey's Talent Scouts, singing Apples, Peaches And Cherries, which White popularized in 1947. Before he could capitalize on this success, Carey was drafted.

Just before Carey entered the army, he and Darling made their first recordings together. Stinson Records was repackaging old Asch folk and jazz 78s onto 10" LPs, and the owners approached banjo player Roger Sprung about cutting new sides to flesh out an anthology of Woody Guthrie and Lead Belly masters. Sprung recruited both Carey and Darling. The ad hoc trio worked out four songs, including the Washington Square favorite Tom Dooley. In 1955 Darling began auditioning Washington Square regulars for a new group, The Tunetellers, hoping to emulate the Weavers. Darling, Carl Carlton, Al Wood and Ray Yavneh were the initial members. When Carey returned from army service in Germany, Darling convinced him to join them.

The Tunetellers auditioned for Al 'Jazzbo' Collins, who felt the group had commercial potential. The legendary jazz disk jockey offered to approach some entertainment brokers he knew. Encouraged by Collins' response, the group booked the Circle in the Square Theatre for an evening concert showcasing the act. The evening proved disastrous, Darling recalled. Neither Collins nor any of his promised contacts showed up, and whatever momentum The Tunetellers created quickly dissipated. Yavneh left, and Wood quit coming to rehearsals.

Undaunted by this setback, The Tunetellers regrouped under a new name, The Tarriers, after the old vaudeville work song Drill, Ye Tarriers, Drill. Carlton thought the group would benefit from adding another member and suggested Alan Arkin, a friend of his living on the West Coast. Arkin, who earlier made a 10" solo album for Elektra Records, had a breezy, flowing style that perfectly complemented Carey and Darling. Carlton became the odd man out. To avoid any hurt feelings, the quartet broke up. Arkin, Carey and Darling then regrouped as a trio.

Extended summer bookings in New York's Catskill Mountains enabled the band to polish and pace its performances. When the Tarriers returned to New York City, longtime folk music enthusiast Art D'Lugoff was impressed with the trio's professional sheen. He brought them to Philip Rose, a music publisher who also operated a small independent label, Glory Records. Sharing D'Lugoff's enthusiasm, Rose signed them to a one-year contract.

About the same time, he planned to record Vincent Marcellino, a 20-year-old Brooklyn native who sang country songs in area taverns under the name Vince Martin. Rose handed Martin the lead sheets for Cindy, Oh Cindy, a song penned by Robert Nemeroff and Burt D'Lugoff', Art's brother. Rose told him to return to his office in a few days. He then asked The Tarriers to provide a suitable accompaniment. Unenthusiastic about this prospect yet eager to record, the trio reluctantly agreed. While rehearsing the song, Darling recognized its melody as Pay Me My Money Down, a Jamaican rouser in the Weavers' repertoire. The trio instinctively recast Nemeroff and D'Lugoff's lyrics over the tune's original Jamaican rhythm. Cindy, Oh Cindy became an enormous hit, peaking at No.9 on Billboard's pop chart and spawning a successful RCA Victor cover by Eddie Fisher. By contrast, The Tarriers' first Glory single, an inane novelty titled The Wishing Well Song, did nothing.

After a few engagements with Martin supporting the hit, Arkin, Carey and Darling told Art D'Lugoff they wanted to build their own reputation – not serve as another artist's backup band. Rose agreed and booked a Manhattan studio in late fall 1956. The session standout was The Banana Boat Song, a fusion of two Jamaican folk songs that Darling heard Bob Gibson perform in Washington Square. Released in November 1956, it became Glory Records' second national hit, rising to No.4 on the 'Billboard' pop chart. Again, RCA Victor quickly capitalized on that success, belatedly releasing a single of Day-O from Harry Belafonte's best-selling 'Calypso' album. Louise Bennett had recorded Day-O in its traditional form for Folkways Records in 1954, a little after Edric Connor recorded it on the ‘Songs from Jamaica’ LP (where it was titled Day-Dah-Light). Both probably adapted it from Tom Murray’s book, ‘Folk Songs of Jamaica,’ published in England in 1951. What’s not in doubt is that the song became the catalyst for the short-lived calypso craze.

In early 1957 The Tarriers recorded additional material for an LP. 'Those Brown Eyes' came from a recording by Woody Guthrie and Cisco Houston. Darling, Arkin and Carey gave Guthrie a quarter of the song royalties, even though the ailing artist never claimed any authorship.