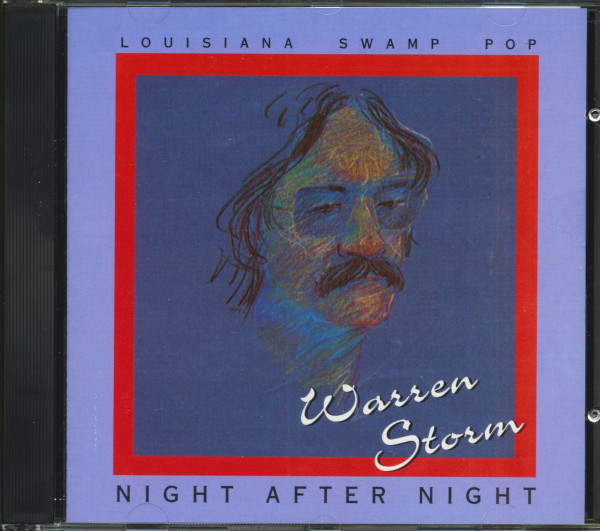 The most amazing thing about Lafayette, Louisiana, the capital of Cajun country and most popular pit stop on Interstate 10 between Houston and New Orleans, is the entertainment. It offers both quantity and quality and never shuts down. One dancehall and drinkery, Four Seasons, is home base for Swamp Pop Legend, WARREN STORM. Unless at an out-of-town gig, Warren can be heard six nights a week, enthralling the loyal throngs with Cajun, Blues, Zydeco, and Swamp Pop favorites until 2 AM.

WARREN STORM, drummer elite and soulful singer, was born Warren Schexnider Feb. 18, 1937 near Abbeville, La., the county seat of Vermilion Parish. Taking up where his father left off, he began supplying the backbeat pro-fessionally at age fifteen to Larry Brasso's Rhythmaires, a C&W outfit of great renown in the area,-a group with whom be played three years. He thereafter took up with Herb Landry for a similar period learning all the new R&B licks. In the meantime, he was also freelanc-ing with Bobby Charles, playing both local dates and in New Orleans, where he met and was highly influenced by Cosimo's studio drummer, Charles "Hungry" Williams.

By the late fifties, he had formed his own combo, the We-Wows which evolved into the Jive Masters, bands in great demand in the region. In 1958 Crowley record producer, Jay Miller, was the first to record Warren and gave him the name WARREN STORM. His R&B twist to Guy Massey's standard, "PRISONER'S SONG", was a huge hit and climbed to #80 on the Billboard charts. Several more releases followed by Warren could not repeat the triumph of his initial effort, but Warren was kept busy both day and night as a studio drummer at Miller's studio, backing virtually all the artists recorded by Miller.

After Warren's contract with Miller ran out in the early sixties, he decided to try his luck with Houston based producer, Huey Meaux. A few regional hits ensued when juke boxes still carried enormous clout with the buying public, but that national hit never emerged and it had Warren wondering if it were in the stars to continue this profession; but persistence, his strong suit, always won out. Most likely, the early and middle sixties were the most satisfying of his career in that he was to experience growth as a musician, experimenting with all styles of music, playing with various combinations of personnel. As a trio of Swamp Pop legends, he, with Rod Bernard on guitar, and Skip Stewart on bass, carved a niche for themselves in rock and roll history as the Shondells. As a staff musician for Carol Rachou's studio, he appeared on early Eddy Raven recordings and those of Bobby Charles, as well as on Dale & Grace's blockbuster #1 hit in 1963, "I'm Leaving It All Up To You".

Still on hire as a studio musician, Warren added the punch to the now classic Swamp Pop/Zydeco masterpiece, BOOGIE IN BLACK & WHITE (Jin 9014), a collaboration between Rod Bernard and Clifton Chenier in 1976. Always the local legend, Warren has, throughout the eighties, been called upon to furnish the necessary tempo to many local producer's sessions, including Floyd Soileau's JIN and MAISON de SOUL labels, or put in an appearance at a Cajun or Zydeco festival, including the annual New Orleans Jazzfest. It was during one of those sessions that producer Floyd Soileau mentioned that he had recorded just about every Swamp Pop

Legend at one time or other, except Warren Storm, and that he would love an opportunity to do an album project with him whenever he'd be free of other producer's contracts. And thus, this album was recorded in Lafayette in 1991. Selected for this album were some of Warren's regional hits as well as fan requested favorites he sings nightly. The album is dedi-cated to all his faithful fans over the years. At fifty-five now, one wonders how long he can keep up the gueling pace, night after night. If you ask Warren, though, he'll tell you, "Until they pry these drumsticks from my cold and stiff fingers. 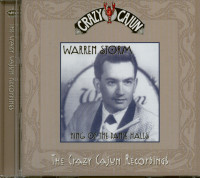 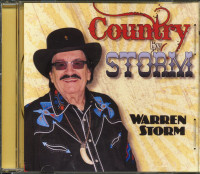