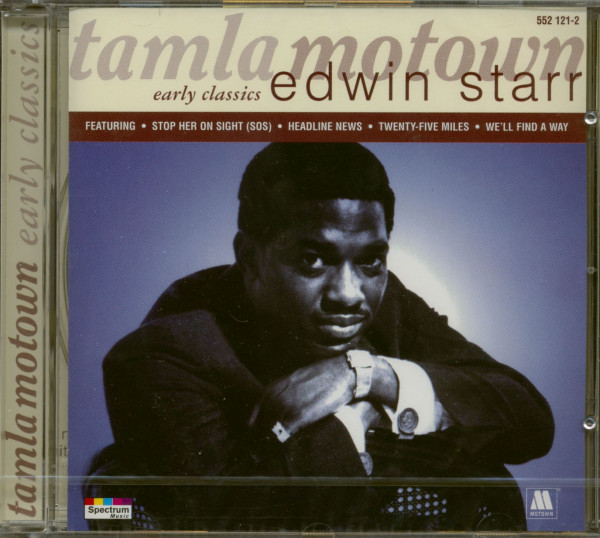 Motown wasn't the only label in Detroit pumping out mid-'60s hits. Big Ed Wingate's Ric-Tic label released great records that sounded a lot like what was going on over at Hitsville U.S.A.--which makes sense, since various moonlighting Funk Brothers often played on them. Ric-Tic boasted a singer in Edwin Starr whose pipes were powerful enough to knock down the walls of any recording studio.

Born Charles Edwin Hatcher in Nashville on January 21, 1942, Starr grew up in Cleveland and sang with a vocal group, The Future Tones, from 1955 to 1960. Bill Doggett's manager, Don Briggs, saw Edwin with them and offered him a gig singing with the organist's combo. "It was less money than I was actually making,” said the late Starr, "but it was a lot more experience. So I got a chance to get my road experience by traveling with Bill for two-and-half-years.”

While in New York with Doggett, Edwin went to the movies on his day off and found the inspiration for his first hit. "The movie just happened to be 'Agent 007,' you know, the James Bond movie,”  he said. "I watched the movie like three times, and then I went back to my hotel room, and was sitting there contemplating on the idea of what the movie was all about and trying to figure out how to incorporate that into a song. And I came up with 'Agent Double-O Soul.'” Doggett wasn't interested in recording it with Edwin, so the young singer quit. Detroit deejay LeBaron Taylor was his conduit to a solo contract. "He introduced me to Ed Wingate, and from there they signed me to Golden World and created the label Ric-Tic,” said Starr.

Edwin's hunch about the brassy dance outing Agent Double-O Soul was on the money. It cracked the R&B Top 10 and just missed the pop Top 20 for him in mid-1965. Starr hit again in early '66 with Back Street. Stop Her On Sight (S.O.S.), powered by a hard-driving Sonny Sanders arrangement that pushed Starr's fire-and-brimstone vocal, made it three in a row, going to #9 R&B and #48 pop. He shared writers' credit  with producers Richard Morris and Al Kent (under his real name of Al Hamilton).

"The initial thought of the song was, 'S.O.S.—Sending Out Soul,'” said Starr. "Richard and I changed it to 'Stop Her On Sight' to make it like a girl/guy song. But the whole idea of the song came from the television program '20,000 Leagues Under The Sea.' 'Cause I was laying watching that, and they did the Morse Code thing on the TV show. And that's where I got the idea for the record.”