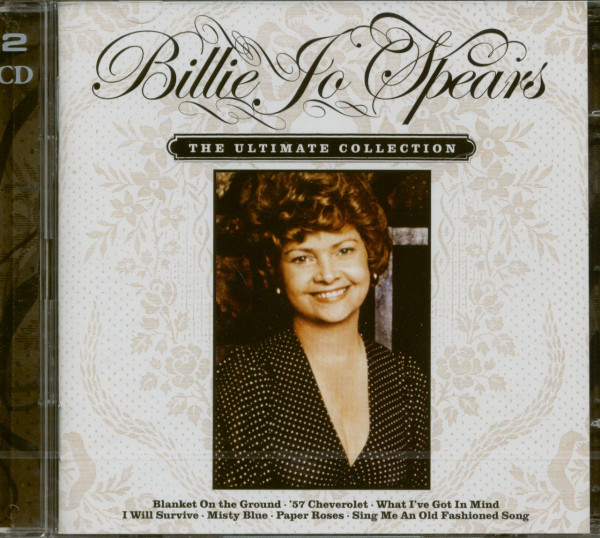 Please inform me as soon as the product is available again.
$13.80 *

Billie Jo Spears is best known for her sexy 1975 #1 hit "Blanket on the Ground." Although she has not been on the U.S. country charts since 1984, she has enjoyed a con-siderable following in Great Britain since her first appear-ance at England's Wembley Festival in 1977.

Born Billie Jean Spears, she began her professional career at age thirteen in 1950, when she appeared at Houston's Keel Auditorium with a number of other country artists.

In 1953, as Billie Jean Moore, she made her first recording, "Too Old for Toys, Too Young for Boys," for Abbott Records (the flip side was cartoon voice-over master Mel Blanc's "I Dess I Dotta Doe"). She appeared on the Louisiana Hayride performing the song.

In 1964, at the urging of songwriter–talent scout Jack Rhodes, she moved to Nashville. Shortly afterward, A&R man Kelso Herston signed her to a recording contract with United Artists Records. In 1966 she followed Herston when he moved to head the Nashville office of Capitol Records.

During her stint with Capitol from 1966 to 1972, Spears scored her first Top Ten country hit, "Mr. Walker, It's Over," but felt typecast by uptempo, humorous material. Between 1972 and 1974 Spears recovered from prob-lems with her vocal cords and recorded for the small Brite Star and Cutlass labels.

She didn't begin to hit the Top Twenty regularly until after returning to United Artists in 1974. Though Kelso Herston re-signed her to the label, it was Larry Butler (who soon replaced Herston as label head) who produced her fairly successful string of United Artists hits that ran through 1980.

"Blanket on the Ground" — with backing vocals from the Jordanairs and steel from Pete Drake — became her trademark hit, and its success led to her being named the Academay Of Country Music's Most Promising Female Vocalist in 1976.