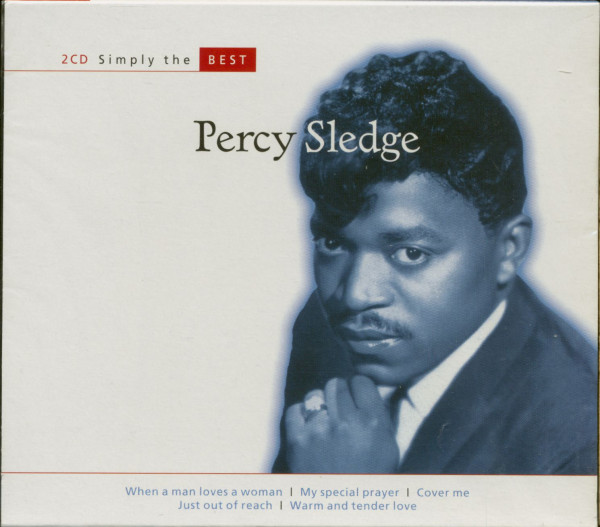 When A Man Loves A Woman

When A Man Loves A Woman

Percy Sledge wrote and sang with spine-chilling intensity one of the greatest and most enduring soul ballads of all time, even though his name is nowhere to be found as the composer of When A Man Loves A Woman.

Born November 25, 1941 in Leighton, Alabama, Percy was another secular convert. "I started in church, like most all of us did,” he says. "Then I would sing in choir in church, growing up as a boy.” Percy looked up to his cousin, soul singer Jimmy Hughes. "I used to worry Jimmy to death about trying to help me get a record,” says Sledge, who wasn't seriously contemplating a musical career until his job as an orderly at Colbert County Hospital dried up.

"I got laid off, and James Richard, who was the music director at Sterling High School, called me up the same day I got laid off and asked me would I be interested in sitting in for his vocalist, because his vocalist was sick and he was doing a private party that Christmas Eve,”  he says. "And I told him I had never sung before in my life with no horns and guitars and drums. Which I hadn't. I always sung acappella, just me and the guys on the sidewalk. He told me, 'Well, I'll pay you $50.' I said, 'Well, what time do you want me to be there?' That was a lot of money in those days.”

The band was called The Esquires, its members including bassist Calvin Lewis and organist Andrew 'Pop' Wright. As the evening progressed, Percy downed a few drinks and began to improvise. "I made up this song, 'Why Did You Leave Me Baby,'”  hesays. "For the lyrics, I just throwed something in there.”  WLAY deejay Quin Ivy dug his performance. "He liked the melody,” says Percy. "He told me if I was to put some strong lyrics behind that melody that I was singing, I might have a hit record.

"He was building a small studio right behind Abrams Department Store in Sheffield, and he asked me, would I be interested in cutting a record. And I told him yes. He said, 'Well, you get some lyrics for that song, and when I get through with my studio, you'll be the first!' So I went back to him, I guess about three or four weeks later, and he asked me, 'Percy, have you got the lyrics for that 'Why Did You Leave Me Baby?'' I said, 'No, I told you it's about a girl I used to be in love with. You know how it is when a man loves a woman. He can't think!' He said, 'Hey! That's it right there! Hold it right there!' So he thought that that would be a great title.”

Ivy's primitive Quinvy studio was where When A Man Loves A Woman was committed to tape, Muscle Shoals regulars Roger Hawkins on drums and Spooner Oldham on organ. Writers' credit went to Esquires Wright and Lewis. Producer Ivy took the tape to Fame Studios head Rick Hall, who got so excited that he called up Jerry Wexler and guaranteed When A Man Loves A Woman was a number one smash. Hall was right on the mark: it soon sat proudly atop both the pop and R&B hit parades on Atlantic.