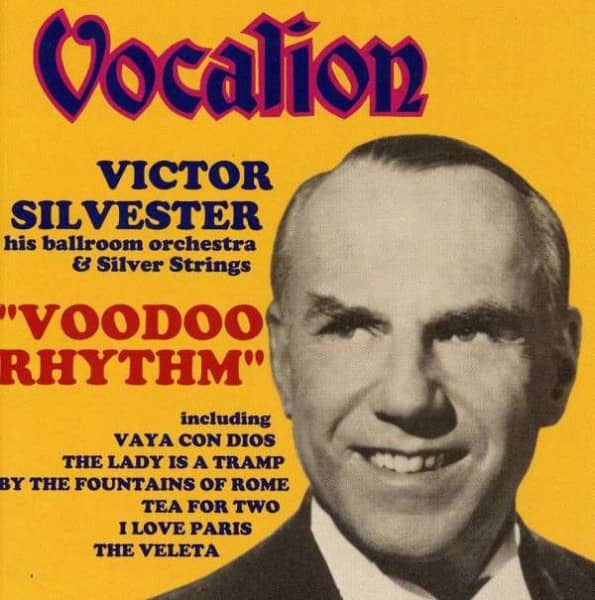 Victor Silvester became very popular throughout the world with his unique style in strict tempo records for dancing. In the thirties and forties he only had one other strict tempo orchestra in competition with him. Namely that of Josephine Bradley whose orchestra was sometimes directed in the recording studio by Geraldo. Silvester had learned the piano as a boy, studying at the London College of Music. This proved to be a great asset in the forming of his orchestra. The master began his career as a dancing instructor at a salary of one pound per week. At the age of twenty two Silvester won the World Dancing Championship and opened his new dancing school in Bond Street, London People came from all over the world to learn dance there.
The success of his records in Britain soon spread to Europe, Australia, South Africa, and even in India they were doing the Quickstep! All the dancing schools were using his records. Year after year Silvester's records were top sellers in numerous countries and were also used in cinemas, theatres and skating rinks. This outstanding popularity of Victor's records automatically meant that the BBC were anxious to secure his services and in 1941 he devised the world famous radio programme "The Dancing Club", to which some 0 10,000,000 listeners tuned in to his weekly broadcasts. BOB ELDRIDGE

$14.15
Customers also bought
Customers also viewed
Voodoo Rhythm
Tracklist
Silvester, Victor & Orchestra - Voodoo Rhythm CD 1
01 Marie
02 Someone else's roses
03 My favourite song
04 As long as I live
05 Paraguana
06 Cuban rhythm
07 That certain feeling
08 Domino
09 I love Paris
10 C'est magnifique
11 The Veleta
12 My foolish heart
13 Bolivia
14 No one can change destiny
15 Without that certain thing
16 St=Bernard waltz
17 My love's a gentle man
18 By the fountains of Rome
19 Vaya con Dios (May God be with you)
20 We'll find a way
21 Voodoo rhythm
22 Something happened to my heart
23 The lady is a tramp
24 Pretend
25 Tea or two
26 Three o'clock in the morning