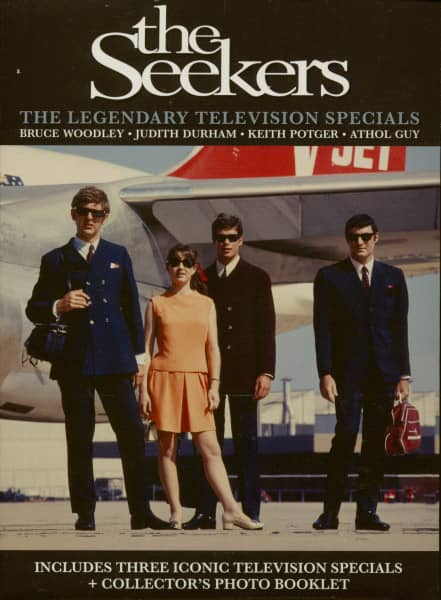 Please inform me as soon as the product is available again.
$40.35 *

In 2018, to mark the 50th Anniversary of The Seekers being named Australians of The Year and their shock break-up, their three classic, Sixties Australian television spectaculars are available as a complete, collector's set.

1966's 'The Seekers at Home', 1967's 'The Seekers Down Under', 1968's 'The World of The Seekers', are among the most successful television specials every produced in Australia since television began in 1956; the latter two rank in the list of the Top 20 Most Watched Shows of the 20th Century.

The meteoric rise to international fame by Australia's most successful pop music export will unfold before your eyes, as you watch them transition from a Melbourne folk group to chart-topping international superstars whose success rivalled The Beatles and The Rolling Stones.

All the hits and more - 'I'll Never Find Another You', 'A World of Our Own', 'The Carnival is Over', 'Morningtown Ride' and 'Georgy Girl' - as well as a precious glimpse of what Australia was like so many decades ago.

The hard work in putting together this three-in-one set, as well as a lavishly-produced collector's edition booklet, has been done for you. All you have to do is push 'play' ... and enjoy!