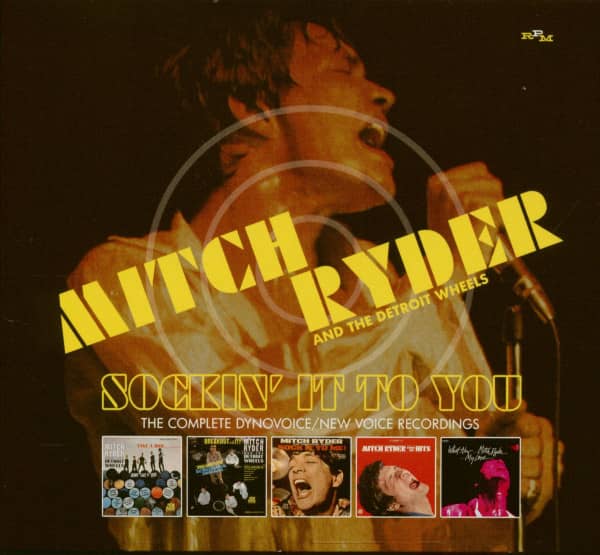 Mitch Ryder & Detroit Wheels: Sockin' It To You: The Complete Dynovoice Recordings (3-CD)

The most detailed overview of the hit career of Mitch Ryder & The Detroit Wheels. This is the first CD collection to include all the albums he recorded between 1966 and 1969 for the labels Dynovoice and New Voice of Bob Crewe. Sockin' It to You' contains three CDs with all five albums for Crewe as well as all non-LP 45 releases, including one LP and several single-side CDs, which make their CD debut here.

As a "white soul shouter from Detroit" (Rolling Stone) Mitch Ryder made a career with rock'n'roll in the mid 60s. Supported by his Detroit Wheels, he sold six million records by 1968 and placed four times in the top 10 of the USA in just 14 months. By decision of his management, Ryder found himself a soloist in Las Vegas. The musician, who was often described as difficult and uncomfortable, needed many years and the detour via Europe in order to gain a foothold artistically and economically.

His sometimes critical songs might have prevented a comeback in his homeland. He had better luck in Germany. The Hamburg label Line Records not only distributed Ryder's albums, but also took care of the underrated rock singer, such as the 1988 recording of RED BLOOD, WHITE MINK from the Palast der Republik in East Berlin.

The first bands of Mitch Ryder

The first bands of Ryder, born as William Sherille Levise Jr. in Detroit, Michigan on February 26, 1945, were Tempest and Peps. With them he played a rough, hard Rhythm & Blues. Already at the age of 16 he decided to pursue a professional career. Ryder founded BIN Lee And The Rivieras with John Badanjek (dr), Jim McCarty (g), Joseph Cubert (g) and Earl Elliott (b).

They recorded the single Tool For You' for the local gospel label Carrie Records. Frontman Levise Jr. was quickly respected as a white soul singer, and his group became the house band at Walled Lake Casino in 1964. Hyland Records released 'Do You Want To Dance'. The single caught the attention of disc jockey Dave Prince, who sold the Rivieras to New York producer Bob Crewe (* Four Seasons). Crewe brought the group to New York and ordered six months of rehearsals.

He found the stage name Mitch Ryder in the phone book, and to avoid confusion, he recommended abandoning the name Riviera and replacing it with Detroit Wheels, which he thought was more contemporary. The debut single 'I Need Help' was released in July 1965.

Jenny Take A Ride' (US #12), an energetic medley from Little Richard's Jenny Jenny and C. C. Rider' by Chuck Willis, became a top hit at the beginning of 1966 and was called "High Energy Rock" (Rolling Stone). The album JENNY TAKE A RIDE and the second single 'Little Latin Lupe Lu' (US #13), originally by the Righteous Brothers, confirmed this. In March 1966 Elliott and Kubeck were drafted into the army and had to be replaced by Jim McCallister (b) and Mark Manko (g).

Under the name Detroit, Ryder formed a seven-piece hard rock group in 1970, whose album THE DETROIT EXPERIMENT received very good reviews. But the fans were irreconcilable. Detroit split up, Badanjek and McCarty met again at the Rockets. Supposedly three million dollars in debt, Ryder disappeared.

He worked on a tape for an automobile company and settled in Denver, Colorado, in 1973. In 1978 Mitch Ryder founded the independent label Seeds & Steams Records with producer Tom Conner. Conner was also co-producer of Ryder's comeback album How I SPENT MY VACATION, which featured a band of eight musicians. Ryder interpreted mainly autobiographically influenced songs with a smoky timbre to relaxed, blues-soaked rock.

Especially the ballad 'Freezin' In Hell' attracted attention. Ryder presented the new material to an audience of millions on 6 October 1979 at the Rockpalast TV spectacle.

At least in Europe it was again en vogue to attend Ryder concerts. He toured Germany regularly in the 80s and released a number of rock albums. Outstanding songs were: 'Ain't Nobody White' from NAKED BUT NOT DEAD, 'Ich bin aus America' ('Got A Change For A Million?'), 'When You Were Mine' Meyer Kick A Sleeping Dog'). When You Were Mine' (US #87) was composed by Prince and the album was produced by John Mellencamp. Visitors to Ryder concerts were not safe from surprises.

Excessive alcohol consumption of the star and desperate insults of the audience sometimes led to the break off of a show. Ryder was one of the first international rock stars to play in the former GDR in January 1988. In 1994, there were controversial discussions about the song 'Mercy' from the album RITE THE PASSAGE, about Dr. Jack Kevorkian, who had caused a stir in the US press as a "suicide doctor" (Rolling Stone).

Ryder has always been able to assert itself better in the club atmosphere than in large halls or at festivals. This is documented by the recording LIVE AT THE LOGO HAMBURG with "bristly guitar rock, straightforward and straight out of the belly played" (Musik Express).

$16.92
Customers also viewed
Sockin' It To You: The Complete Dynovoice Recordings (3-CD) 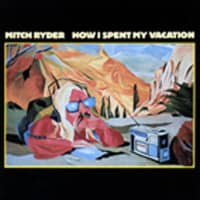 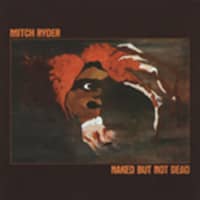 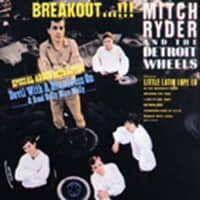 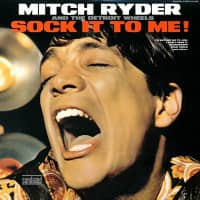