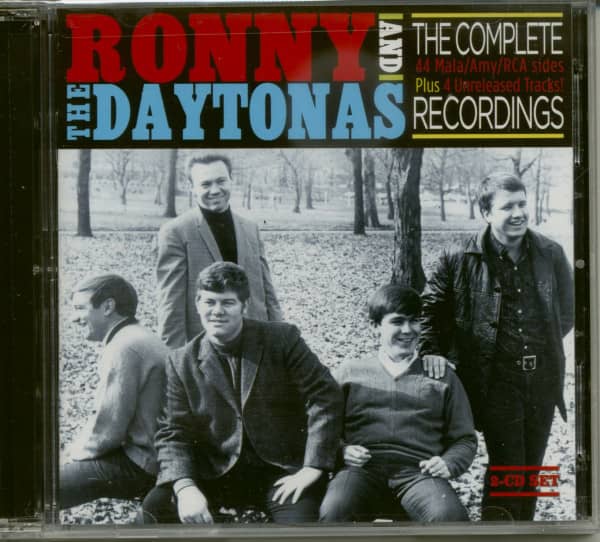 (2015/Real Gone) 48 tracks. 44 Mala-Amy-RCA sides plus 4 unreleased tracks.
Two CD collection. Better put a little more octane into your car stereo, because here come 48 tracks from Nashville's greatest contribution to surf and hot rod music, Ronny and The Daytonas! 'Ronny' was singer-songwriter-guitarist John 'Bucky' Wilkin, who wrote their first hit, 'G.T.O.' while attending physics class as a senior in high school; his mom, country songwriter Marijohn Wilkin, then landed him a session with producer and former Sun session saxophonist Bill Justis that yielded the #4 chart smash. Justis became the group's producer for their recordings on the Amy label imprint Mala, which featured Wilkin and a rotating cast of characters, the most prominent of which was frequent co-writer Buzz Cason. Though Ronny and The Daytonas never notched another hit as big as 'G.T.O.,' their infusion of country twang put a unique spin on mid-'60s surf 'n' drag music, and their use of strings and willingness to cut ballads alongside the requisite up-tempo fare showed that Wilkin refused to be pigeonholed. His move towards a more personal style accelerated with the band's move to the RCA label, where Wilkin assumed producer duties, culminating in the 1966 solo 'Delta Day'/'I Wanna Be Free' single (included here as bonus tracks), which reflected Wilkin's eagerness to embrace the folk-rock sounds that were in the air at the time. Now, Real Gone Music has assembled a set that includes every single A and B-side and unique album track recorded by Ronny and The Daytonas-just like the title says, The Complete Recordings! But even that title doesn't really do the set justice; in addition to all the group sides we've included Bucky's solo sides, two tracks ('Tiger-A-Go-Go' and 'Bay City') recorded under the moniker Buzz & Bucky, and four unreleased tracks, all but two taken from the original mono tapes and remastered by Vic Anesini at Sony's own Battery Studios. The ultimate look at one of the all-time great surf combos!