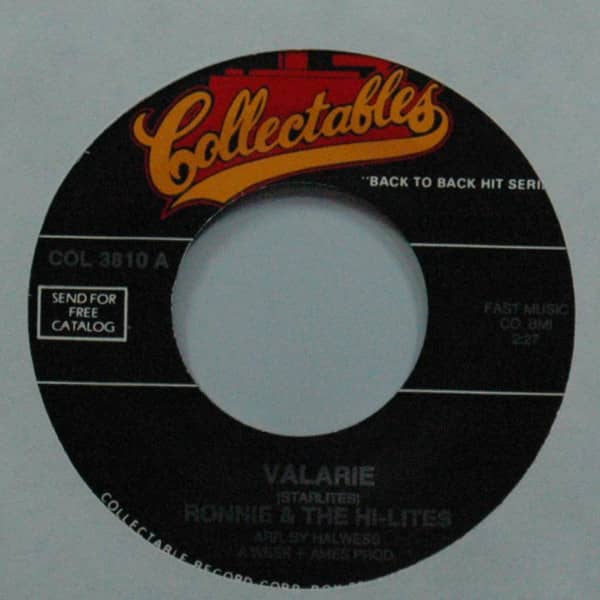 Ronnie & The Hi-Lites: Valarie b-w The Fact Of The Matter 7inch, 45rpm

I Wish That We Were Married

The high tenor 'kiddie lead' sound still possessed appeal for group fans. When Ronnie and The Hi-Lites came together at Public School 14 in Jersey City, New Jersey, lead singer Ronnie Goodson was only 12 years old. He was preceded by tenors Sonny Caldwell and John Witney, baritone Stanley Brown, and bass Kenny Overby, all in their teens. They initially called themselves The Cascades.

The turning point was when the group joined forces with arranger/producer Hal Weiss and his wife Marian. It was her idea to rechristen the group Ronnie and The Hi-Lites, and she co-penned I Wish That We Were Married for her charges. Eddie Joy's self-named Joy Records put out the group's weepy, violin-enriched debut ballad in early 1962 with Twistin' And Kissin', a zippier Weiss/Lewis composition, on the flip. Hal arranged and produced the single, Joy spelling his surname as Wess on the label, and watched it sail all the way to #16 pop that spring.

It was a one-time affair. Joy tried again that summer with the group's relaxed Be Kind, but it never made it past 'Bubbling Under' status. The upbeat Send My Love (Special Delivery) written like the plug side by Marion, might have been a better bet. After a revival of The Starlites' teary Valerie for the Raven logo, Ronnie and his Hi-Lites moved to the Weisses' own Win label in Jersey City, debuting there with A Slow Dance, which again bubbled under during the summer of '63. On The Fact Of The Matter that fall, The Hi-Lites shared billing with a second group, The Corals (must have been a crowded studio). They lost Brown along the way; he was replaced first by Bill Scruggs, then Richmond Charles. High School Romance was the group's last Win offering, Ronnie's voice noticeably maturing as time went by.

Goodson briefly went solo, waxing the soul-oriented I Wouldn't Give A Nickel for Uptite (Marion was still his chief songwriter), but that didn't revive his flagging career. He died of a brain tumor on November 4, 1980, only in his early 30s.