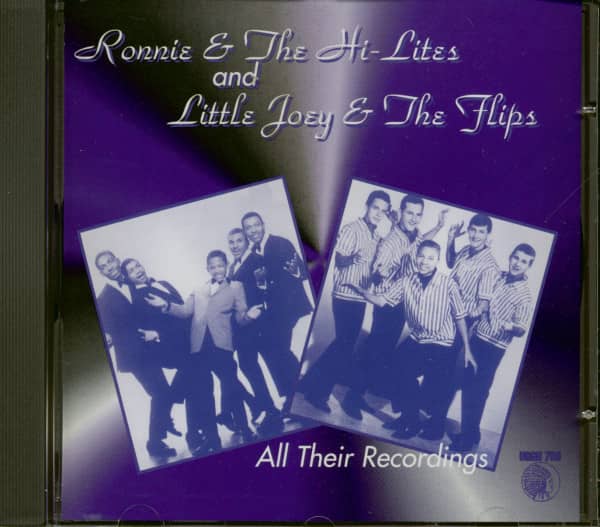 This article is deleted and can no longer be ordered!
Please inform me as soon as the product is available again.
P Secure bonuspoints now
Description
Learn more about Ronnie & The Hi-Lites
Review 0
Description
(UGGH) 23 tracks  - An overlooked group of the early '60s, Ronnie and the Hi-Lites had a... more
Close menu

(UGGH) 23 tracks
-
An overlooked group of the early '60s, Ronnie and the Hi-Lites had a short career but a lot of talent. That talent was developed in the late 1950s in Jersey City, New Jersey, where Sonny Caldwell (18, first tenor), John Witney (17, second tenor), Stanley Brown (17, baritone), and Kenny Overby (17, bass) started out as the Cascades.

The teenagers made their singing headquarters at Public School 14. John saw a young vocalist named Ronnie Goodson in a school play and knew that he'd make a great "kiddie" lead. 12-year-old Ronnie joined up and the group began practicing Ffankie Lymon And The Teenagers songs in John's basement. Ronnie, whose style came from his solo- ing at the Salem Baptist Church, led the group members through their first talent contest (which they won) singing Little Anthony and Frankie Lymon songs at P.S. 14.

The Cascades then came to the attention of arranger Hal Weiss and his songwriting spouse Marian. The group auditioned with the Starlites' "Valerie," and Mrs. Weiss was so impressed by Ronnie's charisma and professional sound that she began to write a song for him. She renamed them Ronnie and the Hi-Lites and spent months crafting just the right vehicle for Ronnie's lead. The song that finally emerged was "I Wish that We Were Married," a ballad that invited anemotion-laden treatment. And that's exactly what Ronnie brought to their recording of the song. In 1961 Atlantic and ABC Records both passed on the Hi-Lites' cut, but Eddie Joy of Joy Records liked it and issued the single in the early winter of 1962.

On March 10th, a Billboard reviewer com-mented: "The 14-year-old lad sings with feeling and heart on moving rock-a-ballad with teen-appeal lyrics about young couples who are too young to wed." "I Wish" broke out of Philadelphia and Trenton with an extra boost from the group's appearance on "American Bandstand." On March 31st it charted and rose to number 16 nationally. Selling over half a million copies, the song put 14-year-old Ronnie and company on the map, paving the way for perfor-mances alongside The Crystals and The Spanielsd at such venues as the Apollo and Palisades Park.

But their rise to the big time lasted only a short time. The follow-up single "Be Kind" received good air-play but died at number 120 in July. Then a single on Raven failed, and a doo wop ballad called "A Slow Dance" fizzled out at number 116 in August 1963, even though it went top 10 in several eastern cities. "A Slow Dance" was the first release on Hal and Marian Weiss's own Win label, based at 27 Stegman Place in Jersey City. By now Bill Scruggs had replaced Stan Brown. Scruggs himself was soon replaced by Richmond Charles. Two 1963 releases, "The Fact of the Matter" and "High School Romance," were unsuccessful. Still, the group kept working, and they appeared oppo-site Stevie Wonder, Major Lance, and Ronnie's girlfriend Eva Boyd, better known as Little Eva ("The Locomotion").
When the group graduated from high school, some joined the service and others went to work. Ronnie did one solo single, "You Keep Me Guessin'," for the Uptite label (Hal Weiss had become ill and Marian had shut down Win to take care of him). Ronnie had been ill on and off for years and had undergone several operations for a recurring benign tumor.

But he kept working, giving his all in every performance. On one night he couldn't continue, and rather than deny the audience a full show he asked Mrs. Weiss, who was a singer and knew all his songs, to fill in on lead with the Hi-Lites. Sonny Caldwell became a computer programmer in California. Kenny Overby also ended up out West. John Witney became a diesel mechanic in Harrisburg, Pennsylvania. Richmond Charles be-came a phone company representative and Bill Scruggs a Secaucus, New Jersey, security guard.

I Wish That We Were Married

The high tenor 'kiddie lead' sound still possessed appeal for group fans. When Ronnie and The Hi-Lites came together at Public School 14 in Jersey City, New Jersey, lead singer Ronnie Goodson was only 12 years old. He was preceded by tenors Sonny Caldwell and John Witney, baritone Stanley Brown, and bass Kenny Overby, all in their teens. They initially called themselves The Cascades.

The turning point was when the group joined forces with arranger/producer Hal Weiss and his wife Marian. It was her idea to rechristen the group Ronnie and The Hi-Lites, and she co-penned I Wish That We Were Married for her charges. Eddie Joy's self-named Joy Records put out the group's weepy, violin-enriched debut ballad in early 1962 with Twistin' And Kissin', a zippier Weiss/Lewis composition, on the flip. Hal arranged and produced the single, Joy spelling his surname as Wess on the label, and watched it sail all the way to #16 pop that spring.

It was a one-time affair. Joy tried again that summer with the group's relaxed Be Kind, but it never made it past 'Bubbling Under' status. The upbeat Send My Love (Special Delivery) written like the plug side by Marion, might have been a better bet. After a revival of The Starlites' teary Valerie for the Raven logo, Ronnie and his Hi-Lites moved to the Weisses' own Win label in Jersey City, debuting there with A Slow Dance, which again bubbled under during the summer of '63. On The Fact Of The Matter that fall, The Hi-Lites shared billing with a second group, The Corals (must have been a crowded studio). They lost Brown along the way; he was replaced first by Bill Scruggs, then Richmond Charles. High School Romance was the group's last Win offering, Ronnie's voice noticeably maturing as time went by.

Goodson briefly went solo, waxing the soul-oriented I Wouldn't Give A Nickel for Uptite (Marion was still his chief songwriter), but that didn't revive his flagging career. He died of a brain tumor on November 4, 1980, only in his early 30s.