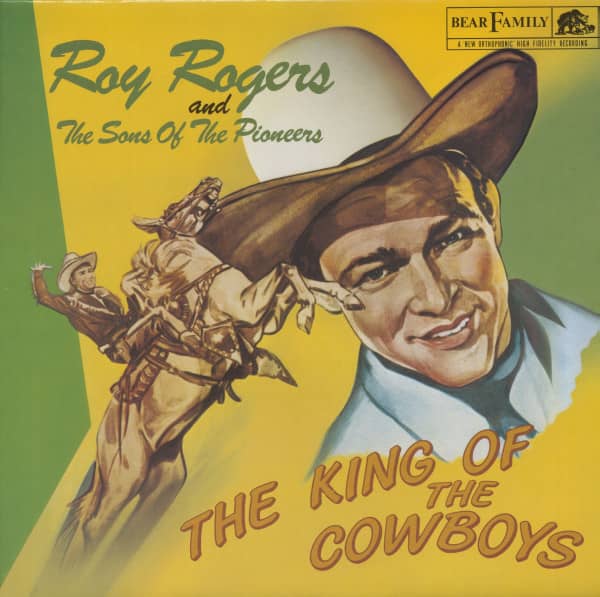 Roy Rogers And The Sons Of The Pioneers: The King Of The Cowboys (Vinyl)

Article properties: Roy Rogers And The Sons Of The Pioneers: The King Of The Cowboys (Vinyl)

Long before he could celebrate his first hit parade success, Leonard Slye aka Roy Rogers, was famous in America as "King Of The Cowboys". He began his musical career in 1931 as a member of Uncle Tom Murray's Hollywood Hillbillies. He sang with the International Cowboys, the Rocky Mountaineers, the O-Bar-O-Cowboys, the Texas Outlaws and finally became one of the four founding members of the probably most famous Western singing group, the Sons Of The Pioneers. However, he left it as early as 1938 to devote himself entirely to the film business in Hollywood.

The first film starring Roy Rogers was called "Under Western Skies" in 1938. Roy Rogers quickly became a Western hero and idol of an entire generation. By 1951 he had appeared in 88 films, mostly together with his horse "Trigger", which can now be admired stuffed in the Roy Rogers Museum. Many of his old films were shown again and again in the ZDF series "Western From Yesterday".

Although Roy Rogers has always appeared as a singer in his films, he has nevertheless become more famous as a film actor. His records were always just by-products of his film work. When the great time of the singing film cowboys came to an end in the 50's, Roy Rogers also became calm. A comeback in 1970 with country music brought him only temporary success in the country charts. Roy Roger's records as a soloist and as a member of Sons Of The Pioneers are important for the friends of country music."

Review 0
Read, write and discuss reviews... more
Close menu
Customer evaluation for "The King Of The Cowboys (Vinyl)"
Write an evaluation
Evaluations will be activated after verification.
Weitere Artikel von Roy Rogers And The Sons Of The Pioneers
Roy Rogers: Blues On The Range Art-Nr.: LPCCR1026