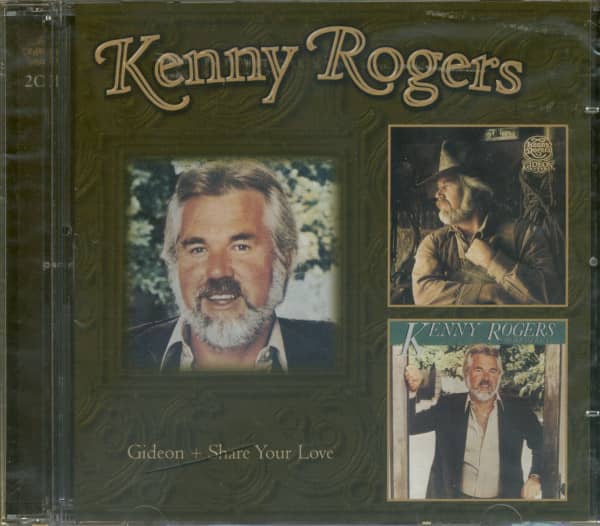 This article is deleted and can no longer be ordered!
Please inform me as soon as the product is available again.
P Secure bonuspoints now
Description
Learn more about Kenny Rogers
Review 0
Description
(2009/Edsel) 24 tracks - originally sealed This is the fourth of five Edsel packages that... more
Close menu

This is the fourth of five Edsel packages that reissue the ten solo albums by country superstar Kenny Rogers,released on the United Artists and Liberty labels at the height of his wordwide popularity between 1976 and 1983.

Released during the rise of Black Power, Ruben James was a sepia-toned snapshot of an America rooted in shared rural values, and thus had limited relevance to whites fleeing the downtown core or blacks under martial law. "I remember mules, remember them well," wrote Barry Etris, who grew up around Alpharetta, Georgia. "When my father was [plowing], he used every cuss word in his vocabulary. Sometimes, I would watch him. He would be bare to the waist, wearing faded cut-off khakis and lace-up work boots. As he retreated down a long row in the prime of his manhood, tanned and golden in the sun, with his broad back and muscular arms controlling the single-tree plow, I thought he looked like Apollo driving his chariot across the sky. I didn't know then that the Gods die, that we would someday find Apollo lying on his back in a furrow beside his steed with the reins still in his hands, never to rise again." Etris's song about his father made its way to United Artists (Unart) Music in Nashville, run by Billy Edd Wheeler, the writer of Jackson, Ode To The Little Brown Shack Out Back, etc. Another songwriter at Unart, Alex Harvey, worked for Wheeler. "Billy's the one who taught me how to write songs," Harvey said later. "When I think back to Beethoven, Tchaikovsky, Rachmaninoff, I hear simple melodies. Rimbaud, Frost, and others wrote simple but profound poems.

That's what I was after. I was there when Barry Etris brought in 'Ruben James.' It was a song about a white man, and it didn't really work. Billy said, 'Can you do something with this?' Across from my dad's little country store in West Tennessee, was a blacksmith shop run by a couple of black men. When my dad got tuberculosis, those men became my fathers. And when my dad was born, his mother couldn't make milk, and a black woman named Majula lived not far from them, and she'd just had a baby, Jimmy Lee, so my dad suckled one breast and Jimmy Lee the other." Billy Edd Wheeler sent the song to Unart's west coast manager, Eddie Reeves, who pitched it to Kenny Rogers by following him around a golf course singing it. Rogers had followed But You Know I Love You with Ruby, Don't Take Your Love To Town. He followed Ruby with Ruben James, and it reached #26 on the pop charts. All was not well in the studio. "I saw what condition their condition was in," their producer Jimmy Bowen wrote, "and it was not good. Kenny, Mike Settle, and Terry Williams got into a screaming match over the harmony parts that turned into a fist-fight." Thelma Camacho quit, and among those auditioning to replace her was Karen Carpenter. Mike Settle left soon after Ruben, and the personnel changed rapidly until the First Edition split in 1974. Since 1969, Ruben James has mostly been recorded by country artists, including Johnny Cash, Conway Twitty, Glen Campbell, and Jerry Lee Lewis.

As a postscript, Reuben James was an early nineteenth century American naval hero who had three ships named in his honor. When one of them was sunk in 1941, Woody Guthrie wrote the first song titled Reuben James; in fact, the First Edition's record might have been spelled Ruben James to differentiate it. Title aside, the two songs bear no relation each other.