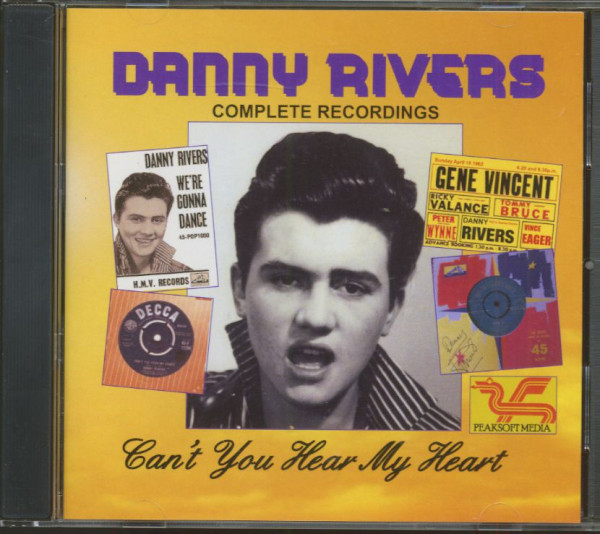 David Lee Baker a.k.a. Danny Rivers was born in Liverpool on November 7, 1942. As it was during the war and Liverpool was a major target for the enemy, David's family decided that heading south was a more favourable option and they moved to West Hampstead in London. As Danny once remarked, ''If you got bombed in West Hampstead there was a better class of cemetery!'' David's schooldays were spent with much of his spare time as a patrol leader in the boy scouts. The ex-Shadows drummer Tony Meehan was in the same patrol. Like many teens of the mid to late 1950s, David Lee Baker was captivated with not only the sound, but also the appearance of Elvis Presley. His own dark sultry looks were not dissimilar to those of Elvis, but the crowning glory was his comparable voice, and it was to be this combined similarity that prompted him to embrace the characters Elvis portrayed in two of his hit movies: Danny from 'Danny Fisher' in 'King Creole', and Rivers from 'Deke Rivers' in 'Loving You'. Complete with Elvis looks and sound, Danny Rivers felt he was well equipped to make name for himself on the British Rock'n'Roll scene. There were, however, other aspects of Elvis' personality that Danny possessed, with his sense of humor and humility playing a large part in his success. Danny had both in abundance and they would come to play a major role in his future. It's often the persona and not the personthat's imperative to opening the door to success and Danny proved this, with his being integral to his popularity. Danny's talent, coupled with his charisma and sense of fun, soon began to pay dividents when on winning a talent contest at the Finsbury Park Top Rank Ballroom, he took first prize of a week's booking at Butlin's Holiday Camp in Filey. It was here he first met up with Chas Hodges, later to be part of Cockney rocking duo Chas & Dave, but it was at a booking at the Top Rank in Kilburn where things really took off, for in the audience were two of the most influential men in the music industry at that time, Larry Pames and Joe Meek. Parnes was the manager of Tommy Steele, Marty Wilde, Billy Fury, and Joe Brown. Joe Meek was enjoying record success with artists such as John Leyton, Heinz and the Tornados. They both offered Danny management and recording contracts and both were rejected by Danny's father, as he didn't trust either of them. It didn't discourage Parnes and Meek, however, and they offered Danny touring shows, recordings and TV appearances in an effort to woo his father into putting pen to paper.

The popular 1950s BBC programme 'Six-Five Special' was the first TV show geared towards the younger generation. As popular as it was, its producer Jack Good was not, at least with his BBC white-collar bosses. Jack resigned and joined the new independent television company ATV. His remit from ATV was to produce 'Oh Boy',which was to become the benchmark for future television Pop shows worldwide. With top American recording artists flying in to appear alongside leading British performers, Jack became the world's number one TV Pop show producer and it was he who saw Danny's qualities and offered him appearances on another of his TV shows, 'Wham'. Jack, being an eccentric and fun guy, immediately hit it off with Danny, who had similar qualities. Danny's first (and favorite) recording, 'Hawk', attracted little attention, but his second, 'Can'tYou Hear My Heart', received the plaudits it deservedand entered the top 30. The success of this release and Danny's dynamic performances on 'Wham' soon found him in demand for stage showswhere he supported British hit-makers such as Marty Wilde, Billy Fury and Johnny Kidd, along with American performers such as Gary U.S. Bonds, Johnny Burnette and Gene McDaniels. Three more singles, including the critically acclaimed 'My Baby's Gone Away', failed to chart, and a track on a compilation CD completed Danny's output. 1963 witnessed the arrival of The Beatles and the decline of the solo performer and alongside many other solo artists Danny sought alternative employment He went to work in his father's d-i-y shop before becoming a London black cab driver Following a chance meeting with an old pal in the late 1990s, Danny joined a project covering the life and times of Joe Meek. This led to calls from bookers and bands and it wasn't long before Keith Woods of 'Tales From The Woods' Promotions invited Danny to participate in a 2I's club tribute

show at the 100 Club on Oxford Street. Such was Danny's success in the show that it sparked even more interest in his showbiz fortunes. With more revival shows being produced. Danny and many of his contemporaries suddenly found themselves harvesting a new crop of enthusiasts alongside their original fans. With the support of his wife Emily, Danny's latter-day fan support flourished, and his 30-minute roof-ram, performance to a packed audience at a North London venue, celebrating his 70th birthday, proved that Danny not only still had it, he had it in bucketfuls. His passing on July 28, 2016 shook and shocked those of us who knew and loved him. as he was a larger than life character and a man who would do anything for anyone He was also one of the most talented people I've had the pleasure of knowing and working with, yet due to the short-sightedness of the showbiz hierarchy he never received the accolades and success he deserved. Danny was an enormous talent, and the legacy he leaves us of the live recordings from his 70th birthday bash proves that in the 21st Century he still had it in abundance.