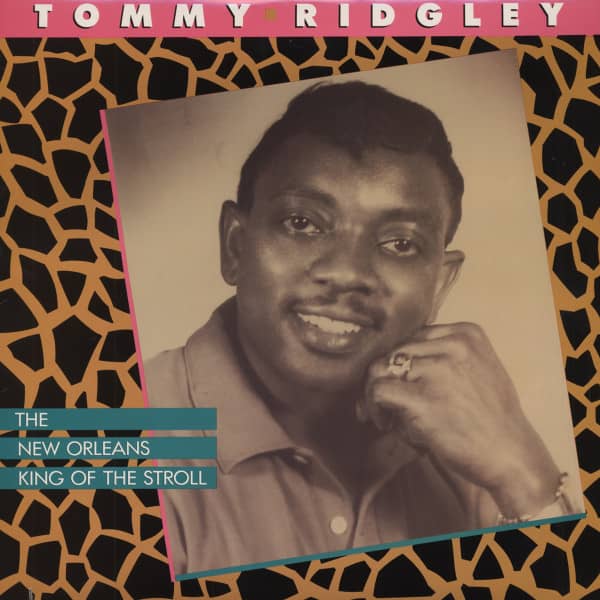 Tommy Ridgley: The New Orleans King Of The Stroll (cut-out)


In 1949, he was effectively called up to the big leagues after Dave Bartholomew hired him to replace Theard Johnson as vocalist in his band. Besides leading the city’s premier orchestra, Bartholomew had also been hired recently as an A&&,R man for Imperial Records, and he chose Tommy Ridgley to sing on his first production. (This was before Bartholomew even knew about Fats Domino).

Tommy Ridgley had a local hit with his first release, “Shrewesbury Blues,” which insured Imperial’s continued interest. He continued to work with Bartholomew‘s band until 1953, when he decided to form his own group, The Untouchables. In the interim, Tommy waxed five more singles for Imperial under his own name. He also appeared on tracks credited to Dave Bartholomew on King and Decca.

Tommy Ridgley had signed with Atlantic by the mid-19505, just missing the national charts with an instrumental, “Jam Up," and the slow burner, “I’m Gonna Cross That River’ By the later portion of the decade, he'd moved over to Al Silvers’ Herald label, just missing again with “When l Meet My Girli’ Tommy wound up on Ric after his Herald singles began to stall, and was granted his release. His tenure at Ric would prove to be perhaps the most fruitful and musically enjoyable portions of Ridgley’s entire career.

“When Mr. Ruffino heard l was available, he sent for me," detailed Tommy. “I've always been the kind of a guy who jumped at the chance to record. l didn’t concern myself too much with contracts or money, l just wanted to see my name on a record!"

On Tommy Ridgley‘s Ric debut, “Is It True" b/w “Let's Talk It Over"- found on Carnival Time: The Best of Ric, Volume I (Rounder 2075 )-he was given the unlikely title, “The New King of the Strolli’ “Joe Ruffino wanted to make that into a stroll record,“ recalled Tommy. “Chuck Willis had just died and Joe thought we had a similar style. That was a very big single for me around New Orleans. l remember Joe Ruffino thought he was pretty shrewd for signing me at that point. Right after the record came out he was saying, ‘We have to get some more songs together and get back in the studio!'”

Tommy Ridgley‘s next session included the fine “Please Hurry Home," another local bestseller. We‘ve also chosen to include an interesting rehearsal of the song, which was taped in the back of Joe Ruffino’s Baronne Street office. Although the rehearsal is definitely raw, the song has a recognizable form and Ridgley‘s voice is topnotch.

Ridgley's string of excellent singles continued with “Should l Ever Love Again,“ a song that was previously recorded on Specialty by Wyonia Carr. “We recorded that right on the spot," detailed Tommy. “We were supposed to cut a new song, but something happened and we couldn’t do it at the last minute. I'd been doing ‘Should I Ever Love Again’ on the bandstand, so everyone was familiar with the tune. I put that little spoken part on the beginning of the record just to make my version different''

One of Tommy Ridgley’s few obscure Ric singles proved to be “The Only Girl For Me" and “Three Times’ Both songs were co-authored by Adolf Smith, a renowned songwriter who was once a member of the Spiders, a vocal group that had recorded earlier for Imperial. “Three Times" is an especially brisk shuffle with some telling lyrics. Two interesting Tommy compositions found on this collection are “Double Eyed Whammy" and “The Girl From Kooka Monga" from 1960 and 1961, respectively. “Double Eyed Whammy” was inspired by Evil-Eyed Fleagle, a character in the Li'l Abner cartoon strip, who cast his patented whammy on people at the drop of a hat. “The Girl From Kooka Monga," of course, was inspired by Jessie Hill‘s “Ooh Poo Pah Doof’ (Oddly enough, Ridgley’s song was actually adopted by Kukamonga, California, who used it as a theme song.) Ironically, Freddy King covered both songs as well.

Eddie Bo's “In The Same Old Way,” which opens side 2, proved to be Ridgley's biggest record on Ric, topping many of the local radio station playlists. “Larry McKinley was responsible for making that a hit,” said Tommy. “He was the hottest jock in town at the time (WYLD-AM) and if he played your record, it was a pretty good chance it would take off'' After Larry got on the record, it got picked up by every other radio station in New Orleans, pop stations and r&&,b stations.

“There was a lot of outside interest in that record," recalled Tommy. “But Joe Ruffino distrusted people from the north. When my record was out, Barbara George had just recorded, “l Know" (for the local AEO. label) but “In The Same Old Way" was selling better down here. Well, Barbara George's record got picked up by another label (Sue Records) and they had a national record. Mine just stayed local''

Ridgley and Ruffino kept plugging, however, following with “My Ordinary Girl," a song purchased from Earl King. Unfortunately, by 1962 Ric‘s schedule of releases was delayed after Ruffino suffered a premature heart attack. Tommy Ridgley only cut four sides that year in one session and three are included here. "Heavenly" was credited to Mac Rebennack, but Tommy Ridgley recalls the song actually being written by a drummer from Raceland, Louisiana, Ironically, Ridgley’s most successful releases from 1962 would prove to be remakes: Bull Moose Jackson's ballad, “l Love You Yes l Do,“ and his final Ric release “I’ve Heard That Story Before,” recorded earlier for Herald Records.

This set closes with a true Tommy Ridgley obscurity, both sides of his ultra-rare Johen single recorded in 1964. After Ruffin0’s death, his brother-in-law Joe Assunto went into the record manufacturing business with Henry Hildebrand, who owned All South Record Distributors. Their primary label was Watch, but they released one record, Tommy Ridgley’s, on a new subsidiary, Johen.

While both sides were truly excellent (“I Want Some Money Baby" taking the soul road, while “All My Love Belongs To You” was right out of the Bobby Bland bag), the record was doomed to obscurity because of Watch/.Johen’s distribution agreement with London Records. “Boy when we got out of the studio we just knew we had a hit," laughed Ridgley, referring to the .Johen single. “Joe Assunto was positive he had just cut a #1, but Dave Bartholomew said, ‘Man, that record ain't going nowhere because London doesn't promote their records “Well, Dave was right because nothing happened. There wasn‘t a thing we could do because the ball was in London's court?

Although Ridgley has recorded for more than a dozen labels, he now looks back at his tenure at Ric Records - and, yes, his stint at Johen-with particular affection. “Those records were professional by anyone’s standards,“ concluded Tommy. “Personally l liked Joe Ruffino, me and him were okay. He was stubborn and had his own ways of doing things, but he could recognize talent when he saw it. He was never the kind of guy that would try and cut corners in the studio like a lot of other guys, and he worked his tail off when your record came out. We were a small company but were very professional. All of our records were great?