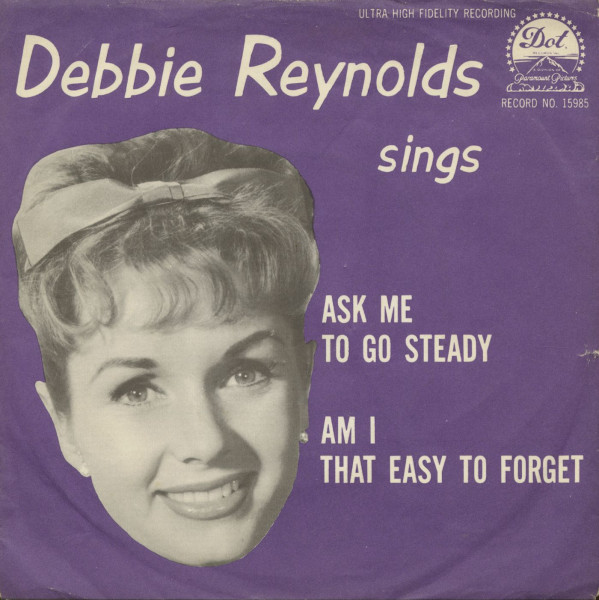 Please inform me as soon as the product is available again.
$11.87 *

Original 7inch 45rpm record from 1959 on 'Dot' by Debbie Reynolds

Article properties: Debbie Reynolds: Ask Me To Go Steady - Am I That Easy To Forget (7inch, 45rpm, PS)

Not only was Debbie Reynolds a splendid actress, she posted one of the biggest pop hits of 1957 with her innocent chart-topping ballad Tammy for Coral Records (it was the theme to her hit movie, ‘Tammy and the Bachelor’). Debbie grew up in El Paso, Texas before her family relocated to southern California when she was seven. Winning a Miss Burbank talent contest in 1948, the high schooler was signed to a movie contract by Warner Brothers.  Aba Daba Honeymoon, her 1950 duet with Carleton Carpenter for M-G-M from the film ‘Two Weeks with Love,’ was a smash.

Reynolds co-starred in the classic ’52 film musical ‘Singin’ in the Rain’ with Gene Kelly and followed it up with memorable roles in ‘The Affairs of Dobie Gillis’ (1953) and ‘The Tender Trap’ (1955). She cut the charming violin-enriched ballad Summer Romance for her 1960 Dot label album ‘Am I That Easy to Forget?.’ Debbie had a hit with the title cut, a country tune debuted in 1958 by its composer Carl Belew.