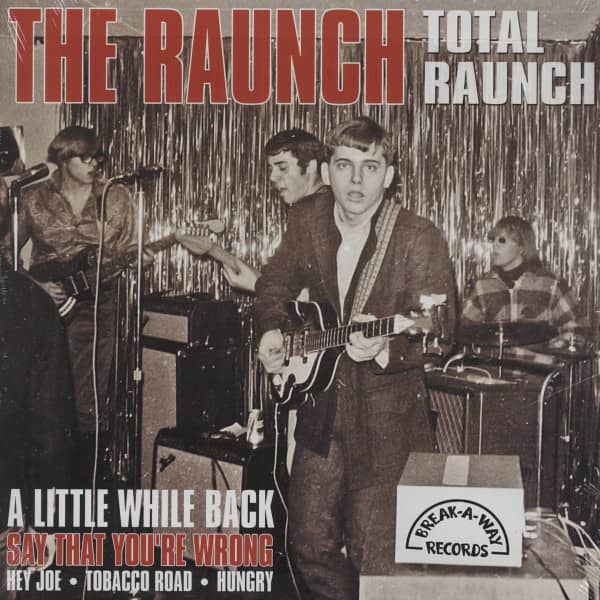 (2015/Break-A-Way) 5 tracks.
One sided mini LP.
The Raunch from Ossining, N.Y. were one of countless mid sixties groups born into a healthy local garage scene, living the classic story of local bands for two years and then almost forgotten for the last five decades. In the short time of their existence, the Raunch released a legendary 7”, made it with one track onto the collectable “Battle Of The Bands” LP on the regionally active Ren-Vell Label and in 1967 recorded another until now unreleased pair of tracks. Both sides of their sole single on Bazaar Records, are good examples of classic 60s garagepunk. “A Little While Back” is a crude heavy fuzz punker with a blistering guitar solo perfectly backed with “I Say You’re Wrong”, a tough ’n’ moody song with the classic garage girl-treats-boy-bad lyrics on the flip. While both sides of the 7” were group originals written by Sandy Katz, their LP contribution for Ren-Vell was a cover of Paul Revere & The Raiders’ “Hungry” - played by the group in their unique “raunchy style” of course. Even more unique is the treatment the boys gave to their unreleased recordings of “Hey Joe” and “Tobacco Road”. Again recorded at  Ren-Vell in 1967, both covers are unbelievable ultra heavy fuzz killers with a wild brand of slashing and uncompromising guitar playing. By all accounts, the studio engineer ran into the cellar to escape the loud, fuzzy noise! Despite losing several battle of the bands contests, their ultimate victory comes in the shape of this one-sided Break-A-Way release. Five tracks with the excitement and power for two LP sides, all of which are 60s savage Garage Punk and once heard, unforgettable