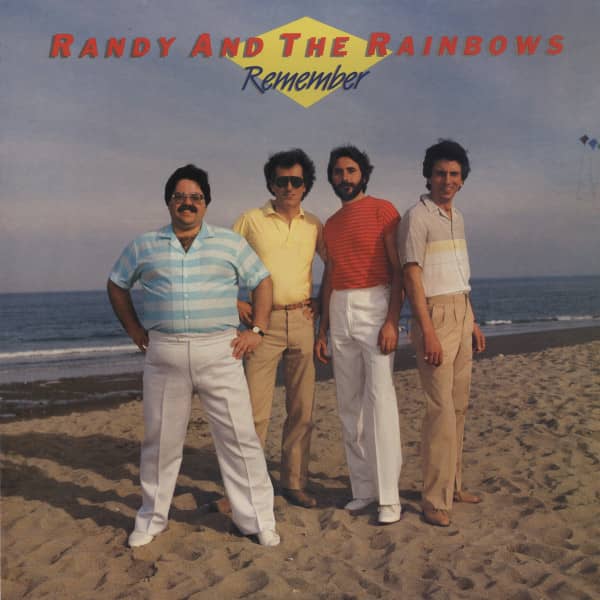 Please inform me as soon as the product is available again.
$18.70 *

O.K. trivia freaks, try this one: What group has been recording great records since 1959 . . . had their first hit 4 years later . . . is still recording and performing great music today . . . and all of their members are younger than any of the Rolling Stones?

As you might suspect (since you're holding their latest album in your hands) the answer is Randy and the Rainbows. Pioneers. Survivors. And just possibly the future of rock ‘n’ roll. Dom Safuto (“Randy”) was 12 years old when he and his brother Frank, as members of the Dialtones, recorded “Till I Heard It From You” for the legendary George Goldner. Dom remembers sitting in the waiting room of the recording studio with groups he idolized (the Flamingos, Little Anthony and the Imperials) waiting for their precious time “at bat.” At 12.

George Goldner treated Dom halfway between a son and a budding star. Rumor has it he felt that Dom could be a “white Frankie Lymon." He let Dom hang around sessions . . . listen . . . and absorb the sounds and the feelings of that golden era.

“Till I Heard It From You” got enough airplay, and sold enough records, to allow for another recording session. But before anything else could be released, the lead singer, Rosalie (the Safuto’s Brooklyn friend), decided that show business was not for her, and suddenly the Dialtones were no more. Goldner shelved the next Dialtones release. Under normal circumstances the story would have ended right there.

However, our undaunted heroes, Dom and Frank, regrouped with three other Maspeth neighbors (including Mike Zero of the current group) and after several name changes, in May of 1963, Randy and the Rainbows were burning up the national charts.

The good news for everybody who knew and loved “Denise” is that Randy and the Rainbows is essentially the same group today as they were when they recorded that landmark hit . . . not just in personnel (Vinny Carella joined almost immediately after “Denise” . . . there have been no personnel additions since 1964!) but in their sound, their spirit, and their energy.

This, their first “mini-LP,” is a no- filler affair . . . with the title track another possible rock &&, roll landmark. In rock &&, roll, as in life, there really is no substitute for experience. Hear for yourself. Check out the latest from the all-time-great Randy and the Rainbows! Ambient Engineer: Rob Bengston Recorded at The Workshoppe, Queens, NY Mastered by Joe Brescio, The Master Cutting Room, Manhattan, NY. This album was cut directly from the original 30ips stereo master tape for maximum sonic purity.

While growing up in Maspeth, Queens, New York, Dominick Safuto and his brother Frank became interested in music. Together with Eddie Scalia and a young woman named Rosalie Calindo, they formed a short-lived group called The Dialtones, and in 1960 had a small-scale hit on George Goldner's Goldisc label with "'Till I Heard It From You." They had landed this deal after they had recorded three demo songs, adding their rendition of The Marquis' "Bohemian Daddy" to their original compositions of "Til I Heard It From You" (sic) and "Johnny".

All three original demo recordings are included on this compact disc release for your enjoyment. Dom was 12 years old when he was sitting in the waiting room of the recording studio with groups he idolized (Flamingos, Imperials), waiting for their precious time "at bat". George Goldner treated Dom halfway between a son and a budding star. Rumor has it he felt that Dom could be a "white Franke Lyman". Goldner let Dom hang around sessions .. listen .. and absorb the sounds. "'Till" got enough airplay and sold enough records to allow for another recording session. But the lead singer, Rosalie, decided that show business was not for her and left - and Goldisc Records shelved the groups' second release

But the company thought "'Till I Heard It From You" had enough potential for a re-release just a year later with a new record number. Dominick soon became friendly with an old grade school acquaintance, Mike Zero. They were then attending Grover Cleveland High School (on the borderline between Brooklyn and Queens) and decided to start another group. Along with Mike's brother Sal and another friend, Ken Arcipowski, they dubbed themselves The Encores. With four members, the boys might have been satisfied, but they felt that their group was still missing something and set out to acquire a fifth singer. After a certain amount of difficulty in finding their last member, Dominick eventually persuaded his brother Frank to join, and the quintet was complete.

Now styling themselves Jr. and The Counts, they consisted of Dominick as lead, Frankie as first tenor, Sal as second tenor, Mike as baritone, and Kenny as bass. The group performed together initially for about six months, playing the familiar round of sweet sixteen parties, record hops, and church socials. Eventually, they acquired a manager, Fran Carrarie, and hopes for getting a recording contract were high. Fran was a good friend of songwriter Neil Levenson, and Levenson was impressed enough with the group's talent to introduce them to The Tokens, who signed them to their Bright Tunes firm.

The Tokens had been among the small number of white groups to have achieved success on a national scale, and they had branched out into the production end of the recording business. At this time they were working with Laurie Records, where they were producing The Chiffons. Laurie decided to place the group on their Rust subsidiary label, but only after insisting that they adopt another, more commercial name. Thus Jr. and the Counts became Randy (alias Dominick Safuto) and The Rainbows, and although the group disapproved at first, they bowed to the company's decision.

Within two weeks the new Randy and The Rainbows were in the studio recording two songs -"Denise" and "Come Back", both written by Neil Levenson - which were soon released as their first single on Rust in 1963. "Denise" took off immediately, moving up to the No 10 spot on the national charts and as high as No 2 locally, Just when it looked as if "Denise" was going to go all the way to the top in New York, it was edged out by The Angels* "My Boyfriend's Back." No. 1 or not, "Denise" was phenomenally successful for a first record by an unknown group, and it brought them no less than four appearances on Clay Cole's TV show as well as two with Jerry Blavat in Philadelphia.

What we may call the New York-Philadelphia axis was supreme in the popular music field of the early 60s, and the group's appeal in both cities was a measure of their accomplishment. They also went on tour across the country in the company of such artists as The Chiffons, Dionne Warwick and Bob B. 5oxx and The Blue Jeans. The tour was headlined and sponsored by The Four Seasons, whose lead singer, Frankie Valli was, ironically, once quoted as saying that "Denise" is a record that copies the style of The Four Seasons, Returning from the tour, Randy and The Rainbows also performed at the Brooklyn Fox Theater for Murray the K's Labor Day Rock A Roll Show of 1963 for 10 days.

The group's second release on Rust was disappointing in terms of commercial success. "She's My Angel" (with Trade Martin on guitar) was to have been the A side, but "Why Do Kids Grow Up" was pushed instead; it was not pushed quite hard enough, however, and the record quickly vanished from the air waves after making very little initial noise, probably due to President Kennedy's assassination.

It made it to No. 97 in December 1963. Three subsequent releases did no better. Although some of them - especially "Happy Teenager" and "Little Star" - were really quite good, none of them made the charts, and the group was finished at Laurie. Their last for Laurie was as updated "surf" type release with "Joyride" b/w "Little Hot Rod Suzie" in 1965. Only one track remained unreleased at Laurie with "Take It Like A Man" from 1964.

After their contract with Laurie expired in late 1965, Randy and The Rainbows moved over to Mike Records, a division of the Andover Record Corp. The label was owned by Eddie Matthews, whom the group had met while they were still at Laurie. Two releases on Mike,
"Lovely Lies" and "He's A Fugitive," were supervised by Tommy Kaye, who later helped to write "One Man Band", the big hit for Three Dog Night. The group's third and lost record for Mike Records was "Bonnie's Port Of Town" (written by Dickie Lee, of "Patches" fame),
which never got beyond the stage of being pressed as DJ copies.

After leaving Mike, Randy and The Rainbows returned late in 1966 to The Tokens, who had been responsible for all of the earlier Rust material. This new association resulted in a single release on the Tokens' own B.T Puppy label. The record, "I'll Be Seeing You" (backed with "Oh To Get Away," a "rush job" which was merely an old Tokens track overdubbed with Randy's voice) was no more successful then any of the group's latter efforts. This was, in fact, the last release for Randy and The Rainbows, a rather inauspicious end to a career that had begun with such promise.

The final break-up of the group was inevitable, but no more so than their recent revival. One of the group's first plans was to re-record "Denise," but they were beaten to the punch by Surprise, whose version on the Kare label became somewhat of a hit in the Midwest.
Nonetheless, they have formed a new association with Neil Levenson, who had originally written "Denise" for them.

Besides performing as Randy The Rainbows, the "new" group has formed a production company known as Rainbeaux Productions. Signed to the company is the group Madison Street, represented on Millenium Records with a song (scribed by Levenson) entitled
"Minstrel Man" in 1977 Madison Street consisted of brothers "Randy" Safuto and Frank Safuto together with Mike Zero, bass, and Vinny Carella, baritone. An album of their single releases followed on Crystal Ball Records in 1979, preceded by two old demos coupled as o 45 RPM in 1977 ("Angel Face" b/w "I Wonder Why" - acappella).

Younger listeners may be more familiar with Blondie's 1978 cover of "Denise" (as "Denis"), which was a hit for the established new wave group Blondie (featuring Debbie Harry), in the USA and all over Europe. It also led to a re-release of Randy & The Rainbows' version - in Great Britain on the Philips label, which held the right to the Laurie catalogue at that time.  Although Randy recorded an updated version in 1981 (after an older one from 1973), their greatest moments come when they toured extensively the oldies show circuit in the early 1980s, and were successful with two newly recorded albums for the Ambient Sound label (including some new Neil Levenson compositions) in 1982.

A self produced CD followed in 1993, presenting two new "modern" tracks with "Silver & Gold" and "Laura" to the public - with this group now consisting of Jimmy Bense, Vinny Carrella and Mike Zero, while the other formation had been hold together by Dom and Frank. The latter group released their last recording with "It's Christmas Once Again" in late 1993 on a Crystal Ball 45 RPM.
Until the late 1990s, either one or both groups were still active touring