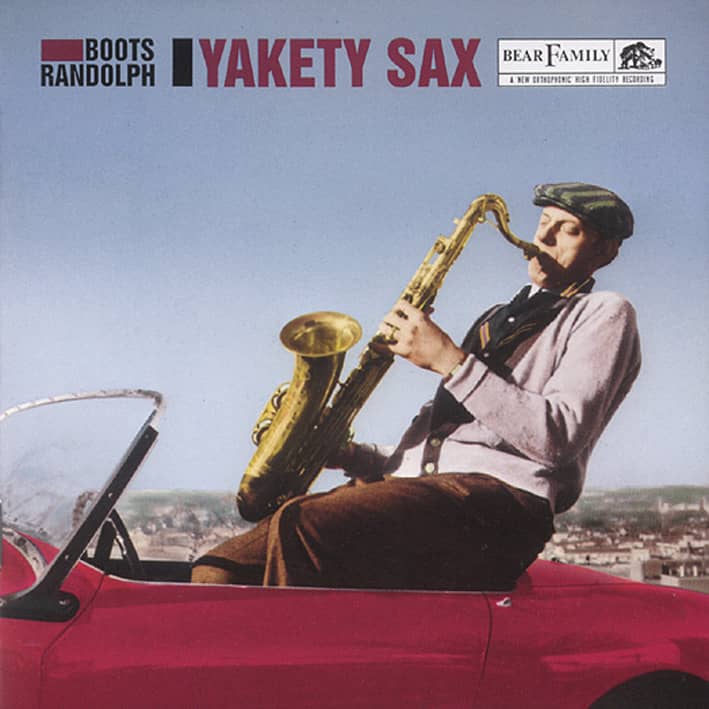 One of the all-time great Nashville session players, Homer 'Boots' Randolph died July 3, 2007 at Skyline Medical Center in Nashville. He was eighty years old. He is heard on literally hundreds of Bear Family releases and on our anthology of his solo work for RCA, 'Yakety Sax' (BCD 15459), featuring the original version of his greatest hit.

Starting in the late 1950s, Boots Randolph's prowess on the saxophone brought him to prominence as one of Nashville's elite A-Team. Earlier, the saxophone had no part in country arrangements, but with the emergence of the 'Nashville Sound,' he became a key player, and was featured on many Nashville-recorded hits like Brenda Lee's Rockin' Around The Christmas Tree and I'm Sorry; Elvis Presley's first post-Army release, 'Elvis Is Back!' (1960), notably on Reconsider Baby; and many of Roy Orbison's hits. For many years, he was on 200 or more recording sessions a year, and made dozens of solo albums. His name can be found on albums by artists as diverse as Dixieland trumpeter Al Hirt and REO Speedwagon.

Homer Louis Randolph III was born June 3, 1927, in Paducah, Kentucky, and finished high school in Evansville, Indiana. He said his brother called him 'Boots' to distinguish him from their father, also named Homer, but he could never explain why. He and his siblings won Depression-era talent shows at which food was the prize. "There were times when we didn't have much to eat, but we always had music,"  he said in 2002. "It was standard for us to come home from one of those [music] contests with the car loaded down with cans of corn and peas, boxes of macaroni, bacon, bread and so forth."  Toward the end of World War II, he played sax, trombone and vibraphone in an Army band, and moved through various bands until Kenneth Burns (half of Homer & Jethro) heard him play Chicken Reel on the sax and suggested to Chet Atkins that he should be on RCA. With guitarist James 'Spider' Rich, Randolph had written a version of what became Yakety Sax, itself inspired by King Curtis' playing on the Coasters' hit Yakety Yak. Atkins signed Boots Randolph in 1958, although the RCA solo recordings were not successful.

Meanwhile, Boots Randolph began carving out a career for himself in the studio, and recorded hillbilly jazz with a few like-minded session players. He appeared on RCA's 1960 jazz album 'After The Riot At Newport' with Chet Atkins, guitarist Hank Garland and pianist Floyd Cramer. But mostly, Boots Randolph worked in the studio. "They knew I was versatile with the different sounds, and I got to be the guy they would hire to put on the sessions, but sometimes I'd record only one song all night," he once said. In 1961, he left RCA to sign with Monument Records. The company issued a new version of Yakety Sax, and it stayed 35 weeks on the charts. Later, the British slapstick comedian Benny Hill made it his theme song, much to Randolph's delight. No other single came close to eclipsing Yakety Sax (although Chet Atkins later covered Yakety Sax as Yakety Axe and took it back to the charts).

As his session work declined along with his brief chart career, Boots Randolph became a personality on variety shows hosted by Johnny Carson, Ed Sullivan and Jackie Gleason as well as 'Hee Haw' and 'The Jimmy Dean Show.' In 1977, he opened 'Boots Randolph's', a 275-seat nightclub in Nashville's historic Printers Alley. The club became his home base for 17 years. He ended his career playing with trumpeter Danny Davis at the Stardust Theatre, across from the Opryland Hotel. "'Yakety Sax' will be my trademark,"  he told the Associated Press in 1990. "I'll hang my hat on it. It's kept me alive. Every sax player in the world has tried to play it. Some are good, some are awful."  Now that he's gone, anyone wanting to see him in action should track down a copy of the 1966 quickie flick 'That Tennessee Beat'.

Boots Randolph is survived by his wife of 59 years, Dee Baker Randolph of Whites Creek, Tennessee.