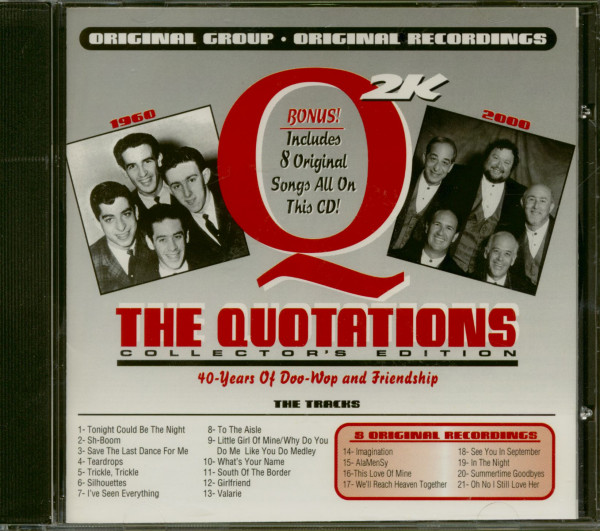 This article is deleted and can no longer be ordered!
Please inform me as soon as the product is available again.
P Secure bonuspoints now
Description Review 0
Description
(Q-2K) 21 tracks  - As i recall , it as raining the day we met Larry. Had it not been, the... more
Close menu

The Quotations: 40 Years Of Doo Wop And Friendship (CD)

(Q-2K) 21 tracks
-
As i recall, it as raining the day we met Larry. Had it not been, the Quotations probably wouldn't have come to be.
Instead of walking to the train station or up Kings Highway to the Rainbow Shop, we went to Barney's pool room. There, amidst the wonderful echo that tile walls create, Richie, Lew and I began the daily ritual of singing. We fumbled through bland, 3-part harmonies because we had no lead, and grimaced when the "clinkers" bounced off the walls. A short, bubbly guy filled with attitude and bravado sauntered up the steps and stopped to listen to our feeble attempts at harmony. Oct reper-toire was extremely boring, and limited by the lack of a proper lead, but all that was about to change dramatically.

The first time Larry opened up his mouth to sing his strong baritone yoke added power and depth to our sound. All of a sudden chords began to lock! Larry was definitely something special, and for the first time, smiling like idiots, four teenagers began to believe that maybe, just maybe, we might become something special too. Every street comer group dreams of having a hit record; we were one of the lucky few. With the release of Imagination in 1961, winning record of the night and then record of the week on Murray The K's Swinging Soiree, we began an exciting odyssey that took us around the country and created vivid memories that to this day, are as strong and alive as when we made them.

It's interesting that Imagination beat Dion's Wanderer as record of the week. but more interesting to speculate about what might have happened had we recorded on a label other than Verve. The Quotations were the first rock n' roll group to record on Verve, which was strictly a jazz abel until we came along. Would we have enjoyed a string of hits with another label? I believe so. As you listen to the songs we recorded back in the early 60, I think you'll agree we had a unique sound and talent for putting our own special spin on songs that were considered standards. The unique bass riffs and high tenor parts we came up with plus our creative back-rounds have always been our trademark.

This Love Of Mine was the follow-up to Imagination but it barely saw the light of day. I recall Larry dancing with a broom et Palisades Amusement Park when we did a promotion of the record with Cousin Brucie. I also recall smiling et Larry's antics and creative showmanship. See You In September came next, but unfortunately Verve released the record in August which pretty much destroyed any chance of air play. In The Night was our final recording and it had a unique musical hook . To this day I still think that Oh No I Still Love Her was the best song we recorded. With the disappointment that followed Verve's lack of promotion and non-existent understanding of Rock n Roll, the group splintered. Lew left and then I did, but the Quotations, in one form or another have been together over 40 years.

It's interesting to note that not one original member has ever sung In 1998, after a few reunions we came together one more time with a new member singing tenor. Richie had moved to bass and with the additon of Stu, a fresh sound was bom. This CD represents the culmination of lots of practice, plenty of live performaces and a renewed love of this magical, musical entity we call Doo-Wop. We've recorded some favorites of ours, included are some acapella and also the eight songs that we originally recorded 40 years ago. Some have never been heard before. If you enjoy listenting to this CD half as much as we enjoyed making it, then all the hard work and energy will have been worth it. We made the CD for us, but also as a gift to all of you who still remember the 60s and a Brooklyn group called The Quotations.

Review 0
Read, write and discuss reviews... more
Close menu
Customer evaluation for "40 Years Of Doo Wop And Friendship (CD)"
Write an evaluation
Evaluations will be activated after verification.
Weitere Artikel von The Quotations
The Quotations: This Love Of Mine b-w See You In September... Art-Nr.: 45COL4898