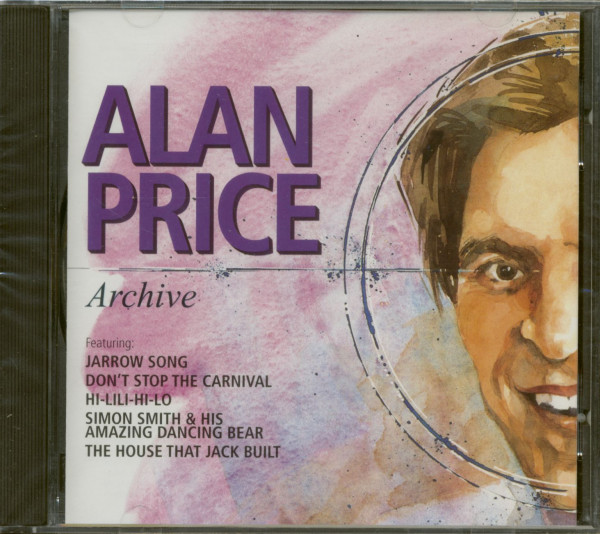 Learn more about Alan Price
Alan Price Used To Be An Animal But I'm All Right Now' was the title of an autobiography by... more
Close menu
"Alan Price"

Used To Be An Animal But I'm All Right Now' was the title of an autobiography by Eric Burdon, singer with the hellraising Newcastle-based R&B group with which Alan Price first made his name. But while Burdon's post-Animals career was a turbulent rollercoaster ride, singer/keyboardist Price - who'd bailed out for a solo career long before the rot set in - enjoyed the most performing success of all his former bandmates.
Indeed, long before Burdon arrived to add his Animal magnetism, Price had been working the North-East club circuit with guitarist Hilton Valentine as the Black Diamonds and, later, the Alan Price Combo. Bassist Chas Chandler (later Jimi Hendrix's mentor and manager) and drummer John Steel then joined them, the name changing when former Pagans frontman Burdon completed the package. But the Animals' strength was in having, effectively, two frontmen. It was Alan Price whose stunning, organ-based rearrangement of the traditional 'House Of The Rising Sun' gave the group a transatlantic Number 1 in 1964, selling a quarter of a million in Britain in the first week alone. But Stateside success meant flying, and Price, apparently an unhappy aviator, quit in May 1965, just before a nine-day tour of Sweden. "My nerve broke just a few hours before we were due to fly", he told New Musical Express at the time.

While this was ultimately to have unfortunate consequences for the Animals, in whom Price had proved the perfect foil for Burdon's extrovert behaviour, it opened an exciting new chapter for Alan himself. Aside from keeping both feet firmly on the ground, he had another, pressing reason to succeed. "After 15 months," he commented, "I'd had three tours of America, four hit singles and two hit albums and I hadn't seen much money, so I thought it was time to leave." Dave Rowberry from the Mike Cotton Sound was recruited as Alan's replacement. After a cameo appearance in Bob Dylan's documentary film 'Don't Look Back' he formed the Alan Price Set which included trumpeter John Walters (a future BBC Radio 1 producer and presenter) in the brass section alongside saxophonist Clive Burrows and Steve Gregory. Bassist Rod 'Boots' Slade and drummer 'Little' Roy Mills made up the numbers.

The sound of the guitar-less sextet was moving away from Animals-style rock and altogether closer to the jazzy R&B sound his future performing partner Georgie Fame had been purveying in hip London clubs like th Flamingo. Yet to prove there were no hard feelings, the writer of sleeve notes for 1966's excellent 'The rice To Pay' album was....Eric Burdon! The Set continued until 1968, and while their albums contained their fair share of blues-influenced material, single releases became noticeably more commercial after an initial flop with 'Any Day Now'. Their six remarkably varied hits on Decca included Screamin' Jay Hawkins' 1957-vintage 'I ' ' Put A Spell On You' (also a minor US hit), the Price-penned 'The House That Jack Built', American jazzman Sonny Rollins' calypso-flavoured 'Don't Stop The Carnival', a revival of the Fifties show standard 'Hi Lilli Hi Lo' (from the musical Lilli), Shame' and Simon Smith And His Amazing Dancing Bear' The latter, by Randy Newman, gave that talented songwriter an early British showcase - not that Alan Price had to rely on outside songwriting talents. His score for Lindsay Anderson's acclaimed 1973 film '0 Lucky Man' won him a BAFTA award, and also saw him nominated for an Oscar. A link with Georgie Fame in 1971, originally forged for one of an increasing number of TV appearances, led to a brief recording and performing double act, Fame and Price Together. However it was Price's 1974 solo long-player 'Between Today And Yesterday', his second for new label Warner Brothers, that took him into the album Top 10 and signalled his rebirth as a recording artist. 'Jarrow Song' was a respectful celebration of the North-East's working-class heritage, set, as ever, to a memorable melody.

'Baby Of Mine' and the excellent 'Just For You' were lesser hits on the Jet label later in the decade, while accomplished albums like 'Metropolitan Man', 'Performing Price' and 'Shouts Across The Street' were also well received. Alan was much in demand as a composer of TV themes, turning out tunes for 'Fame Is The Spur', 'World's End' and 'The Further Adventures Of Lucky Jim'. Returning to the big screen, he also wrote the soundtracks for two major films, 'Britannia Hospital' and 'Plague Dogs', both in 1982. Still happy domiciled in the South (the Animals had moved down at the time of their first hit), he played a charity concert at the Albert Hall with the London Philharmonic Orchestra and off-stage somehow found time to become a director of Fulham Football Club. He also ventured into the world of musicals, writing and co-starring in the stage production of Andy Capp with Tom Courtney. The Animals briefly got back together for live, and later studio purposes in 1968, 1977 and 1983, but none of these reunions could be sustained. Eric Burdon claimed it was because there were 'four leaders in the band', but as the only ex-Animal to prove himself as a solo artist, Price clearly had no need to retread the past, however illustrious it might be.

Alan Price first came to the keyboard when, at the age of 11, an illness kept him off school for almost a year and he busied himself at his grandmother's piano. Since then, his progress from Animal to all-round entertainer has been both eventful and entertaining. As a composer," said the New Musical Express, "his primary assets are his intelligence, directness and disinclination towards overreaching what he can do convincingly. An enduring talent." The 18 tracks showcased here more than back up that assessment. He used to be an Animal - but musical evidence confirms that there's much more to the Alan Price story than that... MICHAEL HEATLEY