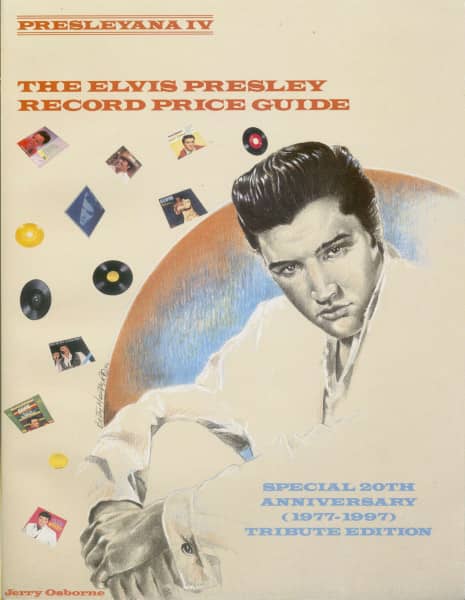 INTRODUCTION
Hello T-r-o-u-b-l-e
Roughly one year before the pages of this book were due at the printer, we knew we were in trouble. Due to some bizarre scheduling on the part of three different publishers, we committed to produce nine — yes, nine — books in one year, from July 1996 to August '97. Presleyana is one of the titles caught up in that conglomeration. Fortunately, knowing so many Elvis dealers, it was also one of the two books we could get some editing help with. (Movie/TV Soundtracks & Original Casts being the other.) Having a good knowledge of recent sales and current trends were requirements, not to mention being willing and able to devote several months to the project. When discussing the task with Bob and Carbl Alaniz, of Soundz Good Records, it became clear we found a match.

Bob, along with a separate team of advisors he recruited, began by wading through the existing data base, updating prices and adding listings as needed. He also poured through all of the mail from readers, making corrections and absorbing suggestions. When Bob and Co. finished phase one, the files were returned to us in Washington for further fine-tuning and all the finishing touches. Without the help of Bob and Carol, and friends, it is doubtful this guide could have been completed in time for the 20th Anniversary events and the annual August extravaganza in Memphis: International Elvis Tribute Week. But they TCB'ed —they took care of business. Thanks for a job well done.

For those who may have missed the previous edition of this guide, Presleyana Ill, it was there that we introduced the two most consequential modifications in Elvis price guide history: separate pricing for all the pieces that make up a "package," and precise individual identification of pressings. By way of review: There may be 30 or so different pressings made of an album during a period with only three different label designs in use. Our introduction of separate identification of the minor as well as the major variations enables one to accurately match a disc and its appropriate, or original, cover — along with any germane insert, inner sleeve, bonus, or sticker. Lacking this information, one could not easily distinguish whether a cover for a black label dog on top Blue Hawaii is really one from 1961, or one that came with a 1973 orange label reissue. Despite the extensive research involved in preparing the information for Presleyana III, and the many additions and corrections made since that book came out (in 1992), there are still some releases that have yet to be validated. Each of these mavericks is marked "Verification Pending." Any input as to what makes these covers different from previous ones would be appreciated and will be incorporated in future editions. One of the most revealing aspects of cover appraising occurs when the exact same jacket is used on later issues. Whether RCA
3
reprinted from earlier cover slick artwork, or simply continued using covers from an earlier printing, the effect still creates a lower price on the original printing than usual. To indicate this anomaly, something along the lines of: "Price reflects RCA's continued use of this same cover, with no discernible differences" will appear. This should make it possible for you to know whether a cover for a late '60s issue is identical to ones used in the early '60s, or if an early '60s disc is in fact in a late '60s cover. As with every new Presley guide we do, label and cover descriptions have once again been expanded. To merely identify a cover as having the catalog number at the upper right, or lower left, as in earlier guides, doesn't begin to adequately describe and differentiate cover variations. As to the separate pricing for each part, the feedback we have received is that, while it takes some getting used to, it is truly the only sensible approach — especially when it comes to Elvis Presley collectibles. Only then can the difference between packages where the bulk of the value is in the cover, such as the Chicken of the Sea Aloha from Hawaii Via Satellite or International Hotel box sets, be sorted out from those where the greater value is in the disc, such as Elvis (LPM-I382) with the alternate take of Old Shep. Separate pricing appears in all three sections of the guide, although only in the EP and LP chapters are grand totals given for complete packages. Adding up all of the parts of a package for you will eliminate your having to total the appropriate numbers.

Do not, however, automatically use the total package price if any of the significant parts are missing. For singles, where the individual parts are pretty much limited to a disc and a picture sleeve, the totals are quite easy to figure. Whenever possible, we provide recording serial numbers. Having these serial — or identification — numbers in hand, it is not necessary to play the record to know if it is the 35 rpm single of He Touched Me, or It's Now Or Never without the piano track, or Elvis: A Legendary Performer, Vol. 2 without the false starts and outtakes. Each of these oddities has a take number unique unto itself. RCA's production procedure becomes clearer all the time and makes it easier for us to understand how many of their manufacturing errors came to be, as well as why so many corrections are found on their stampings. New in this edition is a supplement to our record manufacturing chapter. By William Brown, this essay digs even deeper into RCA's pressing plants, label makers, and identification coding.

How the Prices Are Determined
Apart from the information supplied by this edition's editor, Bob Alaniz, many of the world's most active dealers and collectors of Presleyana also reviewed the listings, making corrections to existing data, adding new material, and, of course updating prices...

(January 8, 1935, Tupelo, MS – August 16, 1977, Memphis, TN)
Elvis Presley (full name Elvis Aaron Presley) is the most outstanding personality in showbiz ever since, and the most popular entertainer the world has ever seen! His musical influence within music history and its following generations of musicians is still unbroken. His huge 'Blast-Off' in the mid-1950s, the rising star from a simply called 'Hillbilly Cat' (at Sun Records) to a lascivious Rock'n'Roll singer with charisma, a male sex symbol (then at RCA Victor) soon popularized him as "The King of Rock'n'Roll" or simply "The King".
His first cut within his tremendous career happened between October 1958 and March 1960 while Elvis was on duty with the U.S. Army and stationed in Germany. It was there in 1959 when he met his later wife Priscilla Beaulieu at age 14. Elvis and Priscilla married on May 1, 1967 in Las Vegas (divorce in 1973). Elvis evolved into an all-around entertainer after his Army service and started starring in Hollywood films. 33 movies in total, including the two concert documentaries 'That's The Way It Is' and 'On Tour'. He again shook the world with his 1968 NBC Comeback TV Special after his movie period without any stage appearances.
This TV special included the first ever unplugged session presented together with musicians from the early days such as Scotty Moore and D.J. Fontana. 1973 saw THE TV mega event at all: Elvis Presley, 'Aloha From Hawaii via Satellite'! Elvis' Honolulu appearance, the first time that a show was broadcasted worldwide via satellite! He was ahead of his time! Elvis Presley had 148 US single chart hits, including some so-called double-sider when A- and B-side both hit the charts like his 1956 smash 'Don't Be Cruel b/w Hound Dog', plus 15 EP hits between 1956 and 1977. Two billion of sold media and sound carriers by Elvis Presley is the estimated number! He received 14 Grammy nominations until 1978 and three Grammy for his Gospel interpretations. Elvis was the youngest artist when honored with the Bing Crosby Award (Lifetime Achivement Award) in 1971.
He is presented in 5 Halls of Fame (Rock'n'Roll, Rockabilly, Country, Blues and Gospel). Six of his song interpretations are collected in the Grammy Hall of Fame. On top of it all Elvis Presley got the most gold and platinum records and a Diamond-Award. He definetly is the 'Best selling solo artist in U.S. History' (RIAA – Record Industry Association of America)! Elvis Presley CD albums, vinyl records as LPs or singles at 45rpm - Bear Family offers a huge number of various Elvis Presley CDs, vinyl-LPs and 45rpm singles, vinyl- and CD box sets, books and mags, DVDs, unique and extraordinairy memorabilia! Let's say it in the words of one of Elvis sixties album title: There is "Something For Everybody"! And hey, you name it! Elvis Presley is the King of Rock'n'Roll, the biggest icon in showbusiness, and a great person who lives on forever!
Bear Family Records treats his legacy with the most respect and an optimum capacity of expert knowledge.
Review 0
Read, write and discuss reviews... more
Close menu
Customer evaluation for "Presleyana IV - The Elvis Presley Record Price Guide"
Write an evaluation
Evaluations will be activated after verification.
Weitere Artikel von Elvis Presley
Elvis Presley: American Sound 1969 (5-CD) Art-Nr.: CD975140