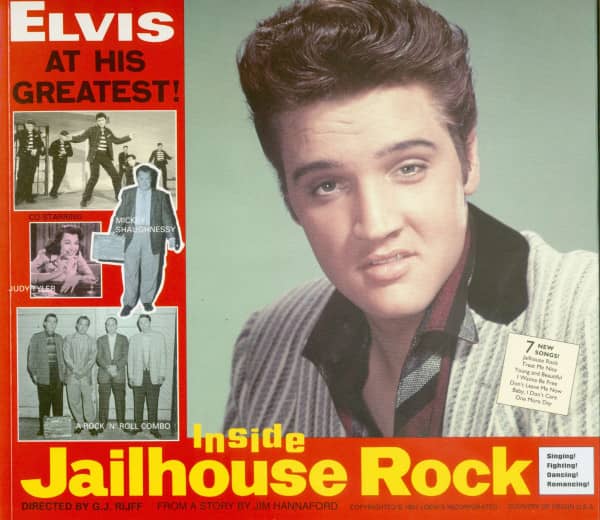 This article is deleted and can no longer be ordered!
Please inform me as soon as the product is available again.
P Secure bonuspoints now
Description
Learn more about Elvis Presley
Review 0
Description
110 pages/Seiten, 23x25 cm, Paperback: Among the flood of over and over recycled Elvis... more
Close menu

Among the flood of over and over recycled Elvis Presley material, this book really stands out as brilliantly edited, informative and full of unpublished pictures. It roughly shows the story the making of the movie 'JAILHOUSE ROCK' with excerpts from the script on-scene and off-scene b&w photographs and some rare information on what happened on the set. This, dear and exploited Elvis fan, is really worth your money. In der Flut von Fotobänden über das Leben von Elvis steht dieses Buch wie ein Fels in der Brandung:

FOREWORD: By Jim Hannaford
Several years ago my Memphis sidekick, Delbert Rhodes, and I picked up a treasure of material from the 'Jailhouse Rock' movie, from a couple of inside sources from that era in Elvis's life, one living in Nashville and the other in San Diego. That sparked the idea of producing a book on the classic 1957 movie and laid the groundwork for this project. Today, 'Jailhouse Rock' is as popular as ever; and, having been colourised by Ted Turner's world-famous company, is now avail-able on both video and laser disc, still looking and sounding like one of the greatest rock movies of all time. The year 1992 marked its 35th anniversary. It was also the year BMG fittingly chose to release its boxed set, 'Elvis The King of Rock and Roll The Definitive '50s Masters'. In preparing this book I decided that in-depth interviews with the principals was out of the question for a number of reasons: so many of them - the cast or the people at MGM - are no longer alive, and those who are probably have clouded memories of the film. Also I worried that some of the stories given to me by the so-called 'Memphis Mafia' were probably tainted by the ageing pro-cess and had been added to as the years went on.

One individual actually wanted a piece of the action of the book, and as I knew this wasn't going to be a best seller, I squashed that idea. Sadly some of the people from the former Presley circle seem to think they are stars in their own right now! One day, however, I received a letter from Dutch fan, author, designer, and superb artist, Ger Rijff, who had read my stories about 'Jailhouse Rock' in 'Discoveries' magazine and offered his help on the book project. The result of this is a collaboration of Ger Rijff's stunning artwork and the textual material - photo-graphs and other memorabilia from the Jim Hannaford/Delbert Rhodes collection.

We would also wish to thank Howard Banney in New York, Glen Johnson in Canada, Marie Fletcher in Oklahoma City, as well as our insider at MGM and contact in Madison-Nashville. In the following pages we have included literally hundreds of unseen stills footage, many of them showing different camera angles from those normally seen, as well as shots from parts of the movie which were deleted, all the work of stills photographer, Ken Bell; press book material, publicity material, and actual MGM docu-ments and letters. Of tremendous interest to collectors are some of the pages of dialogue, with notations made in pencil by Grace Dubray. Using Marie Fletcher's press clippings from the period, we have attempted an overview of some of the stories/rumours circu-lating during the filming, taking a look at the recording session for the film, and generally discussed what was going on at the time.

A time when all was, indeed, cool, and Young Elvis ruled Hollywood!

(January 8, 1935, Tupelo, MS – August 16, 1977, Memphis, TN)
Elvis Presley (full name Elvis Aaron Presley) is the most outstanding personality in showbiz ever since, and the most popular entertainer the world has ever seen! His musical influence within music history and its following generations of musicians is still unbroken. His huge 'Blast-Off' in the mid-1950s, the rising star from a simply called 'Hillbilly Cat' (at Sun Records) to a lascivious Rock'n'Roll singer with charisma, a male sex symbol (then at RCA Victor) soon popularized him as "The King of Rock'n'Roll" or simply "The King".
His first cut within his tremendous career happened between October 1958 and March 1960 while Elvis was on duty with the U.S. Army and stationed in Germany. It was there in 1959 when he met his later wife Priscilla Beaulieu at age 14. Elvis and Priscilla married on May 1, 1967 in Las Vegas (divorce in 1973). Elvis evolved into an all-around entertainer after his Army service and started starring in Hollywood films. 33 movies in total, including the two concert documentaries 'That's The Way It Is' and 'On Tour'. He again shook the world with his 1968 NBC Comeback TV Special after his movie period without any stage appearances.
This TV special included the first ever unplugged session presented together with musicians from the early days such as Scotty Moore and D.J. Fontana. 1973 saw THE TV mega event at all: Elvis Presley, 'Aloha From Hawaii via Satellite'! Elvis' Honolulu appearance, the first time that a show was broadcasted worldwide via satellite! He was ahead of his time! Elvis Presley had 148 US single chart hits, including some so-called double-sider when A- and B-side both hit the charts like his 1956 smash 'Don't Be Cruel b/w Hound Dog', plus 15 EP hits between 1956 and 1977. Two billion of sold media and sound carriers by Elvis Presley is the estimated number! He received 14 Grammy nominations until 1978 and three Grammy for his Gospel interpretations. Elvis was the youngest artist when honored with the Bing Crosby Award (Lifetime Achivement Award) in 1971.
He is presented in 5 Halls of Fame (Rock'n'Roll, Rockabilly, Country, Blues and Gospel). Six of his song interpretations are collected in the Grammy Hall of Fame. On top of it all Elvis Presley got the most gold and platinum records and a Diamond-Award. He definetly is the 'Best selling solo artist in U.S. History' (RIAA – Record Industry Association of America)! Elvis Presley CD albums, vinyl records as LPs or singles at 45rpm - Bear Family offers a huge number of various Elvis Presley CDs, vinyl-LPs and 45rpm singles, vinyl- and CD box sets, books and mags, DVDs, unique and extraordinairy memorabilia! Let's say it in the words of one of Elvis sixties album title: There is "Something For Everybody"! And hey, you name it! Elvis Presley is the King of Rock'n'Roll, the biggest icon in showbusiness, and a great person who lives on forever!
Bear Family Records treats his legacy with the most respect and an optimum capacity of expert knowledge.
Review 0
Read, write and discuss reviews... more
Close menu
Customer evaluation for "Inside Jailhouse Rock"
Write an evaluation
Evaluations will be activated after verification.
Weitere Artikel von Elvis Presley
Elvis Presley: Elvis Ten Years After by Anne E Nixon (Hardback) Art-Nr.: 0016051