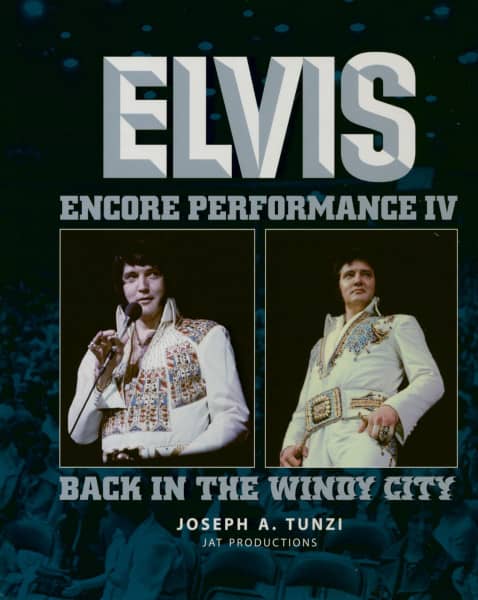 Elvis Presley: Encore Performance IV - Back In The Windy City

A fantastic book and a real fan favorite! Out of print now!*****

Elvis Presley’s connection to Chicago can be measured in two ways. First, we can name the number of people he associated with who had Chicago roots. This group ' includes friend and road manager Joe Esposito,  Colonel Parker’s right-hand man Tom Diskin, and  famed "Elvis has left the building”announcer Al Dvorin. Certainly this is interesting trivia, but- the most substantial Chicago/Presley correlation can be found  by re?ecting on the impact Elvis and music made on the city. Certainly one of his most loyal fans was Ral Donner. In the early sixties Donner scored a number of hits with a string of credible Presley sound-a-like records.  He narrated the docudrama This Is Elvis in 1981, and continued to perform until his death in 1984.

The influence of Elvis on Chicago is further demonstrated by the existence of JAT Publishing itself. Since its inception in 1988, JAT Publishing has been proudly based in Chicago. Over the last twenty-three years, a main objective of the company was to make good use of our locale by thoroughly chronicling Elvis' visits to the region. In 1990, Joseph A. Tunzi based his first photo journal, Elvis, Encore Performance, around Elvis’1972 appearances here. In 1999 Mr. Tunzi assembled a follow-up to the book: Elvis, Encore Performance III, Back To Chicago 1977. This entry in the JAT canon mainly represented Elvis’ May 1, 1977 concert, but it also delved back into Elvis’ entire career. Of note were beautiful images from Elvis’ Chicago outings in 1972 and 1976. Over the years other Chicago photographs have been utilized wherever appropriate, perhaps the most stunning image appearing in Elvis:America The Beautiful. There we see a 1976 color candid of Elvis looking relaxed and fit at the Arlington Park Hilton in Arlington Heights.

The video division of JAT has also chronicled  Elvis’ Chicago jaunts in the Hot Shots & Cool Clips  DVD series. Footage of Elvis at the International Amphitheater on March 28, 1957 graced volumes 1  and 3, while Elvis’ June 16 and 17 evening performances at The Chicago Stadium in 1972 were featured in stunning quality on volume 2. Not having a TV crew  or lights to inhibit him, these segments are more  raw and natural than what can be glimpsed in a  more professional setting.  Surviving audio and visual elements, as well as contemporary reportage, allow us the chance to  impart the facts about every Chicago gig Elvis performed. In this book we bring together all of the various sources in the JAT archive to bring you the  definitive look at Elvis’ time spent in the Windy City."

(January 8, 1935, Tupelo, MS – August 16, 1977, Memphis, TN)
Elvis Presley (full name Elvis Aaron Presley) is the most outstanding personality in showbiz ever since, and the most popular entertainer the world has ever seen! His musical influence within music history and its following generations of musicians is still unbroken. His huge 'Blast-Off' in the mid-1950s, the rising star from a simply called 'Hillbilly Cat' (at Sun Records) to a lascivious Rock'n'Roll singer with charisma, a male sex symbol (then at RCA Victor) soon popularized him as "The King of Rock'n'Roll" or simply "The King".
His first cut within his tremendous career happened between October 1958 and March 1960 while Elvis was on duty with the U.S. Army and stationed in Germany. It was there in 1959 when he met his later wife Priscilla Beaulieu at age 14. Elvis and Priscilla married on May 1, 1967 in Las Vegas (divorce in 1973). Elvis evolved into an all-around entertainer after his Army service and started starring in Hollywood films. 33 movies in total, including the two concert documentaries 'That's The Way It Is' and 'On Tour'. He again shook the world with his 1968 NBC Comeback TV Special after his movie period without any stage appearances.
This TV special included the first ever unplugged session presented together with musicians from the early days such as Scotty Moore and D.J. Fontana. 1973 saw THE TV mega event at all: Elvis Presley, 'Aloha From Hawaii via Satellite'! Elvis' Honolulu appearance, the first time that a show was broadcasted worldwide via satellite! He was ahead of his time! Elvis Presley had 148 US single chart hits, including some so-called double-sider when A- and B-side both hit the charts like his 1956 smash 'Don't Be Cruel b/w Hound Dog', plus 15 EP hits between 1956 and 1977. Two billion of sold media and sound carriers by Elvis Presley is the estimated number! He received 14 Grammy nominations until 1978 and three Grammy for his Gospel interpretations. Elvis was the youngest artist when honored with the Bing Crosby Award (Lifetime Achivement Award) in 1971.
He is presented in 5 Halls of Fame (Rock'n'Roll, Rockabilly, Country, Blues and Gospel). Six of his song interpretations are collected in the Grammy Hall of Fame. On top of it all Elvis Presley got the most gold and platinum records and a Diamond-Award. He definetly is the 'Best selling solo artist in U.S. History' (RIAA – Record Industry Association of America)! Elvis Presley CD albums, vinyl records as LPs or singles at 45rpm - Bear Family offers a huge number of various Elvis Presley CDs, vinyl-LPs and 45rpm singles, vinyl- and CD box sets, books and mags, DVDs, unique and extraordinairy memorabilia! Let's say it in the words of one of Elvis sixties album title: There is "Something For Everybody"! And hey, you name it! Elvis Presley is the King of Rock'n'Roll, the biggest icon in showbusiness, and a great person who lives on forever!
Bear Family Records treats his legacy with the most respect and an optimum capacity of expert knowledge.
Review 0
Read, write and discuss reviews... more
Close menu
Customer evaluation for "Encore Performance IV - Back In The Windy City"
Write an evaluation
Evaluations will be activated after verification.
Weitere Artikel von Elvis Presley
Hint!
Elvis Presley: The Something For Everybody Sessions (4-CD) Art-Nr.: CD975150