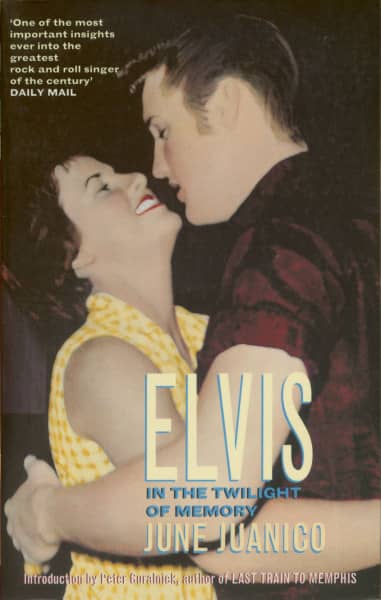 This article is deleted and can no longer be ordered!
Please inform me as soon as the product is available again.
P Secure bonuspoints now
Description
Learn more about Elvis Presley
Review 0
Description
Taschenbuch - 322 Seiten - Englisch A touching portrait of the times [and] smalltown '50s... more
Close menu

Elvis Presley: Elvis In The Twilight Of Memory by June Juanico

A touching portrait of the times [and] smalltown '50s America ... Read it and weep' TIME OUT
`Frank and full of life ... In its most vivid, rough-housing passages, June Juanico's book succeeds because it need not be about Elvis Presley at all' GREIL MARCUS in THE TIMES
`Marvellous ... It gives a clearer, closer picture of the period than anything yet published ... Everything about this book is a joy. It's frank, funny and affectionate' MOJO

It began in 1955, when the teenage June Juanico was persuaded by a friend to go and see an up-and-coming young singer perform in Biloxi, Mississippi. The singer was Elvis Presley, the venue a makeshift dance-hall like the dozens of others across the deep South where Elvis would make his name. June soon caught his eye, but after one wonderful evening together a combination of bad luck and the demands of Elvis's touring conspired to keep them apart until May 1956, when they met up again. It was the start of an idyllic summer together, during which June fell in love, toured with Elvis in Florida and had to come to terms with dating the hottest property around.

With an Introduction by Presley's acclaimed biographer, Peter Guralnick, and featuring many previously unpublished photographs, ELVIS: IN THE TWILIGHT OF MEMORY is June Juanico's own account of that magical time. A bitter-sweet love story moulded by innocence and the demands of fame, June's wonderfully fresh memoir provides a fascinating new insight into the genesis of the man who would be King.

When a friend of seventeen-year-old June Juanico invited her along to a concert by a popular young singer, she hesitated, but finally went. The singer, of course, was Elvis Presley, and when his eye caught June's, they both got all shook up. So began the most significant of his early relation-ships - a summer idyll of romance and playful fun that was to be a last stop innocence on the path to self-destruction.
In this clear-eyed, loving, and tender memoir, June gives us Elvis on the verge of mega-stardom, still a country kid with polite manners, a voice that melted hearts, and more sex appeal than anyone could handle. June describes her closeness to Elvis's mother, Gladys, who had hoped June and Elvis would marry, and her rivalry Colonel Parker, Elvis's handler, who believed marriage would end his protege's career. And then there the thousands of screaming fans, doing anything they could get a piece of the King.

In the end the self-prossessed June knew that however much Elvis loved her, he was on a track no one could stop and would never be in control of his life; she made up her mind to move on and not look back. Not until now. Featuring twenty- three previously unpublished photographs of Elvis and an introduction by Elvis biographer Peter Guralnick, this fresh and completely disarming memoir give us an American icon as few would know him, in a time and place bathed in the light of remembered love.

Article properties: Elvis Presley: Elvis In The Twilight Of Memory by June Juanico

(January 8, 1935, Tupelo, MS – August 16, 1977, Memphis, TN)
Elvis Presley (full name Elvis Aaron Presley) is the most outstanding personality in showbiz ever since, and the most popular entertainer the world has ever seen! His musical influence within music history and its following generations of musicians is still unbroken. His huge 'Blast-Off' in the mid-1950s, the rising star from a simply called 'Hillbilly Cat' (at Sun Records) to a lascivious Rock'n'Roll singer with charisma, a male sex symbol (then at RCA Victor) soon popularized him as "The King of Rock'n'Roll" or simply "The King".
His first cut within his tremendous career happened between October 1958 and March 1960 while Elvis was on duty with the U.S. Army and stationed in Germany. It was there in 1959 when he met his later wife Priscilla Beaulieu at age 14. Elvis and Priscilla married on May 1, 1967 in Las Vegas (divorce in 1973). Elvis evolved into an all-around entertainer after his Army service and started starring in Hollywood films. 33 movies in total, including the two concert documentaries 'That's The Way It Is' and 'On Tour'. He again shook the world with his 1968 NBC Comeback TV Special after his movie period without any stage appearances.
This TV special included the first ever unplugged session presented together with musicians from the early days such as Scotty Moore and D.J. Fontana. 1973 saw THE TV mega event at all: Elvis Presley, 'Aloha From Hawaii via Satellite'! Elvis' Honolulu appearance, the first time that a show was broadcasted worldwide via satellite! He was ahead of his time! Elvis Presley had 148 US single chart hits, including some so-called double-sider when A- and B-side both hit the charts like his 1956 smash 'Don't Be Cruel b/w Hound Dog', plus 15 EP hits between 1956 and 1977. Two billion of sold media and sound carriers by Elvis Presley is the estimated number! He received 14 Grammy nominations until 1978 and three Grammy for his Gospel interpretations. Elvis was the youngest artist when honored with the Bing Crosby Award (Lifetime Achivement Award) in 1971.
He is presented in 5 Halls of Fame (Rock'n'Roll, Rockabilly, Country, Blues and Gospel). Six of his song interpretations are collected in the Grammy Hall of Fame. On top of it all Elvis Presley got the most gold and platinum records and a Diamond-Award. He definetly is the 'Best selling solo artist in U.S. History' (RIAA – Record Industry Association of America)! Elvis Presley CD albums, vinyl records as LPs or singles at 45rpm - Bear Family offers a huge number of various Elvis Presley CDs, vinyl-LPs and 45rpm singles, vinyl- and CD box sets, books and mags, DVDs, unique and extraordinairy memorabilia! Let's say it in the words of one of Elvis sixties album title: There is "Something For Everybody"! And hey, you name it! Elvis Presley is the King of Rock'n'Roll, the biggest icon in showbusiness, and a great person who lives on forever!
Bear Family Records treats his legacy with the most respect and an optimum capacity of expert knowledge.
Review 0
Read, write and discuss reviews... more
Close menu
Customer evaluation for "Elvis In The Twilight Of Memory by June Juanico"
Write an evaluation
Evaluations will be activated after verification.
Weitere Artikel von Elvis Presley
Elvis Presley: American Sound 1969 (5-CD) Art-Nr.: CD975140