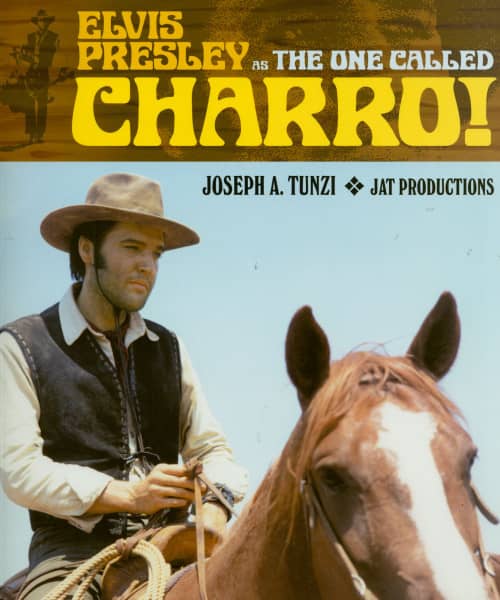 
The Making of CHARRO! and Selected Interviews
By Bill Bram

Filming for Charro! commenced on July 22 and was completed on August 28, 1968. Exteriors were shot at the Apacheland Movie Ranch1 in Apache Junction, AZ. Interior sequences, such as the sheriff's office, the saloon and bedroom scenes, were filmed at what was then known as United Artists Studios.2 This was the third and last film Elvis would do at this Hollywood studio. The other two films he shot here were: Kid Galahad and Frankie and Johnny.
While in Arizona the cast and crew stayed at the Superstition Inn. Elvis, his father Vemon, and the rest of his cronies stayed on the second floor. Colonel Parker, stayed in the hotel as well - at least for part of the filming. The director and writer, Charles Marquis Warren, watched dailies at the hotel, probably in one of the convention halls. Fans would hang out at the hotel in hopes of getting a glimpse of Elvis. Towards the end of location work, Elvis held an impromptu concert in the hotel bar for the movie company. He reportedly sang for well over an hour. In addition, when filming wrapped at the studio, a wrap party was held - and again Elvis performed, probably on one of the sets for the film.

Charles Marquis Warren thought, after he had first heard Elvis sing in the fifties, that "he was a negro . . . the bits and pieces I heard him sing, he sounded like one." When National General, the movie company that financed the picture, told Warren that Elvis had read his script, liked it and wanted to play the lead role, Warren was aghast. The people at National General urged Warren to, "Just meet him, maybe you'll change your mind." They were right. Elvis and Warren met, for the first time, at a restaurant next to United Artists Studios called The Formosa. To quote Warren, "I liked him a lot . . . we didn't fall in love. He wanted to hear what I had to say. I wanted to hear what he had to say." After lunch Warren took Elvis to Western Costume Company to try on some cowboy clothes. Warren picked out "a bunch of crummy clothes . . . a worn out shirt and pants, scuffed boots and a beaten up hat." Elvis looked in the four way mirror and said in his typical modest way, "I like it, it it's all right with you." Warren thought Elvis looked great. Warren decided to put a beard on Elvis, to make him look more like a tough Western hero, but Elvis's new look didn't quite work; to quote Warren, "he looked like Jesus Christ."...

(January 8, 1935, Tupelo, MS – August 16, 1977, Memphis, TN)
Elvis Presley (full name Elvis Aaron Presley) is the most outstanding personality in showbiz ever since, and the most popular entertainer the world has ever seen! His musical influence within music history and its following generations of musicians is still unbroken. His huge 'Blast-Off' in the mid-1950s, the rising star from a simply called 'Hillbilly Cat' (at Sun Records) to a lascivious Rock'n'Roll singer with charisma, a male sex symbol (then at RCA Victor) soon popularized him as "The King of Rock'n'Roll" or simply "The King".
His first cut within his tremendous career happened between October 1958 and March 1960 while Elvis was on duty with the U.S. Army and stationed in Germany. It was there in 1959 when he met his later wife Priscilla Beaulieu at age 14. Elvis and Priscilla married on May 1, 1967 in Las Vegas (divorce in 1973). Elvis evolved into an all-around entertainer after his Army service and started starring in Hollywood films. 33 movies in total, including the two concert documentaries 'That's The Way It Is' and 'On Tour'. He again shook the world with his 1968 NBC Comeback TV Special after his movie period without any stage appearances.
This TV special included the first ever unplugged session presented together with musicians from the early days such as Scotty Moore and D.J. Fontana. 1973 saw THE TV mega event at all: Elvis Presley, 'Aloha From Hawaii via Satellite'! Elvis' Honolulu appearance, the first time that a show was broadcasted worldwide via satellite! He was ahead of his time! Elvis Presley had 148 US single chart hits, including some so-called double-sider when A- and B-side both hit the charts like his 1956 smash 'Don't Be Cruel b/w Hound Dog', plus 15 EP hits between 1956 and 1977. Two billion of sold media and sound carriers by Elvis Presley is the estimated number! He received 14 Grammy nominations until 1978 and three Grammy for his Gospel interpretations. Elvis was the youngest artist when honored with the Bing Crosby Award (Lifetime Achivement Award) in 1971.
He is presented in 5 Halls of Fame (Rock'n'Roll, Rockabilly, Country, Blues and Gospel). Six of his song interpretations are collected in the Grammy Hall of Fame. On top of it all Elvis Presley got the most gold and platinum records and a Diamond-Award. He definetly is the 'Best selling solo artist in U.S. History' (RIAA – Record Industry Association of America)! Elvis Presley CD albums, vinyl records as LPs or singles at 45rpm - Bear Family offers a huge number of various Elvis Presley CDs, vinyl-LPs and 45rpm singles, vinyl- and CD box sets, books and mags, DVDs, unique and extraordinairy memorabilia! Let's say it in the words of one of Elvis sixties album title: There is "Something For Everybody"! And hey, you name it! Elvis Presley is the King of Rock'n'Roll, the biggest icon in showbusiness, and a great person who lives on forever!
Bear Family Records treats his legacy with the most respect and an optimum capacity of expert knowledge.
Review 0
Read, write and discuss reviews... more
Close menu
Customer evaluation for "Charro! (Book & CD)"
Write an evaluation
Evaluations will be activated after verification.
Weitere Artikel von Elvis Presley
Hint!
Elvis Presley: The Pot Luck Sessions (5-CD) Art-Nr.: CD975160