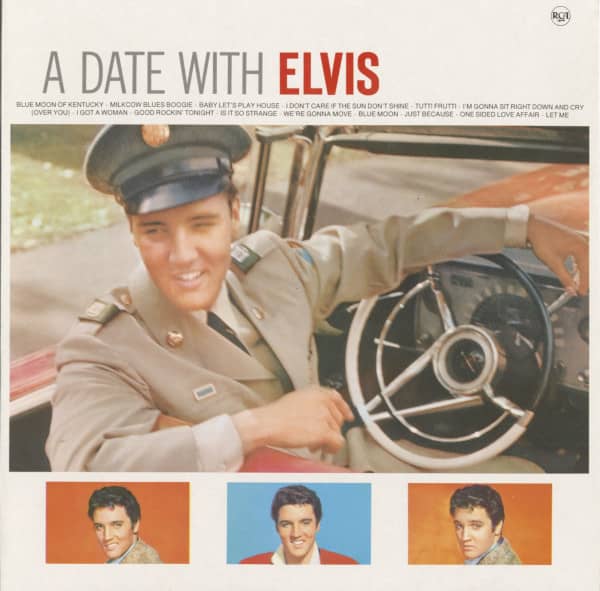 As this record climbed the charts the last single on the Sun label was released: "Mystery Train" combined with "I Forgot To Remember To Forget". The latter song and "Baby Let's Play House" are featured on this album with three other classic Sun recordings: "Good Rockin' Tonight", "Milk Cow Blues Boogie" and "Blue Moon Of Kentucky". Elvis's performances on stage were packed with power and originality and it was only a matter of time before this phenomenon was released on the rest of the world.

Later that year, RCA paid what was considered an amazing amount of money to Sam Phillips of Sun Records for Elvis's contract: $35,000, with an extra $5,000 going to Elvis for a transfer fee! Besides obtaining exclusive rights to an artist that would sell millions of records throughout the world, RCA also obtained the rights to all released and unreleased Sun recordings. Elvis's first recordings for RCA in 1956 produced the now legendary "Heartbreak Hotel" and "Don't Be Cruel".
In January 1958, after the success of his records and films, "Love Me Tender", "Loving You" and "Jailhouse Rock", Elvis was due to report to the army draft office in Memphis.

Elvis was soon to be serving his country in Germany. However, Paramount had already committed $350,000 to the production of "King Creole" and Elvis was granted a deferment. He reported to the draft office on March 24th 1958. While Elvis was away RCA released a regular flow of records including "A Fool Such As I" and "A Big Hunk Of Love". These, as expected, were million sellers. "King Creole", when released, received the best reviews so far for an Elvis movie and his popularity never waned. In August 1959 RCA released "A Date With Elvis".

This was what every fan wanted! On the back of the original sleeve was a calendar for 1960 with Elvis's release date from the army circled! Besides the Sun recordings, the album contained tracks from "Jailhouse Rock" and "Love Me Tender". An unissued ballad: "Is It So Strange" was also included. On March 5th Elvis was a civilian again and continued a staggering career that will probably never be equalled. So here it is, what every real fan wanted: "A Date With Elvis".

(January 8, 1935, Tupelo, MS – August 16, 1977, Memphis, TN)
Elvis Presley (full name Elvis Aaron Presley) is the most outstanding personality in showbiz ever since, and the most popular entertainer the world has ever seen! His musical influence within music history and its following generations of musicians is still unbroken. His huge 'Blast-Off' in the mid-1950s, the rising star from a simply called 'Hillbilly Cat' (at Sun Records) to a lascivious Rock'n'Roll singer with charisma, a male sex symbol (then at RCA Victor) soon popularized him as "The King of Rock'n'Roll" or simply "The King".
His first cut within his tremendous career happened between October 1958 and March 1960 while Elvis was on duty with the U.S. Army and stationed in Germany. It was there in 1959 when he met his later wife Priscilla Beaulieu at age 14. Elvis and Priscilla married on May 1, 1967 in Las Vegas (divorce in 1973). Elvis evolved into an all-around entertainer after his Army service and started starring in Hollywood films. 33 movies in total, including the two concert documentaries 'That's The Way It Is' and 'On Tour'. He again shook the world with his 1968 NBC Comeback TV Special after his movie period without any stage appearances.
This TV special included the first ever unplugged session presented together with musicians from the early days such as Scotty Moore and D.J. Fontana. 1973 saw THE TV mega event at all: Elvis Presley, 'Aloha From Hawaii via Satellite'! Elvis' Honolulu appearance, the first time that a show was broadcasted worldwide via satellite! He was ahead of his time! Elvis Presley had 148 US single chart hits, including some so-called double-sider when A- and B-side both hit the charts like his 1956 smash 'Don't Be Cruel b/w Hound Dog', plus 15 EP hits between 1956 and 1977. Two billion of sold media and sound carriers by Elvis Presley is the estimated number! He received 14 Grammy nominations until 1978 and three Grammy for his Gospel interpretations. Elvis was the youngest artist when honored with the Bing Crosby Award (Lifetime Achivement Award) in 1971.
He is presented in 5 Halls of Fame (Rock'n'Roll, Rockabilly, Country, Blues and Gospel). Six of his song interpretations are collected in the Grammy Hall of Fame. On top of it all Elvis Presley got the most gold and platinum records and a Diamond-Award. He definetly is the 'Best selling solo artist in U.S. History' (RIAA – Record Industry Association of America)! Elvis Presley CD albums, vinyl records as LPs or singles at 45rpm - Bear Family offers a huge number of various Elvis Presley CDs, vinyl-LPs and 45rpm singles, vinyl- and CD box sets, books and mags, DVDs, unique and extraordinairy memorabilia! Let's say it in the words of one of Elvis sixties album title: There is "Something For Everybody"! And hey, you name it! Elvis Presley is the King of Rock'n'Roll, the biggest icon in showbusiness, and a great person who lives on forever!
Bear Family Records treats his legacy with the most respect and an optimum capacity of expert knowledge.
Review 1
Read, write and discuss reviews... more
Close menu
Customer evaluation for "A Date With Elvis (LP - 1989 Compilation Germany Mono)"
From: BobCat On: 20 Sep 2018