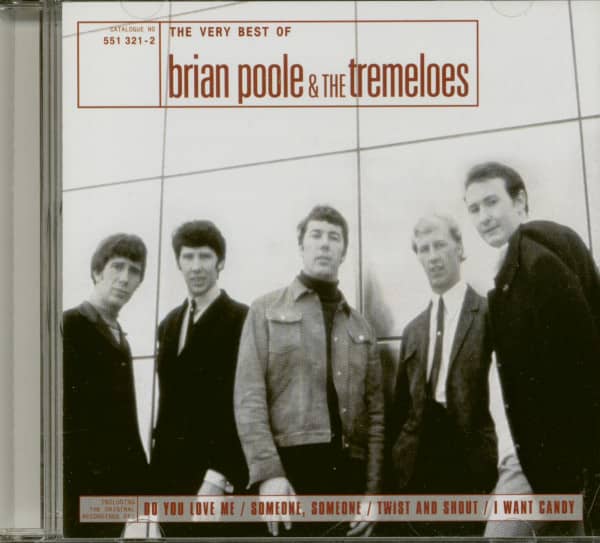 Many forget that Brian Poole & The Tremeloes were signed by Decca Records in direct preference to The Beatles. At the time (early 1962), both groups were virtually unknown, and it was felt that because Poole & Co. Came from Essex, they were much closer to hand than the quartet from Liverpool.
Poole (vocals), Ricky West (lead guitar), Alan Blakeley (rhythm guitar), Alan Howard (bass guitar) and Dave Munden (drums) assembled in Dagenham in 1959. They were considered promising enough to appear on BBC Radio's legendary Saturday Club in 1961, and in 1962 began their recording career, although early singles flopped. It wasn't until mid-1963 that they hit the chart, ironically with a cover of 'Twist And Shout', which had appeared on the first LP by The Beatles. It peaked in the UK Top 5, and their follow-up single was even bigger: 'Do You Love Me' was an American hit for Motown group The Contours, but the version by Poole & Co. topped the UK chart.

Six more hit singles followed: 'I Can Dance', a cover of Roy Orbison's 'Candy Man' (their third UK top 10 hit), a cover of `Someone Someone' by The Crickets (their fourth), 'Twelve Steps To Love', 'Three Bells' and 'I Want Candy', but in mid-1965, the hits stopped dead.
In 1966, Poole started an unsuccessful solo career, while The Tremeloes also started with two flop singles, after which Alan Howard was replaced by Len 'Chip' Hawkes. Between 1967 and 1971, The Trems were chart regulars, but that's another story, as is the fact that 1991 chart-topper Chesney Hawkes is the son of 'Chip'... Brian Poole & The Tremeloes enjoyed two years of fame when they seemed like possible rivals to The Beatles and The Stones. All their hits are here, plus choice album tracks and B-sides, and even a couple of previously unreleased rarities. A bargain or what?

Brian Poole formed the Tremeloes in 1959 in Dagenham, Essex. A competent group, they turned professional after the first of many regular appearances on the leading British radio show, Saturday Club. Their speciality was other peo-ple's hits — they even recorded an album, Big Hits Of '62, fog Ace of Clubs. However, their fortunes turned with the beat boom when, despite an anachronistic appearance and ap-proach, they covered the popular Beatles' album track, `Twist And Shout', in summer 1963. It was the first of six Top Twenty hits, including `Do You Love Me', a No. 1. Poole's chart reign lasted only as long as the unqualified group fever, barely into 1965. In 1966, he left the Tremeloes (who continued successfully without him) for an abortive solo career and today follows his original chosen occupation, the family butcher's shop. 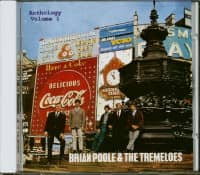 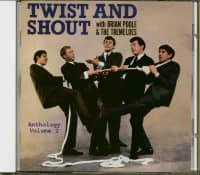 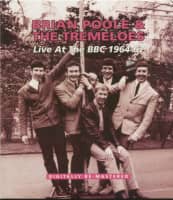 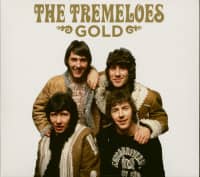