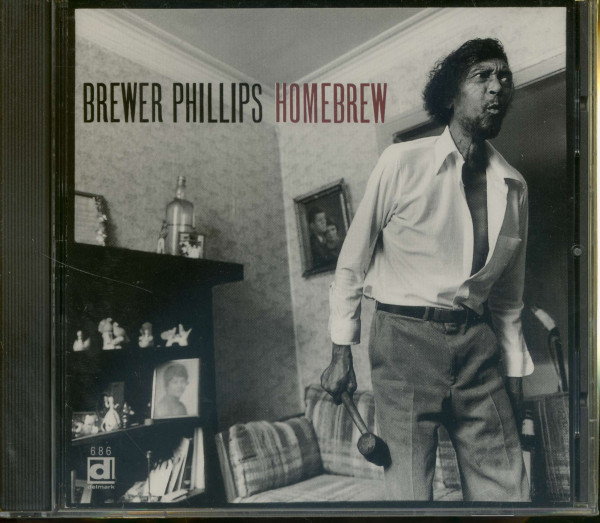 another fine example of the kind of music 'they don't make any more', as Dick Shurman points out in his liner notes. Brewer was a member of Hound Dog Taylor's trio, The Houserockers, from '59 to Taylor's untimely death in '75. An album of blues that could easily have come from some southern recording studio in the '50s. For all lovers of straight-ahead 'classic' Chicago style blues this is a real treat. BREWER PHILLIPS - gtr/voc, AARON MOORE - pno/voc, AARON BLACK - bass, 'HUCKLEBERRY HOUND' - drums.

From the legendary trio Houd Dog Taylor adn the Houserockers, Brewer Phillips is proof that heartfelt good time blues is alive and well in the 90's. with Aaron Moore and 'Huckleberry Hound'

A BLUES DETECTIVE SIFTING THE RECORDED EVIDENCE to see who concocted this heady Homebrew could identify some likely suspects. A Delta blues-based guitarist with a raw-but-jazzy style echoing Willie Johnson or Pat Hare and a just plain nasty tone, played by a musician whose former mentor was Memphis Minnie... a two-fisted, down home blues pianist whose barrelhouse vocals are a highlight of the proceedings, with skills that make his obscurity all the more remarkable.., and a bassist and drummer who sound like they just knocked the cottonfield dust off their overalls. "Right Now," "Lunch Bucket Blues" or "Hen House Boogie" could only have come from another early 1950s day at Sun Studios in Memphis with Sam Phillips at the console, or some Jackson, Mississippi Trumpet Records session, right?

Actually, no. While these 1995 sessions do have the timeless virtues that make not sounding up-to-date a compliment, we still have to fast forward forty years and north 400 miles from Union Avenue in Memphis. to Delmark's Riverside Studios in Chicago for the truth of the matter. Homebrew features singer-guitarist Brewer Phillips, who indeed has credentials from Beale Street and points south, but is enduringly known for his years as 1/3 of Hound Dog Taylor's Houserockers, churning out rhythm patterns
for the bass-less trio and tossing in screaming leads and an occasional rough-hewn vocal to give Hound Dog a break during their marathon workouts. Although this is Brewer Phillips' U.S. debut as a leader (at around age 70!). his story and name are familiar to hard-core blues buffs (and beautifully presented in depth by John Brisbin in living Blues issues 117 and 119).

Born in Coda, Miss. in the hill country on November 16. 1924 or 1925 (he isn't sure himselff, he stayed around Greenwood and the Delta. and the Memphis area long enough to play on Lonnie The Cat's "I Ain't Drunk" and Roosevelt Sykes' House Of Sound 45, and became a friend and student of Memphis Minnie's before moving to Chicago in 1958. Within a year he was playing with Hound Dog, a generally enduring alliance which persisted through some colorful blips on the screen (and each oth-er's medical charts) till Hound Dog's late 1975 death. Brewer and drummer Ted Harvey remained in some demand as the Houserock-eN, but apart from some travel mostly to Europe, Brewer's pri-mary turf reverted to ghetto sawdust joints. In 1982 he cut albums for small British and Austrian labels. In '93 he did a session in Fort Wayne, Indiana which remains unissued, leaving Delmark to provide this long overdue introduction to the American CD buying public.

Happily, Brewer finally got a chance to bring his long-time buddy, pianist and singer Aaron Moore, to a session. Born in Greenwood, Mississippi on February Ti. 1928, Moore was strong-ly influenced by Roosevelt Sykes, with Memphis Slim "somewhere in there." Vocally, the shadow of Junior Parker is also obvious. While still in school, Moore was broadcasting over WGRM in Greenwood. In 1951 he moved to Chicago, where he stayed till 1990 when he retired from his city job as a Supervisor for the Bureau of Sanitation and moved to Milwaukee. Despite gigs over the years with the likes of Muddy, Wolf (in Canada). Little Walter and Little Milton, Moore limited his musical activity in favor of his day job. He and Brewer met through Chicago bluesman Sonny Boy Williamson Jr. (Clarence Anderson) around ten years ago; an audition together led to sporadic gigs in Chicago and New York (for Bill Gilmore). It's no exaggeration to say that Moore is a revelation, enough so that plans for a project as a leader are being made; the empathy of his musical partnership with Brewer is also an exemplary ear-opener. Bassist Willie Black, too, has seen his share of dusty southern roads (it was during a '50s trip to Arkansas with Willie Cobbs that an encounter with the leg-endary Forest City Joe led Willie to put down the harmonica and focus on bass), but he's been based in Chicago since childhood, playing with— well, just about everybody, most recently Eddie C. Campbell and Little Smokey Smothers among others.

Drummer Robert "Huckleberry Hound" Wright also plays with Campbell and has led his own bands between sideman jobs, but will probably forever be best known for backing Magic Sam. For producer Pete Nathan, Brewer Phillips and Aaron Moore represent quite a change of direction (albeit an equally worthwhile one) from his previous Delmark project, Syl Johnson's Back In The Game. Brewer commented "Pete's hard to get along with, but he's a buddy of mine and he's the best I ever recorded with." Homebrew deservedly bears Brewer Phillips' name, but places him even as the credited leader in the ensemble-oriented role he filled so well with Hound Dog: an accompanist who puts the grease in the grooves, a soloist always dangerously capable of starting a grease fire and an occasional vocalist. With Hound Dog, his forte was a wild shuffle with power chords, knocks on the gui-tar pickups for rhythmic accents and maybe some familiar lyrics.

In this case, "You Don't Have To Go" is the archetype, but the feel is present throughout the program. His other vocals encom-pass the ribald double entendre "Lunch Bucket," and a version of the Jimmy McCracklin-Bo Diddley song "I'm Looking For A Woman" with a Latin rhythm and a southern country outlook. He evokes a slide-like sound with stringbending on "Laundromat ...

$124.43
Customers also bought
Customers also viewed
Homebrew
Tracklist
Phillips, Brewer - Homebrew CD 1
01 You Don't Have To Go
02 For You My Love
03 Your So Cold
04 Hen House Boogie
05 Lunchbucket Blues
06 Don't You Want To Go Home With Me
07 Blue Shadows
08 My Baby Don't Love Me No More
09 Laundromat Blues
10 Looking For A Woman
11 Cross Examination
12 Homebrew
13 Right Now
14 Tore Down
15 Let The Good Times Roll
16 Do What You Will Or May