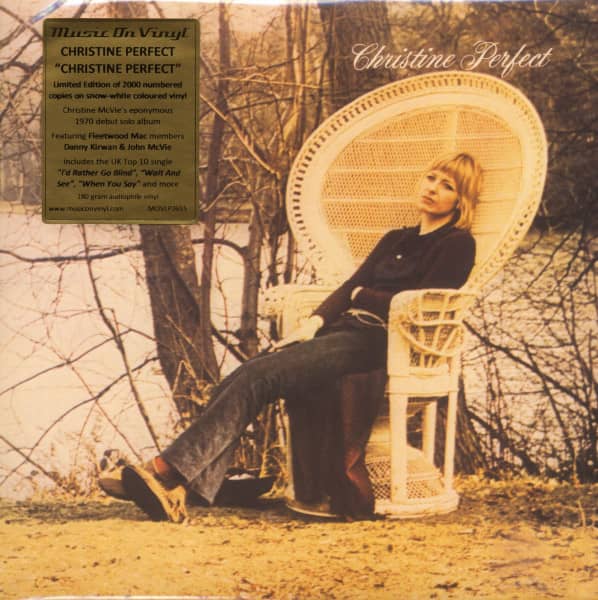 (Music On Vinyl) 12 tracks, white vinyl, limited & numbered to 2000 copies.
Englishwoman Christine Perfect worked with Spencer Davis in the early sixties and later led the group Chicken Shack before recording this solo album in 1970. By that time, she had recorded with Fleetwood Mac and was a couple with the group's bassist, John McVie. She then married McVie and became an official member of the group, as a singer, songwriter and on keyboards she influenced Fleetwood Mac's greatest hits.

In the U.S., this album - simply titled "Christine Perfect," Christine McVie's maiden name - was not released until 1976 through Sire Records, after the initial British release on the Blue Horizon label had already been a major import hit in the U.S. You didn't need to be a soothsayer to predict the album's success - it was surprising, however, that it didn't reach multi-platinum status.

The LP contains twelve songs, "I'd Rather Go Blind" reached the top ten in England. The placement was deserved, as this song is more than just another interpretation of Etta James' hit. The production and string arrangements of "When You Say" are reminiscent of the work of Marianne Faithful or Nico; however, the main difference was that, by the time this album was released in the U.S., the name Christine McVie was already widely known. Still, surprisingly, "When You Say" doesn't sound like Fleetwood Mac although band members John McVie and Danny Kirwan can be heard.

"Wait And See" is one of the highlights of the album while "And That's Saying A Lot" changes moods in such a way that it takes a while to grasp the complexity and perfection of this recording. The listener really needs to get away from McVie's glory and just listen to the music for its own sake, the superb combination of a voice with commercial potential and solid accompaniment. "No Road Is The Right Road" changes the vibe again, possibly a result of that phalanx of talent, starting with the Chicken Shack (Perfect's original band), to guitarist Top Topham of the Yardbirds, to Rick Hayward, later a member of Savoy Brown.

"For You" gives itself 'neo-rockabilly' with the sound of Dave Edmunds' "I Hear You Knocking," and "I'm Too Far Gone (To Turn Around)" - what an amazing masterpiece - is a '50s-style ballad played by Fleetwood Mac. This could have been a big hit for Fleetwood Mac when they were struggling, reaching into the mothballs of old tricks would have been just right for more attention from radio DJs.

The background to the legend that is "Christine Perfect" is more than just hype. With the cover photos and the music in between, this LP is the right cure for the obsessive fan of Fleetwood Mac.