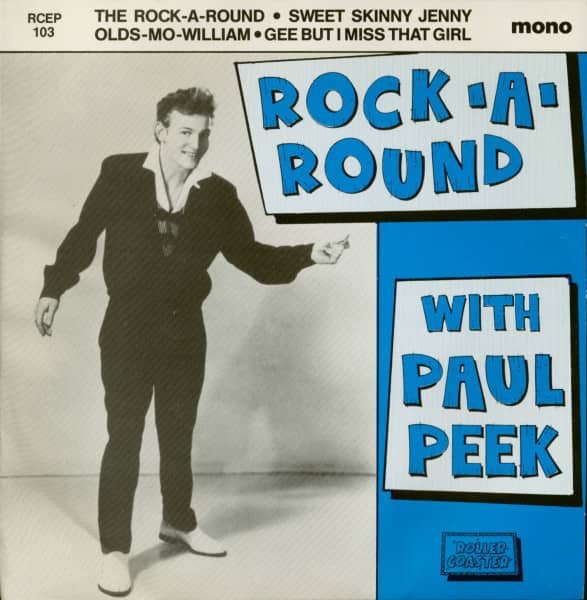 Remember the classic rock'n' roll movie `The Girl Can't Help It'? Remember the crazed, agonised vocals of Gene Vincent clawing his way through Be-Bop- A-Lula whilst a red-headed rhythm guitarist nearly stole the limelight? That redhead was Paul Peek back in 1956 at the start of a two-year stint as a Gene Vincent Blue Cap.

By the turn of 1957 Peek was acting a dual role as a Blue Cap whilst attempting to launch a solo career. He signed for Bill Lowery's Atlanta-based and newly formed NRC label, and cut a superb double-sided classic The Rock-A-Round b/w Sweet Skinny Jenny (NRC 001). Paul's frantic vocal and a driving backing provided by Joe South and Jerry Reed on guitar, Esquerita and his friend LC on piano, Bill Mack on upright bass, Nelson Rogers on drums and Ray Jones on sax, deserved to make NRC's first release an immediate success - but it was not to be.

Paul's second NRC release was a Coasters-type novelty song Olds-Ma-William which gained considerable media attention - including an appearance on the Dick Clark Show! Gee But l Miss That Girl reveals another facet of the Paul Peek repertoire - a teen ballad penned by fellow Blue Cap Bobby Jones and featuring Bobby on bass.

Paul has stuck with the music business right through to the present time including playing a leading part in the 1982 Blue Cap reunion tour of the UK. Here though, we have the solo talent of Paul Peek at his early best - a real 'Rock-A-Round!