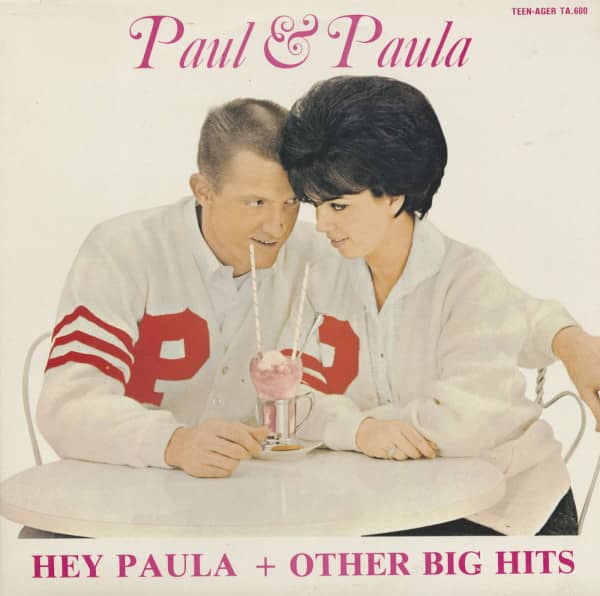 P Secure bonuspoints now
Description
Learn more about Paul & Paula
Review 0
Description
Even in a business as prone to lightning as the entertainment business, the story of "Paul... more
Close menu

Even in a business as prone to lightning as the entertainment business, the story of "Paul and Paula” is extraordinary. They've simply made it that fast. The two kids came out of Texas in November, 1962, their vehicle was a Philips record titled Hey, Paula. This record geared the wheels of more chart winners. "Paul &&, Paula Sing For Young Lovers" short/y after its release, became one of the top "10" albums in the nation.

Later their single recording of "Young Lovers" jumped on the charts of the leading trade magazines, and rapidly soared into the top "10" of the singles. Young Lovers is still holding position in the magazines, as Paul &&, Paula are still holding the attention and adoration of "teens" throughout the nation. Yet, as it rarely happens (but just often enough so that kids everywhere can dream), here they are today, established personalities, thanks to the very first recording they ever made.

How'd it happen? Well, for one thing, as the title of this album indicates, they "go together.” They blend. Their voices are complementary. They make sense as a team. Even more than that, in doing what they do, singing what they sing, being what they are, they make a powerful appeal. They've been called, "America's number one boy and girl," and they might well be. They represent, in a very real sense, the kind of boy-girl combination that this country has always taken to heart, a 1963 version of the Janet Gaynor-Charles Farrell team of “Seventh Heaven."

In a growing sense, they also are the very people they sing about- "The Average Boy, the Average Girl” who go together like "two straws in a soda." The subjects of their songs are the subjects other boys and girls find important and for good reason-”We Go Together” . . . "Pledging My Love” . . . "Flipped Over You" . . .”The Beginning of Love." They sing of a world that is brand new. to them, where kids pair off, maybe forever. Sentimental? Sure. Naive? Maybe. But so very real, especially when you're young. And sometimes even when you're not. Here's "Paul and Paula."

About this recording... This album was recorded monaurally and stereophonically in Nashville. instruments and mikes included." Te/e U»48's on all vocalists, Tele U-48's on snare drum and rhythm guitar, Tele U-48's on electric bass, electric rhythm guitar, bells and sax. Bass drum was picked up on an E/V 600. The session was recorded on Ampex equipment at 15 inches per second