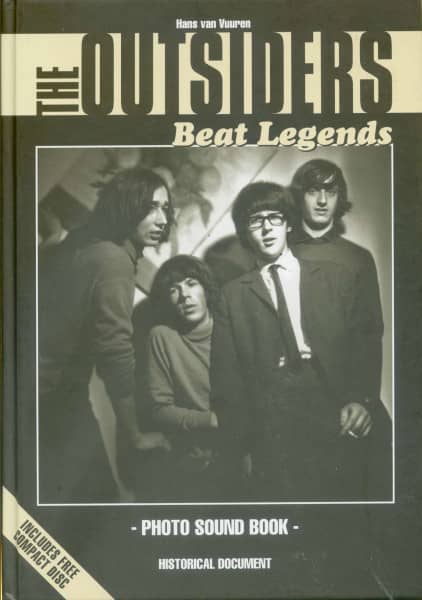 THE OUTSIDERS were stars from the moment they outshone The Rolling Stones, when they appeared as their supporting act in the 'Brabanthallen' in March 1966. With all that stardom entailed: hits, delirious fans and exaggerated newspaper headlines about their long hair and wild performances. But the bubble burst before singer Wally Tax's 21st birthday and THE OUTSIDERS split up. What remained is the memory of one of the best beat bands that The Netherlands has ever known.

Beat Legends tells the story of THE OUTSIDERS in words and pictures, with wonderful photographic material, legendary record sleeves and tantalising newspaper cuttings. Plus a free CD of unique live recordings of THE OUTSIDERS at the pinnacle of their fame, the first two singles for the illustrious Muziek Expres label and a radio session for the progressive broadcasting company the VPRO, recorded in the then newly opened rock club Fantasia.

Thinkin' about yesterday
What was it about The Outsiders? The rural Zaanstreek was buzzing. The Outsiders had just performed. In the hall at 'Ben and Ans' bar in the provincial town of Wormer. It must have been legendary, last Sunday afternoon. The Outsiders from Amsterdam. In Wormer. All kinds of stories circulated. Rumours. It had been really wild. The place was smashed up. I heard the word rough. Rough. I tried to imagine what that word meant. I saw vague outlines of thrashing teenage heads. Long hair. Denim jackets. Screams emanating from wide open mouths. There was no-one I could ask. I was thirteen. Living out in Krommenie. Even there people were talking about it. The Outsiders at Ben and Ans. That was quite something. They said the police were there too. And the mayor! But I didn't know anyone who was actually there. No-one could tell me what really happened that afternoon.

Soon after that our junior football team had to play in Wormer and we cycled past Ben and Ans. I was surprised to see that it was a typical local bar, the exterior tastefully painted in traditional green. No sign of destruction. No boarded-up windows or smoking ruins. Freshly cleaned window panes. A poster advertised the band for the following Sunday. Not a provocative name. What was it about The Outsiders? I didn't manage to find out much at all. We didn't have a TV at home and the radio was always tuned to a staid adult station.

The newspaper was full of politics. Beat music didn't exist as far as the TV guide was concerned. Then I discovered an Outsiders' record in Krommenie's one and only record shop. A compilation disc: Outsiders Songbook. A promotional record produced by the magazine Teenbeat. 7 guilders and 50 cents. On the front cover the four boys from the band. wearing black hats and capes. Fourteen songs. And a note on the back: an extra, The Outsiders talking exclusively with their manager John B. van Setten. That decided it for me. It was time to be initiated. Into music. But most of all into the band's secret. I had to get to know the band members. Exclusively. I was going to find out what it was about The Outsiders. The songs were wonderful. An earthy base. Solid, jaggedly rattling, but sturdy nonetheless. Ricocheting, supple guitar music. Lyrical texts, dreamily melancholy. As far as I could tell with my rudimentary school English the songs were all about not being understood. I could understand that. Being misunderstood. Or being understood fleetingly, too briefly, and then no more. I understood that. In love, in longing, in life. That will happen one day.

I thought, I can already feel the poignancy. Beautiful songs. But it was the short inte views between the numbers which really unsettled me. They only deepened the mystery of The Outsiders. Every word that John B. coaxed from the boys increased the mystery. Like pronouncements from the oracle. Sentences of such apt simplicity that they stunned me. I've many years to go, I thought as I listened to the record player in my attic room, before I can truly understand the deeper meaning of these nonchalantly revealed truths. If I ever do. Question from John B.: 'Do you enjoy sport?' A derisive snigger in the background. Leen? Appie? Wally answers as usual: 'I enjoy watching boxing, and sports like that, which let you express your aggression!' Dazed, I flicked through my school diary, which I'd decorated with Ban the Bomb symbols...