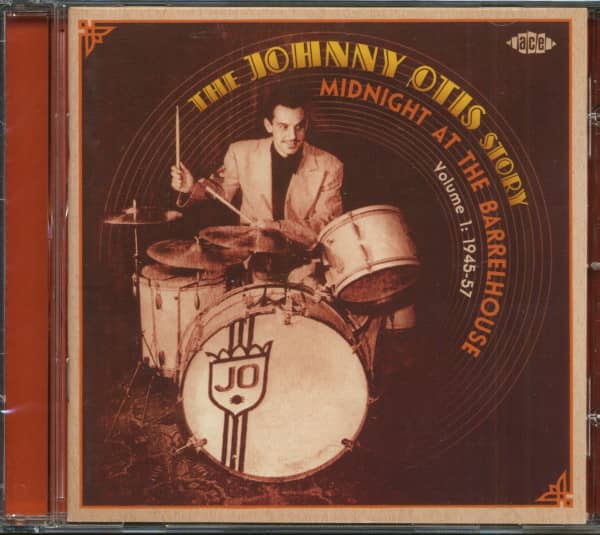 There can’t be many people who have done more in the name of rhythm & blues than John Alexander Veliotes – Johnny Otis to his friends and fans.
Johnny has packed a lot into his lifetime: author, father, painter, radio DJ, TV host, sculptor, political activist, priest, farmer and much more besides. But whatever he’s known for, it’s the music he’s been making since the mid-1940s that has always endeared him to record collectors and marked him as one of the true originators of R&B.
Johnny turns 90 as 2011 draws to its close, and Ace felt that this momentous occasion should be marked by not one but two CDs in celebration of Johnny’s life and more than thirty years of recording activity. “Midnight At The Barrelhouse” is the first volume, and the repertoire embraces Johnny’s early years as a bandleader through to the peak of his worldwide popularity with his first and biggest Capitol hits. The second volume, “The Show Goes On”, will carry on with more Capitol classics and take us through to Johnny’s 1970s successes on Okeh/Epic and his own Hawk Sound label.
Johnny always downplayed his skills as a vocalist but, as can be heard throughout our programme, his singing was always as enjoyable and recognisable as anyone who ever fronted his band. He can also be heard on drums and vibes throughout the set. Even though he’s not always the featured artist, his role in the creation of each and every one of these tracks is always apparent. Our selections here also showcase the great musicians from his classic early bands such as Pete “Guitar” Lewis and Devonia “Lady Dee” Williams, plus vocalists of the calibre of Marie Adams, Bobby Nunn (and the Robins), Big Mama Thornton and Little Esther. Many of these tracks will be as familiar as family to Johnny Otis devotees, but we have managed to disinter several terrific unissued cuts from the 1950s to gladden the hearts of even the most ardent completist.
By Tony Rounce