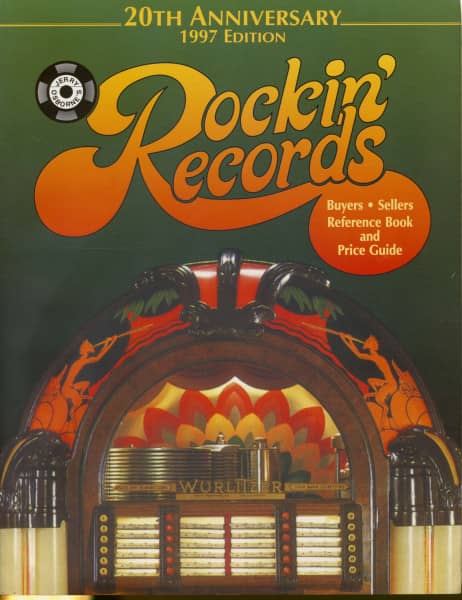 INTRODUCTION
What's New
THE FIRST 20 YEARS: WHAT A LONG STRANGE TRIP IT'S BEEN
Okay, so it's been 20 years since the world's first Record Collector's Price Guide came out. Honestly, though, none of that would matter if, in looking back at that first (1976) book, one failed to see 20 years of improvements within our pages. We fell certain that this 20th Anniversary Edition, with over 50,000 times the number of records priced in our first book, more than adequately represents the payoff for 20 years of labor. Nevertheless, it is still a work in progress. I doubt it would surprise anyone if — come 2006 — the 30th Anniversary Edition makes this current edition look tiny and incomplete by comparison. Of course, we can't rule out the possibility that by then all publications containing such voluminous amounts of data are available only on whatever medium is the 2006 equivalent of today's CD ROM technology.

Finally, for those fairly new to the field, perhaps a brief explanation is in order as to why our 20th Anniversary Edition is also the 18th Edition of Rockin' Records. Even though it has been 20 years (and 54 books) since our first record guide, many earlier ones came out before we finally settled on the Rockin' Records title and format, and began counting its editions. Now that that's clear... For 20 years you've been there for us. For just as long we've been there for you. A nice arrangement indeed.

WE BEEN SEARCHIN'. . YEAH SEARCHIN'
Boy, did we ever get dusty. In our never ending quest to make the information in Rockin' Records as accurate as possible, one of our big projects during the past year was to compare the data already in the guide to as many actual record labels as possible. Made available to us for this undertaking were several private collections that — combined — provided us with hands on access to approximately 10,000 of the world's most valuable 45s, most of which are R&B. Amazingly, close to half of them afforded us some tidbit of new information — from details as critical as correcting errors in an artist's name, label, selection number, or song title, to countless fragments of minutiae that would interest only a few hard-core aficionados — like us. You may refer to this book hundreds of times and not notice even one of these enhancements, but believe us, they are there. Also, any of these records previously shown and priced only by label are now listed individually, each by selection number and title. We plan to hit the road again in the months ahead, making comparable improvements in time for the 19th edition.

ONE YEAR AT A TIME
Responding to the many who have suggested that we drop the dual or split years from the identification of each edition, consider it done — effective now. This edition is the 1997 guide; not 1996/'97.
The automobile industry has for many years introduced their new models during the previous year. Why not us? It is clearly the more sensible approach and will cause less confusion.

PICTURE DISCS CHAPTER COMPLETED
In 1990, Joe Lindsay produced the benchmark record guide, Picture Discs of the World. Even though Joe has expressed no interest yet in publishing a subsequent edition, he has continued to maintain and update his picture disc database. Since the topic of picture discs has long been one of special interest to Lindsay, and with all that up-to-date information readily available, we agreed to introduce and maintain a separate Picture Discs chapter in Rockin' Records. As in past editions, domestic picture discs by an artist who has a section in the body of the book (A-Z) will still be found there. The new picture discs chapter is where you will find releases by the myriad of beings — not all are human, as you'll see — who do not have a section of their own in the guide. Just as with the rest of the guide, additions, corrections and price revisions for the Picture Discs chapter are always welcome.

VARIOUS ARTISTS CHAPTER TRIPLED
Besides picture disc research this past year, Joe Lindsay also spent several months completely overhauling the Various Artists Compilations chapter. Joe sifted through every single piece of correspondence received from contributors, revising prices and adding thousands of new titles. Many performers who appear on records already in the guide have also been added. Much to even our surprise, the Various Artists Compilations chapter in this edition has actually tripled from its size last year. At around 300 pages, it now is literally a book within a book.

THE EVER-WIDENING GRADING GAP
It will surprise no one to learn that the gulch between GOOD and MINT is gradually becoming a canyon. The drift toward widening the grading gap that began about 10 years ago shows no signs of slowing. To keep pace with this phenomena, changes have been made in the guide to reflect the ever-increasing premiums being paid for mint condition items. A value spread that a decade ago rated GOOD at about 20% of MINT is now at around 10%. Look for the gap to widen further in years ahead. Most industry observers do not foresee a narrowing trend during this millennia. Now, on to this years...

Jerry Osborne's name and background are eminently well known to those in the business and hobby of collectible records. However, to those recently captivated by this fascinating pastime, or soon to be, a bit about Jerry: A collector of records for over thirty years, Osborne has been authoring record price guides and reference books full time since 1975.

His published works on music now number over three dozen and counting, as he continues on a several-books-a-year schedule. In related ventures, Jerry writes the popular, weekly newspaper column, "Mr. Music," answering readers' questions on music and records (syndicated nationwide by World Features Syndicate). He is the radio voice of the popular "Mr. Music's History of Rock and Roll Trivia." Osborne also publishes the popular, internationally distributed DISCoveries magazine for record collectors, offering an affordable vehicle through which they can buy, sell, and trade.

Jerry Osborne's influence and involvement in record collecting has been chronicled in virtually every major magazine and newspaper in the country: Reader's Digest ,The Wall Street Journal, USA Today, People Magazine, Esquire, Woman's Day, Oui, National Enquirer, Money, Changing Times, Photoplay, High Fidelity, Billboard, Cash Box, Music City News, and Rolling Stone, just to name a few. No one person has been more responsible — directly or indirectly — for the amazing growth of the hobby. He has been a frequent guest on many major radio and TV talk shows, discussing the record collecting hobby.

Among these are: "Good Morning America," "The Today Show," and The Nashville Network, plus too many local and regional shows to count. Jerry was previously a technical advisor and consultant for the critically acclaimed ABC-TV nostalgic news-magazine program, "Our World," and he has served as a consultant for HBO and CBS-TV's "West 57th Street." He is the author of two other House of Collectibles titles: The [email protected] Price Guide to Records and The [email protected] Price Guide to Memorabilia of Elvis Presley and the Beatles.