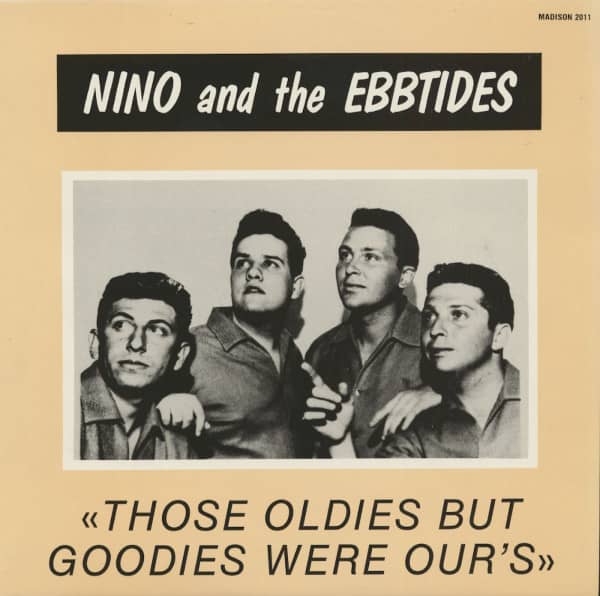 Nino & The Ebbtides: Those Oldies But Goodies Were Our's (LP)

Article properties: Nino & The Ebbtides: Those Oldies But Goodies Were Our's (LP)

In 1956 the Bronx N.Y. Antonio (Nino) Aiello and Vinnie Drago, school buddies formed a Singing group 'The Ebb-Tides'. They added Tony Delesio and a fellow named Rudy,who was older and used to sing with the Pexels. They rehearsed two songs, Nino and Vinnie penned, 'Franny Franny' and 'Darling I Love Only You'. Their break came when they met a gentleman by the name of Murray Jacobs who invited them down to his studio to record. Before the group entered the studio to record, their second release 'Puppy Love' a personal change took place. Ralph Bracco replaced Rudy and Tony was replaced by Tony 'Bimbo' Imbimbo. This group recorded 4 or 5 records until 1960, when Tony Dibari replaced Ralph Bracco. Tony ar 'Slim' as he was known by had sang in Bimbo's old group 'The Treble-Chords' of 'Teresa' fame. The group changed labels moving from ReCorte to Marco and within one more year in 1961 to the Madison label. It was now the group clicked nationally covering a West Coast local hit by Little Caesar and The Romans 'Those Oldies but Goodies' with the newest member Tony Dibari singing lead. The next year the boys followed up with their smash disc 'Juke Box Saturday Night'. The group now at the peak of their career experienced the fact, that their label went bankrupt. They had e few more releases on 2 more labels, but by 1964 The British Invasion changed the music scene drasticly. All the members of the group had succesful day jobs and the time was right to retire. They did reform about 5 years later in 1970-71 for a Rock and Roll Revival Show, but after that they once again disappeared leaving their musiv behind for the collector to enjoy forever.