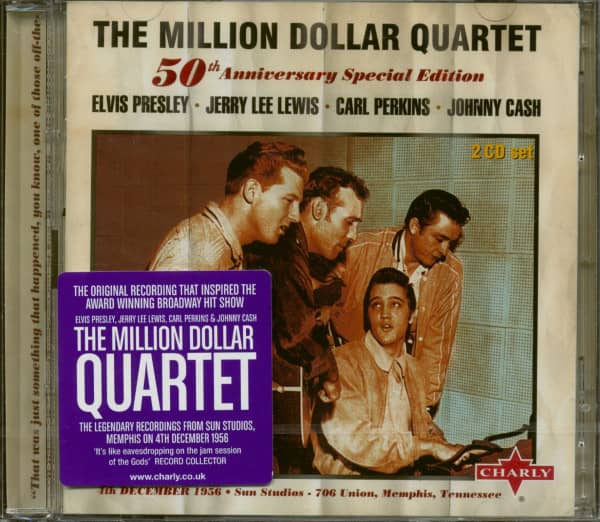 This year marks the 50th Anniversary of a one-off meeting of rock ‘n’ roll giants at Sun Studios on December 4th 1956. The recordings made on that day by the so-called Million Dollar Quartet really do have legendary status.

Carl Perkins was completing a recording session at which Jerry Lee Lewis had been playing piano for him when Elvis Presley dropped by to visit his old friends at Sun, where he had made his first seminal recordings a couple of years earlier. The scene was set for an extraordinary, impromptu jam session which was fortunately recorded for posterity by Sam Phillips.

Supported by Carl Perkins’ band, Elvis, Carl and Jerry spontaneously run through a mixture of popular songs of the day, country favourites as well as old country-gospel tunes which so influenced the trio.

Johnny Cash’s actual involvement in the surviving tracks featured has for many years been a matter of conjecture. Although his voice does not seem to appear on any of the surviving tracks, several reliable authorities, including Cash himself in his autobiography, have stated that he was definitely present and performed on several songs.

The music we hear is a mixture of snippets of songs, passages of dialogue as well as several complete or near-complete songs. In one particularly fascinating segment, Elvis talks about and sings three of his own then – current songs, ‘Don’t Be Cruel’, ‘Paralysed’ and ‘That’s Where Your Heartaches Begin’.

Disc One of this special anniversary double set includes all the performances by the Quartet which have been found to date. Although other songs are known to have been performed on the day, they have not been found and are now presumably lost forever.

Disc 2 of this unique set features eight specially chosen solo titles from each of the Quartet members. 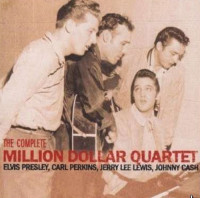 Tracklist
Million Dollar Quartet, The - 50th Anniversary Special Edition (2-CD) CD 1
01 You Belong To My Heart
02 When God Dips His Love In My Heart
03 Just A Little Talk With Jesus
04 Walk That Lonesome Valley
05 I Shall Not Be Moved
06 (There'll Be) Peace In The Valley (For Me)
07 Down By The Riverside
08 I'm With The Crowd But Oh So Alone
09 Farther Along
10 Blessed Jesus, Hold My Hand
11 As We Travel Along On The Jericho Road
12 I Just Can't Make It By Myself
13 Little Cabin Home On The Hill
14 Summertime Is Past And Gone
15 I Hear A Sweet Voice Calling
16 Sweetheart, You Done Me Wrong
17 Keeper Of The Key
18 Crazy Arms
19 Don't Forbid Me
20 Brown Eyed Handsome Man
21 Out Of Sight, Out Of Mind
22 Brown Eyed Handsome Man
23 Reconsider Baby
24 Don't Be Cruel
25 Don't Be Cruel
26 Paralysed
27 Don't Be Cruel
28 There's No Place Like Home
29 When The Saints Go Marching In
30 Softly And Tenderly
31 Is It So Strange
32 That's When Your Heartaches Begin
33 Brown Eyed Handsome Man
34 Rip It Up
35 I'm Gonna Bid My Blues Goodbye
36 Crazy Arms
37 That's My Desire
38 End Of The Road
39 Black Bottom Stomp
40 You're The Only Star In My Blue Heaven
41 Elvis Farewell
Million Dollar Quartet, The - 50th Anniversary Special Edition (2-CD) CD 2
01 That's All Right
02 Movie Magg
03 You're A Heartbreaker
04 My Treasure
05 I Don't Care If The Sun Don't Shine
06 You're My Baby
07 I'm Left, You're Right, She's Gone
08 New Mexico
09 I Forgot To Remember To Forget
10 That Lucky Old Sun
11 Turn Around
12 Dixie
13 Honky Tonk Gal
14 Milkcow Blues Boogie
15 Belshazar (undubbed version)
16 The Marine's Hymn
17 Sure To Fall
18 Train Of Love
19 Will The Circle Be Unbroken
20 Keeper Of The Key
21 I Was There When It Happened
22 Old Time Religion
23 Be Honest With Me
24 Silver Threads (Among The Gold)
25 Mystery Train
26 Lonely Street
27 Goodnight Irene
28 The Great Speckled Bird
29 Forever Yours
30 Leave That Junk Alone
31 Hand Me Down My Walking Cane
32 Baby, Let's Play House
Funktionale