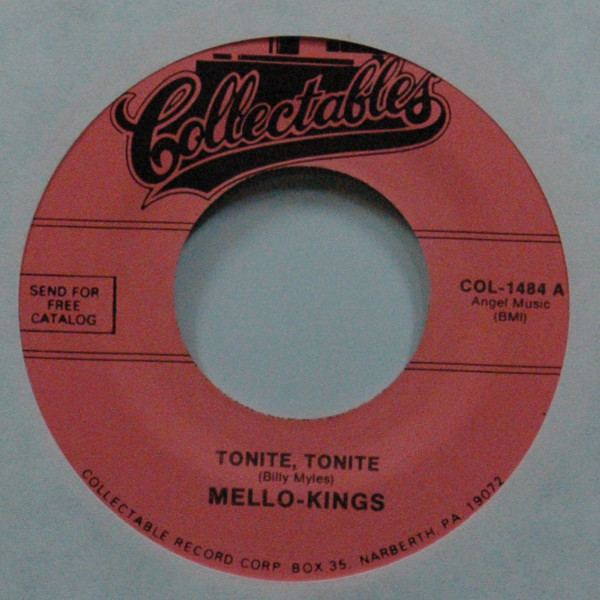 From Mount Vernon, New York, their formation was different from their inner-city brethren. Brothers Bob and Jerry Scholl (lead tenor and high tenor) and second tenor Eddie Quinn came together in 1956 while auditioning for a Washington High School production of 'South Pacific.' Pianist Dick Levister organized them into The Mellotones, joined by baritone Neil Arena and bass Larry Esposito.

Al Silver, owner of New York's Herald Records, gave their audition a thumbs-up, inviting them to check out some fresh material by Billy Myles, a songsmith from Greenville, North Carolina just emerging on the New York scene. They went for Myles' pretty ballad Tonite, Tonite and cut it at their first Herald date along with Levister's romping Do Baby Do (Bob Scholl fronted both). The initial pressing billed the group as The Mellotones, but a group with the same name was concurrently enjoying a hit on Gee with Rosie Lee. Silver repressed Tonite, Tonite as by The Mello-Kings. It made it to #77 pop late that summer, but that doesn't reflect the song's popularity. It recharted in early '61 as an oldie but goodie, stopping at #95.

"That's one of the top five, they say, oldies but goodies," claimed the late Myles, who had his own 1958 hit with The Joker (That's What They Call Me) on Silver's Ember imprint.

Bob Crewe and Frank Slay wrote The Mello-Kings' initial Herald encore, the upbeat Sassafras, but it didn't hit that autumn (maybe they should have pushed Myles' Chapel On The Hill on the B-side). Just before year's end, Herald released their ballad The Only Girl (I'll Ever Love), composed by Levister and Quinn, and the following spring the Mello-Kings crooned Valerie, co-penned by Paul Evans. Arena was out the door that spring, accounting for the four-man lineup that appeared in the British film 'Sweet Beat' miming Tonite, Tonite (Myles and the Five Satins were in it too). Esposito soon left as well, necessitating the pickup of Tony Pinto and Louis Jannacone. The new lineup waxed the infectious Chip Chip in late '58.

Herald released Mello-Kings singles through 1961. A one-off single for Lescay in '62 closed out the group's catalog, but the Scholl brothers, Jannacone, and Pinto worked Richard Nader's rock and roll revival shows at decade's end. Sadly, Bob Scholl drowned in 1975, but Jerry still leads a performing lineup of Mello-Kings.