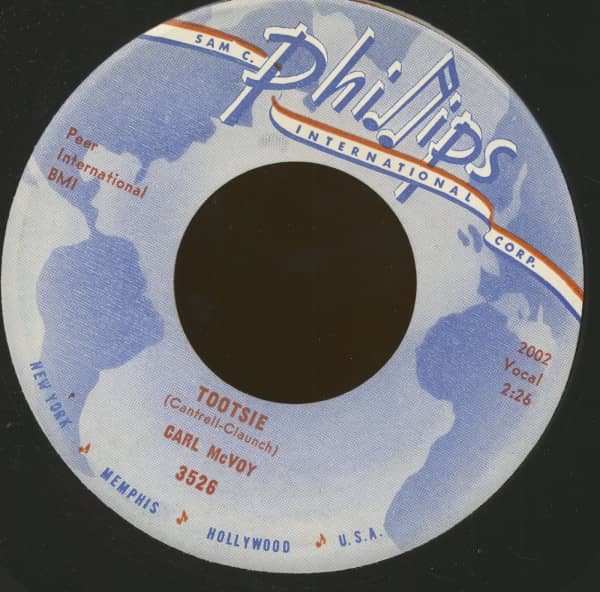 There are still some folks out there who don't accept the science of behavioral genetics. That's because they've never met Jerry Lee Lewis, Mickey Gilley and Carl McVoy. These three cousins, or in the case of Gilley - second cousins, make a strong case for the inheritance of temperament and talent.

The relationship between McVoy and Sun Records is a curious one. In 1957 he traveled to Nashville to record a session for Hi Records. It resulted in You Are My Sunshine, which began stirring far more interest than the fledgling Hi label could handle, so the results and the artist were sold to Sun (who released Sunshine on their Phillips International label). From there, McVoy became a Sun artist.

Despite the fact that he recorded at least 14 titles for them over the course of six sessions in 1957 and 1958, nothing more was released. It's hard to know just why all this music was shelved during some of the most active of Sun's rocking years. McVoy recorded My Bucket's Got A Hole In It three months before Sonny Burgess did. Nothing. He cut Born To Lose one year before Johnny Cash did. Again, nothing. Like his cousin Jerry Lee, McVoy cut You're The Only Star In My Blue Heaven. In July, 1958, he cut Right Behind You Baby, three months after Ray Smith's record had come out. At that same session, he recorded the Charlie Rich song Little Girl, presented on this compilation in a version by Ray Smith. That same July, 1958 session resulted in McVoy cutting A Woman's Love - a song bass player Stan Kesler later placed with Elvis Presley (retitled The Thrill Of Your Love) on the 1959 'Elvis Is Back' LP. Again, close, but no cigar.

Satisfied is the last song that Carl McVoy cut for Sun before moving back to Hi Records to concentrate on production work - as engineer and studio musician. The track is a good blend of sanctified gospel and pop music. This kind of hybrid - with its 1 - 6 minor chord riffs - has great staying power within rock 'n' roll. (Its black equivalent was a career-launcher for the Isley Brothers.) Even cousin Jerry Lee dabbled in the genre with It Won't Happen With Me, Sun 364, but by the time Jerry Lee's record appeared in 1961, cousin Carl was working across town behind the scenes at Hi Records.