Wishlists
Categories
Information
Article successfully added.
This article is deleted and can no longer be ordered!
Please inform me as soon as the product is available again.
P Secure bonuspoints now
Description
Learn more about Janis Martin
Review 0
Description
(1992/HYDRA) 19 tracks - Janis Martin and the Continentals, Live at the Star Club, Vienna (plus 2... more
Close menu 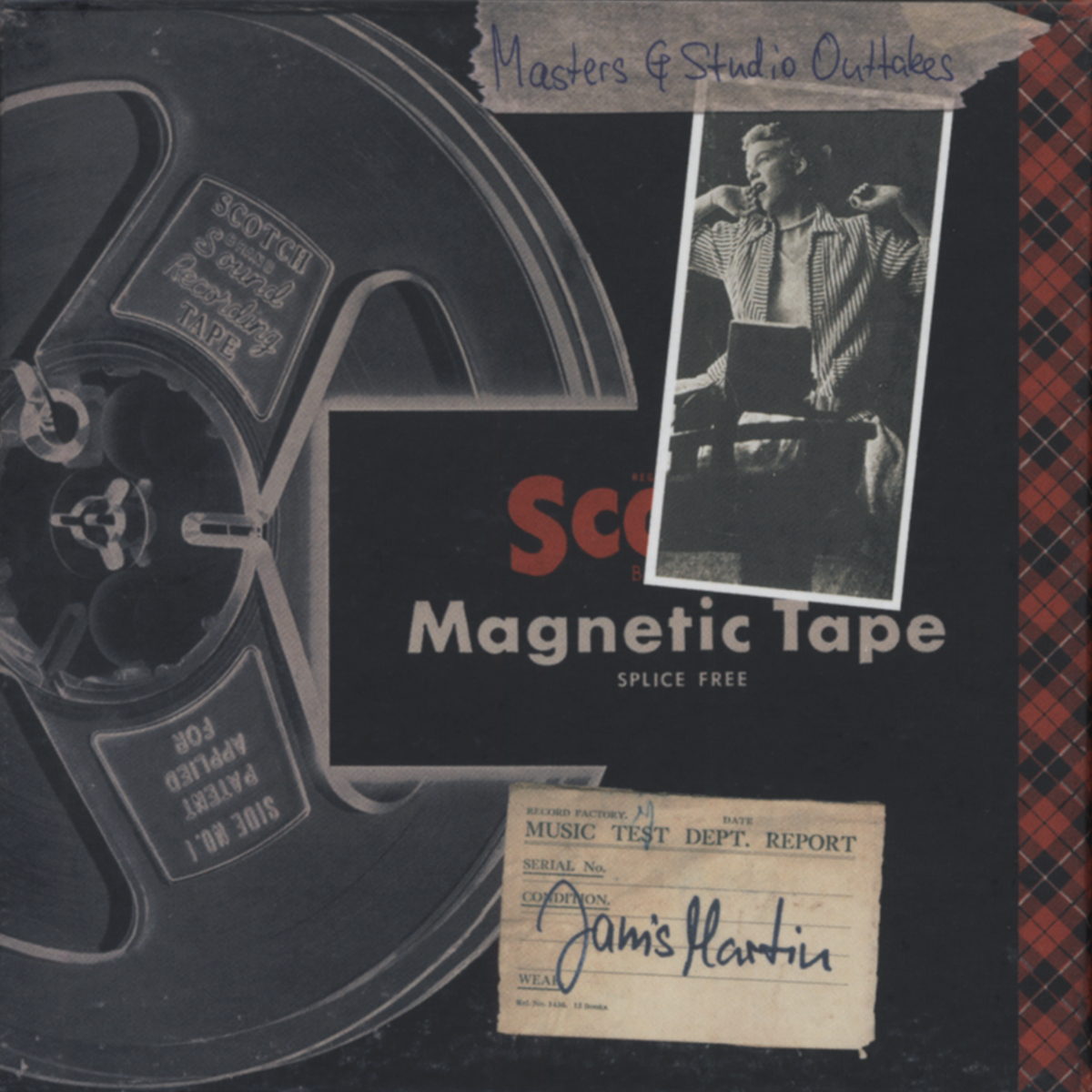 Janis Will Rock declared the Rock-a-Teens in 1960. How right they were…and, of course, they should know, because they were from Janis Martin's home town, and thus saw her in her hip-shaking ponytail-and-dungaree prime. Janis was one of the very few women to challenge the notion that rock 'n' roll was a boys club. While some women had a hard time with rock 'n' roll's incendiary nature, Janis was one of the few to truly unravel its sweet little mysteries. She had her chances: she was on the biggest record label with the top guys behind her, and she was on 'American Bandstand,' the 'Tonight Show,' 'The Today Show,' 'The Grand Ole Opry,' and 'The Ozark Jubilee.' But the hits that should by right have been hers, didn't materialize, and Janis retired from the business around 1960. Out of music, she was unaware that her records traded hands at ever higher prices, and that collectors across two continents were wondering whatever happened to her.

If a record collector named Ed Bayes hadn't doggedly pursued Janis Martin and found her working as a police despatcher, we might still be in the dark about her. A 1977 feature in the British magazine 'New Kommotion' started with "not too much is known about this lass,"  and proceeded to paraphrase a mini-bio that had been published in 'Country Song Roundup'in August 1956. The 'CSR' feature gave only the briefest rundown of her career and told us that "the girl with the Elvis Presley voice" was on her way to Hollywood for a screen test. There was another piece in 'C&W Jamboree'in September '56, and that was about it for national coverage in the 1950s. Ironically, just before the 'New Kommotion' article came out, Ed Bayes had rediscovered Janis, but we'll get to that in a moment.

Although she spent eight years in Akron, Ohio as a child, Janis Martin has always considered Virginia home. She was born Janis Darlene Martin in Sutherlin (not Southerlin, as some sources have it), Virginia on March 27, 1940. When you consider that Ringo Starr, who epitomized a later generation, was born just four months later, you realize how young she was when she started. Janis was born into a family deeply immersed in the music business. "I had a mother who was a show business/stage type mother," she told journalist Bob Allen. "Both my father and my uncle were amateur musicians, and I can't remember a time when I didn't play or sing." Too small to hold a guitar on her lap, she stood it upright like an acoustic bass. She began on WCUE in Akron, and this would have been in the late 1940s because the Martins returned to Virginia in 1948 or '49. By 1949, Janis was on WDVA in Danville with Glen Thompson and the Dixie Playboys. "I started out doin' the first shows just on an amateur basis when I was eight years old," she told Greg Milewski. "There was Eddy Arnold and Patti Page was doin' some things, but I liked Hank Williams' 'Lovesick Blues'. I always liked the up-tempo songs." 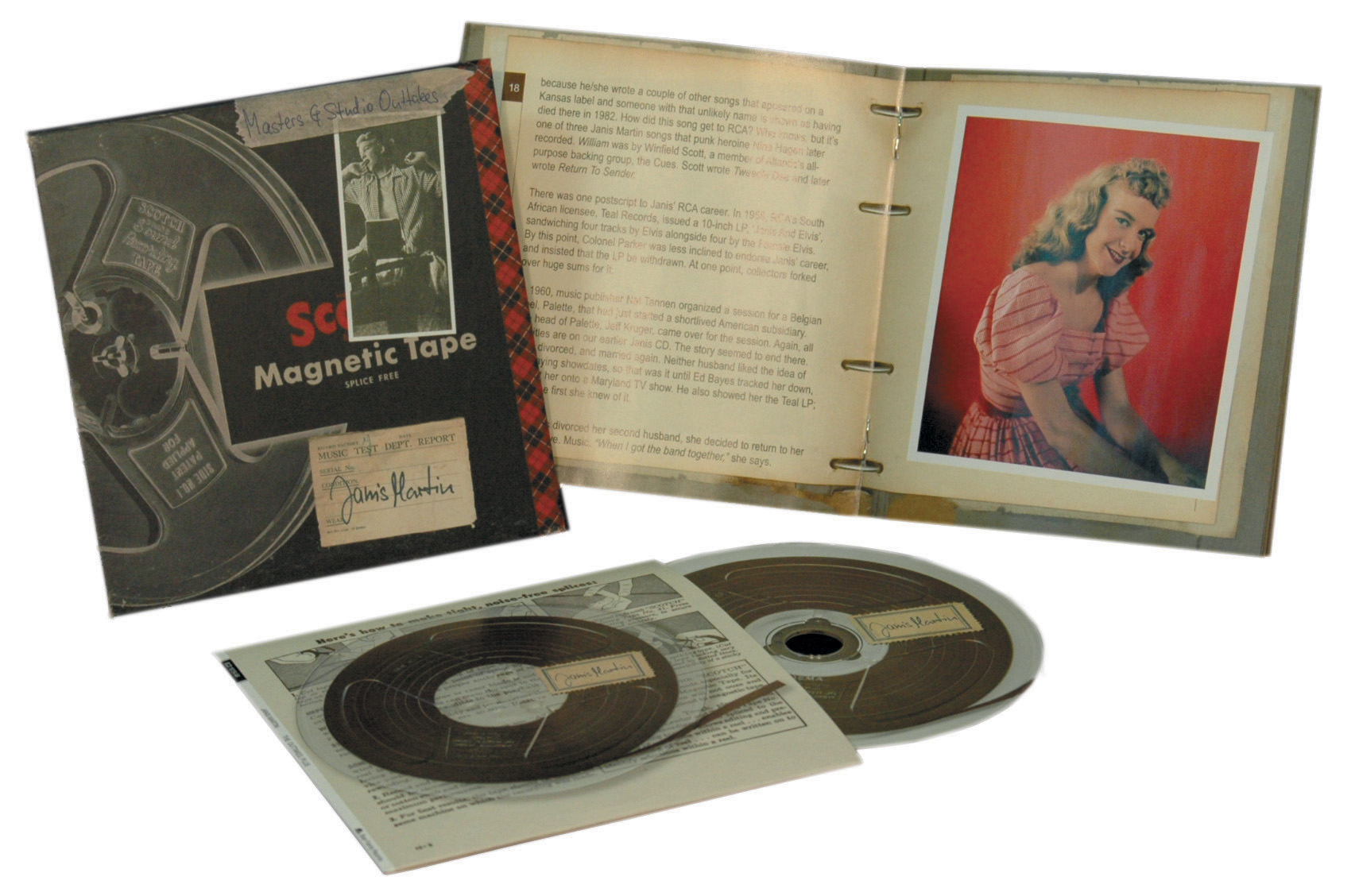 In February 1951, bluegrass star Jim Eanes settled in the Martins' new hometown, Martinsville, and Janis gigged around with him and joined him on WHEE. An aspiring country singer like Janis had several options open to her: she could enter talent contests and make the rounds of small radio jamborees, like the WDVA 'Barndance.' Too young to play bars, she could become a supporting act and local added attraction when the big names came to town. And so Janis entered talent contests, worked the bush league Opries, and opened for Ernest Tubb at a tobacco festival. Tubb told her to stick with it, but, gentleman that he was, he said the same thing to everybody.

By age fourteen, Janis had graduated to WRVA's 'Old Dominion Barndance' in Richmond. CBS radio carried the show on the network every fourth week, and itwas a big deal in its day. 'The Old Dominion' started in 1946 and, at one time or another, featured Grandpa Jones, Chet Atkins, Wilma Lee & Stoney Cooper, Joe Maphis, and a slew of bluegrass acts including the Stanley Brothers, Flatt & Scruggs, and Mac Wiseman. When Janis joined the show in 1953, she performed alongside Hawkshaw Hawkins, Jean Shepard, the Carter Sisters, Sonny James, and Martha Carson. "By the time I joined the 'Old Dominion Barndance' I was getting into my teens," she told Allen, "and it got to where I was bored with slow country songs, and I didn't particularly care for bluegrass either. It was the black R&B that I really started to get comfortable with. I started doing Ruth Brown and LaVern Baker songs. A few Dinah Washington songs too. I more or less ended up doing rock 'n' roll music on a country show."

One of the on-air personalities at WRVA, Carl Stutz, had written a #1 pop hit in 1954, Kitty Kallen's Little Things Mean A Lot. He'd also co-written Red Headed Stranger, which Willie Nelson would revive in 1974 as the title song of one of the best-selling country LPs of all time. Stutz began writing with another WRVA on-air personality, Carl Barefoot. In 1955, the pair wrote Danger! Heartbreak Ahead for Jaye P. Morgan, and later that year, they wrote a goofy pop song, Will You, Willyum. They asked Janis to try out the Willyum song on stage for them, and then demo it. The demo went to Tannen Music in New York, and Tannen sent it to Steve Sholes, head of country music A&R for RCA. Sholes had just signed Elvis away from Sun Records, and, as 'Country Song Roundup'reported, "Steve was supposed to be listening to the song rather than the artist, but Janis' unusual delivery stuck in his mind." Sholes asked Chet Atkins to find her, and Chet called WRVA, where someone gave him the number of a store down the road from the Martins' house. Mr. Owen at the local store, closed up, went looking for Janis, and told her Chet Atkins was looking for her. Just days later, she was in Nashville. 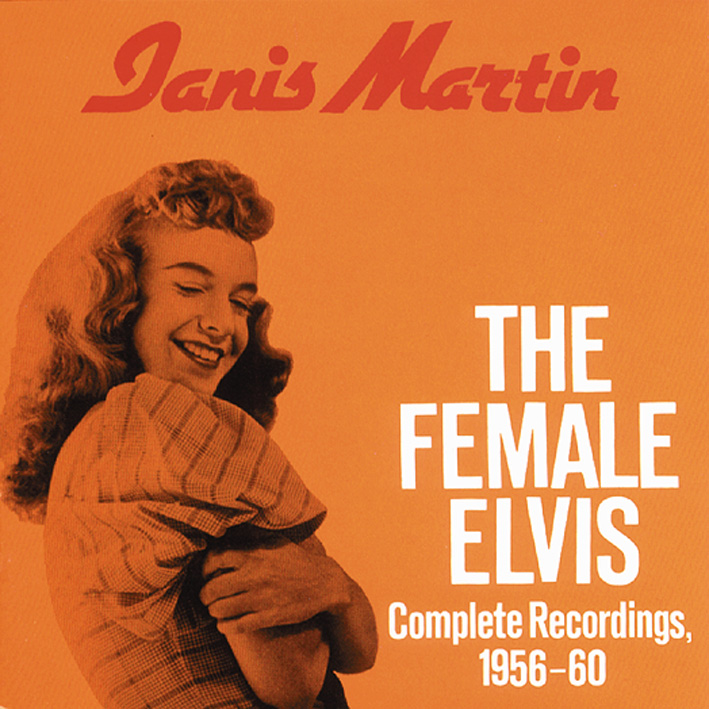 Chet Atkins and Steve Sholes brought Janis to Nashville on March 8, 1956. Sholes wanted to get the Stutz/Barefooot song recorded and he wanted a cover version of Buck Griffin's fast-breaking Lin record, Let's Elope Baby. "They made me feel right at home," she told Randy Fox. "I was nervous and all. I just went in, and they played the demo tape I'd sent down. They kicked it around and did their own arrangement. There was nothing written out. Floyd Cramer and all of them were just old country people like I was." Boudleaux Bryant was working for Nat Tannen's Tannen Music and got one of his songs, One More Year To Go, onto the session (see our 'The Female Elvis' CD for that one). The fourth song was Janis' own Drugstore Rock 'n' Roll. "It's real surprising," Janis said later, "because on my shows that I do in Europe, I always open with 'Drugstore

Rock 'n' Roll.' Even though it was a B-side, that's the side that took off as far as the kids in Europe are concerned. The only reason I wrote [it] is because they were just beginning to realize that artists would have more success if they could write their own songs. I wrote 'Drugstore Rock 'n' Roll' in about ten minutes. Everything in that song was actually the scene that was happening for us as teenagers [it was recorded three weeks short of Janis's sixteenth birthday]. The drugstore was the only place we had to go and hang out after school. They had the jukebox and soda fountain and we'd just go and dance and have a soda, maybe order a hamburger and that was our social life."

Janis hit the road in a big way. She acquired a manager, Burt Repine, who organized the Old Dominion road shows. Mrs. Martin chaperoned her. Pee Wee King brought Janis onto his television show in Louisville, and there were appearances with Carl Perkins, Pat Boone, Homer & Jethro, Porter Wagoner, and many others. 'C&W Jamboree'stated that Will You, Willyum reached #1 in Canada, and all indications are that it sold well (she quotes the figure of 750,000 copies), even if it didn't chart. It certainly sold well enough for Janis to buy a Cadillac with the first royalty check and for RCA Victor to keep the faith.

The second session was held in New York on May 11, 1956. "All those musicians up there had to have sheet music; they seemed to act like it was just a job," she told Randy Fox. "[Guitarist] George Barnes liked the music, and it showed. He really cooked. The break he did on 'Ooby Dooby' knocks me out, but otherwise, it was kind of a cold atmosphere in New York." Barnes, who would have been playing jazz if he could have made a living at it, also smoked cigars in the studio, making it very difficult for Janis to breathe easily. Steve Sholes found what was probably the first song about Elvis, My Boy Elvis, written by two New York songwriters, Aaron Schroeder and Claude Demetrius, who would later write for the man himself. The reason for holding the second session so quickly on the heels of the first was to get a cover version of Roy Orbison's Sun hit, Ooby Dooby. Nat Tannen got another two Stutz/Barefoot songs on the second session, Little Bit and Barefoot Baby. Sholes had already come up with the 'Female Elvis' sobriquet, apparently with the tacit approval of the Male Elvis. When Janis was showcased at RCA Victor's sales conference in Miami, Elvis sent a dozen red roses. The Female Elvis had just two brief encounters with the Male Elvis. "I said hello to him backstage at a show in Danville, Virginia," she remembered later (and the dogged research of Ernst Jorgensen enables us to place that meeting on September 20, 1955). "Later, I ran into him in New York at RCA's studio. He said, 'How's it goin'?' I said, 'Fine, how about you?' He said, 'It's rough!'" Rougher than she ever knew.