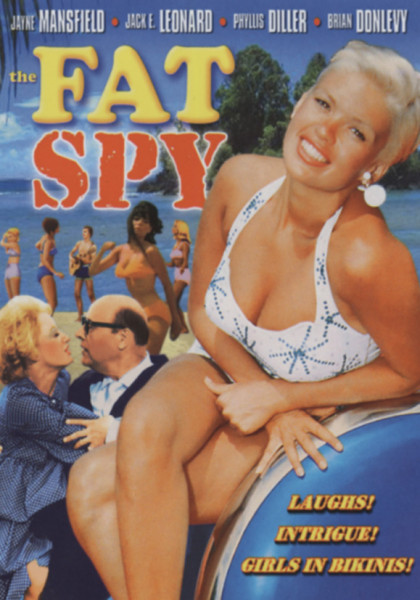 Learn more about Jayne Mansfield
Jane Mansfield It was the mid-I950's, Marilyn Monroe was all the rage, and every studio was... more
Close menu
"Jayne Mansfield"

It was the mid-I950's, Marilyn Monroe was all the rage, and every studio was rushing to discover its own blonde bombshell who could be the new answer to her. Marilyn herself, however, was desperately try-ing to drop that image and be taken as a serious actress, so her own studio, 20th Century-Fox, came up with an answer of its own --Jayne Mansfield. Ironically, despite all the publicity that she generated, Jayne's Hollywood career never took off the way she had hoped, and after a few "A" films that flopped, she was reduced to taking anything she could get,including, several European pictures that weren't even released. She did manage, however, to do the one thing that Marilyn herself craved for but was never able to accomplish -- a smash hit on Broadway, "Will Success Spoil Rock Hunter 7", which ironically had been turned down previously by Mamie Van Doren.

Van Doren, who was Universal's answer to Monroe, was to figure in Jayne's life more tragically several years later, when she was held-over in a stage production of "Gentlemen Prefer Blondes" and had to cancel a club date in Biloxi, Miss. Jayne filled in for her and had her fatal car accident on the way. It's interesting to note in retrospect that even though all the 50's blondes were lumped together at the time as copies of Monroe, many of them actually had some unique qualities of their own. While Marilyn combined her sexuality with an innocence and vulnerability, Mamie was tough and in full control, and was to come into her own a few years later with a series of rock and roll movies that established her true cult status. Jayne, however who was credited even then with an extremely high I.Q., exag-gerated the role of the dumb blonde beyond reality, with an over-stated figure to match. She created the perfect parody of the sexy dumb blonde and had enough innate intelligence to make it work.

Whatever her career lacked in solid accomp-lishments, she more than made up for with a steady flow of publicity that continually kept her image before the public. She was a popular TV guest, she had sufficient wit to feed clever lines to the nation's newspaper columnists, and enough cleavage to make the covers of all the popular men's magazines -- several of which would have been considered to be beneath the dignity of a bonafide movie star. She couldn't really sing, but posed for the covers of several LP albums on which her voice is never heard 1 She also made an attempt at pop singles, which were scarcely released at all and are heard possibly for the first time on this CD. She also created a nightclub act, which because of her notoriety, was able to get her booked in Las Vegas . Jayne Mansfield was a true icon of her time and she was too unique to be dismissed as just another copy of Monroe This album captures some of that special quality and proves the ultimate test of a good performer -- that you don't have to see her to enjoy her  -- Alan Eichler