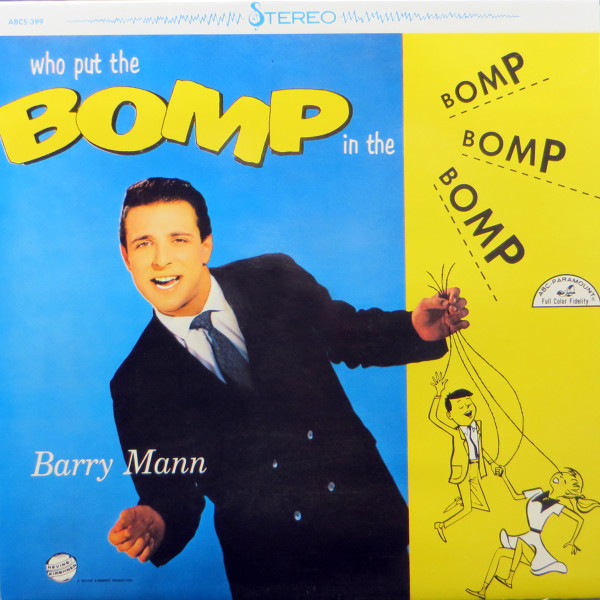 This article is deleted and can no longer be ordered!
Please inform me as soon as the product is available again.
P Secure bonuspoints now
Description
Learn more about Barry Mann
Review 0
Description
Considered to be among the fastest-rising young performers in show business today is Barry... more
Close menu

Considered to be among the fastest-rising young performers in show business today is Barry Mann, heralded as a true triple-threat talent in the fields of songwriting, composing and singing. just having turned 19, Mann can already look back on an enviable record of hit compositions written for a great many of his contemporary singing stars on record, plus his own full-fledged smash, Who Put the Bomp (in the Bomp-Bomp-Bomb)?

Barry Mann's inclination for music began during his early years in high school, when he started his songwriting and composing. He had taught himself to play the piano well enough to accompany himself in his singing efforts, besides helping him to develop his melodies. During his summer vacations from high school, he worked as a waiter in various hotels in New Y0rk’s famed "Borscht circuit," and got his "kicks" by participating in the local talent shows, both as :1 singer and as a pianist. For many of the shows, Barry Mann also was called upon to submit much of his original material, and he decided to make the all-out try to become a true professional in the entertainment ranks.

This had not been the original intention. With his wonderful gift for creativity, Barry Mann had initially laid plans to study architecture. Graduating from the James Madison High School in Brooklyn, N. Y, as President of his class, Barry Mann enrolled at Pratt Institute to pursue an architectural career, but soon found that his thoughts kept constantly drifting back to music. Accordingly, he then studied classical music for the next two years, then concentrated a year on pop styles. Having composed a tremendous amount of pop songs, the youngster made a number of demonstration records, arranging and performing his works himself. Then came the endless treks to publishing offices, agents, recording artists and record companies. It was while he was thus engaged that his demo discs were played for Al Nevins and Don Kirshner, free-lance record producers and managers. Nevins and Kirshner immediately recognized Barry's fabulous potentialities, and signed him to a contract.

After but a short period of grooming by his two mentors, Barry Mann was ready for his assault upon show business. Nevins and Kirshner found little di?ficulty in placing his compositions, gaining delight in seeing Barry’s songs hit the top of the best-seller lists, with such compositions as She Say (recorded by The Diamonds), Footsteps and Girls, Girls, Girls (recorded by Steve Lawrence), Time Machine (recorded by Dante and The Evergreens) and The Way of a Clown (recorded by Teddy Randazzo) all accounting for hit recognition in record time.

It was but a simple matter, then, for his managers to concentrate on Barry's ability as a vocalist for recording. After but one audition, Mann was signed to a long-term contract by ABC-Paramount. His second release on the label was the title song of this album: ll’/ho Put the Bump (in the Bomp-Bomp-Bump)? Anyone who has followed the course of pop records during the past few years can certainly attest to the success of this Barry Mann creation. Within three weeks after its release, the record had accounted for almost 250.000 in sales! Some five weeks later, the platter had gone well over the half-million mark and, at this writing, is still selling at a pace which seems certain to earn the erstwhile singing waiter the coveted gold record, emblematic of a "million- seller!"

It was to be expected that the growing mass of Barry Mann fans would begin the demand for a complete album of his smash hits, performed by the composer. This package is the answer to this demand, and there is every reason to believe it will receive the same acceptance as if it were a new single release. For Barry Mann is here to stay, both from the standpoint of his great writing ability and for the unusual flavor he can impart in his singing. As for the answer to the question, “Who Put the Bomp?" Make no mistake about it—Barry Mann put it there. Listen for yourself. . . .

Article properties: Barry Mann: Who Put The Bomp In The Bomp Bomp Bomp - Vinyl LP re

was born on Feb. 9, 1939 in Brooklyn, New York. A would-be architect, he became a songwriter when Paul Case, the general manager of the Aberbach family-owned Hill and Range Music, put one of Mann's first songs on the flip of Bobby Pedrick's 'White Bucks and Saddle Shoes' on Big Top - which was affiliated to Hill and Range -in 1958. In 1961, Mann married Cynthia Weil, with whom he was to write most of his hits, and turned briefly to recording when his own 'Who Put The Bomp' - with the bomp sup-plied by New York session singer, Ronald Bright - became a Top Ten hit on ABC in the summer of that year. Further records failed, as did his return to recording when, in the wake of the success of his fellow Brill Building songwriter, Carole King, he attempted a comeback as a singer/song-writer with solo albums in 1971 and 1975. However, if Mann's recording career was unspectacular, he and Cynthia Weil were one of the most successful non-performing American songwriting teams of the Sixties. In the years 1959-70 - on his own, with Cynthia Weil and with others - Mann wrote nearly 50 Hot Hundred records - only failing to score in 1967.

Moreover, as a list of these songs makes clear, Mann and Weil wrote in a variety of styles, though they were most successful with their urban protest songs. 1959: Mann's first hit, 'She Say (Oom Dooby Doom)' (the Diamonds, No. 18). 1960: 'Footsteps' (Steve Lawrence, No. 7) and 'The Way Of A Clown' (Teddy Randazzo, No. 44). 1961: among others two Top Twenty records, 'Bless You' (Tony Orlando) and (with Larry Kobler) 'I Love How You Love Me' (the Paris Sisters). 1962: six Top Twenty records, including 'Come Back Silly Girl' (the Lettermen), `He's Sure The Boy I Love' and 'Uptown' (the Crystals), `I'll Never Dance Again' (Bobby Rydell), 'My Dad' (Ray Peterson) and 'Patches' (Dicky Lee). 1963: ten Hot Hun-dred entries, including four Top Twenty records, 'Blame It On The Bossa Nova' (Eydie Gorme), 'I'll Take You Home' and 'On Broadway' (the Drifters) and 'The Grass Is Greener' (Brenda Lee). 1964: three Top Ten records, 'I'm Gonna Be Strong' (Gene Pitney), 'Saturday Night At The Movies' (the Drifters) and (with Phil Spector) the chart-topping 'You've Lost That Lovin' Feeling' (the Righteous Brothers). 1965: seven Hot Hundred entries, including 'We Gotta Get Out Of This Place' (the Animals) and 'Home Of The Brave' (Bon-nie and the Treasures and Jody Miller).