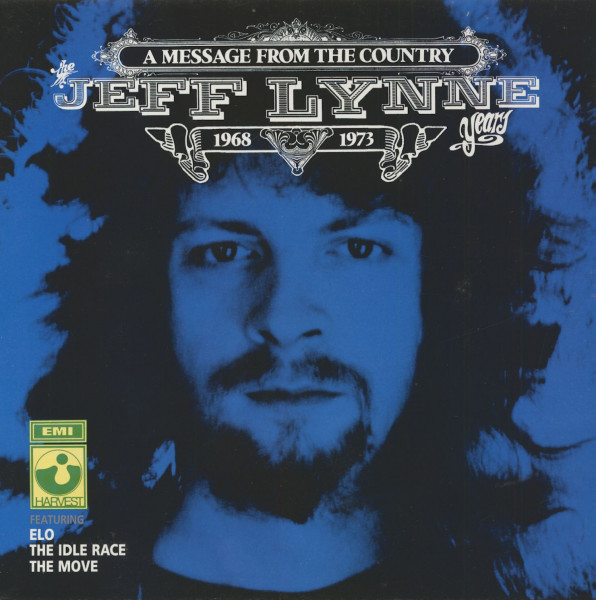 Jeff Lynne: A Message From The Country - The Jeff Lynne Years (LP)

(EMI Harvest) 14 tracks - Jeff Lynne in different groups like 'The Idle Race', 'The Move' and 'The Electric Light Orchestra' - Recorded between 1968 and 1972

Learn more about Jeff Lynne
By 1966, what had once been termed 'beat groups' were changing, and with the first flush of... more
Close menu
"Jeff Lynne"

By 1966, what had once been termed 'beat groups' were changing, and with the first flush of presence now fading, several were looking for new challenges. One such aggregation was Mike Sheridan and the Nightriders, aka Mike Sheridan's Lot, whose six singles had been musically strong but commercially unsuccessful. In January that year they split into several directions; their frontman formed Mike Sheridan's New Lot, while their guitarist, Roy Wood, helped form a new group from pieces of several • Birmingham 'rivals' who'd reached a similar crossroads - the Move. This left G, Masters (bass), Dave Pritchard (rhythm) and Roger Spencer (drums), whose first decision was to abandon any new name and instead revert to their previous appellation, the Nightriders. Equally pressing was a new member. At first they tried one Johnny Mann from the now-defunct Vikings, but he in turn was replaced by Jeff Lynne, who seems to have been relatively inexperienced prior to joining. Indeed he had little input on the Nightriders first 'solo' offering, 'It's Only The Dog', issued on Polydor in November that year. Within twelve months, however, he'd emerge as the group's guiding influence. Having ditched the anachronistic 'Nightriders' tag in favour of the Idyll, then Idle Race, the quartet signed with Liberty. Between 1967 and 1969 they'd issue two albums and six singles, all of which were criminally underrated.

A prevailing knack for melody was the main consistent factor, Lynne was adept at finding new twists to Paul McCartney-esque structures and almost everything from this period is a gem. If the first album, The Birthday Party' (October 1968) suffered slightly from a music-hall frivolousness, its follow-up. 'Idle Race' (November 19691 was a mature, crafted work. lncluded here from the former are 'The Skeleton and the Roundabout', which brims with fairground imagery, 'Morning Sunshine' and the, poignant 'The Birthday', while the sublime 'GM At The Window' and 'Come With Me', represent 'Idle Race', whose cumulative atmosphere is more difficult to break up. What was, by then, increasingly clear, was Lynne's ever increasing ideas and his frustration at the Idle Race's lack of recognition. This was one of the main reasons Jeff opted to join the Move in January 1970. He'd already turned down an offer in February 1969 when Trevor Burton left, preferring to stay with his own group. However, this now seemed a better time, and Lynne was able to persuade Roy Wood, by then the undisputed Move leader, that the two could embark on a new, challenging project, the Electric Light Orchestra. In the meantime, his erstwhile colleagues brought in two new members and carried on until 1972, ploughing an altogether different, more progressive furrow. Although the idea for the Electric Light Orchestra was announced soon after Lynne's arrival, there was no concrete evidence of the project for well over a year. In the meantime the Move; Wood, Lynne, Bev Bevan and Rick Price (who would subsequently leave) continued to enjoy a chart success with singles such as 'Brontosaurus, 'Tonight' and 'Chinatown, all of which were written by Roy.

Jeff's contributions first appeared on the group's third album 'Looking On', a somewhat heavy album but one which nonetheless began several facets of the ELO sound. However, it was on 'Message From The Country', the Move's last album, released in July 1971, that Lynne's contribution was most clearly defined. His four tracks there are each wonderful; from the evocative title track to the 'Paperback Writer'-ish 'The Minister, from the rhythmic 'Words Of Aaron' to the haunting 'No Time'. Memorable and imaginative, it was clear how each Lynne had blossomed since joining his new group. The Move's alter-ego was unleashed some five months later. 'The Electric Light Orchestra', designed to "take up from where the Beatles 'I Am The Walrus' left off', in fact took excellent Wood and Lynne originals and swamped them in a cross-section of woodwind and string sections, arranged to sound both medieval and mysterious. The basic Move trio was augmented by Bill Hunt and Steve Woolam and the result was another strong collection. The highlight was undoubtedly '10538 Overture', an irresistible mixture of tune and mayhem, but Jeff's 'Mr. Radio', which recalled the nostalgia of the early Idle Race, was another gem. It seemed to be a perfect mix. In the meantime the parent group continued into 1972 with 'California Man, which, as good as it was, was outshone by its coupling, the dramatic 'Do Ya, the toughest cut Jeff wrote for the Move. However, any balance was redressed when an edited '10538 Overture' followed it into the charts in June, and despite a disasterous in-concert debut at the Greyhound in Croydon the previous April, the ELO's future was now assured. Although Woolam had dropped out, the four remaining from the album's sessions were joined by Hugh McDowell (cello), Richard Tandy (bass/ key), Wilt Gibson (violin) and Andy Craig (cello), but the brief honeymoon was dashed when Wood, Hunt and McDowell quit the camp in July to form Wizzard. Problems - musical, personal and creative, have been blamed, but there were probably too many contrasting ideas being squeezed into one group. Certainly Roy Wood's later direction, (see 'You Can Dance The Rock 'N' Roll' - The Roy Wood Years 1971-73) was quite different to that of Lynne.

Jeff, Bevan and Tandy then put a reconstituted ELO together, the second of many subsequent changes, and began work on a follow-up album. It was January 1973 before they released a new record, and when it came it surprised those expecting seriousness from the Lynne-led version. 'Roll Over Beethoven' merged the Chuck Berry rocker with the deaf one's 5th Symphony and soared to a heady No. 6. The irony wasn't lost on Jeff's erstwhile colleague; Wizzard's next 45, 'See My Baby Jive', boasted a flip entitled 'Bend Over Beethoven' - the 'real follow-up to 'California Mar, That said, there was talk of a tentative Move reunion for studio work only, but this, unsurprisingly, didn't materialise. What did appear was 'ELO 2', a somewhat transitional collection. 'ELO 2' however, marked the end of the group's original, neo-experimental concept, as their third single, 'Showdown', proved. This owed more to Motown than 'Magical Mystery Tour' and brought the group a wider, more mainstream audience. It was also the final ELO release on EMI. From here the group moved to Warner Brothers and then let, and in the process became one of '709 most popular groups

Review 1
Read, write and discuss reviews... more
Close menu
Customer evaluation for "A Message From The Country - The Jeff Lynne Years (LP)"
From: Holger On: 26 Jul 2018