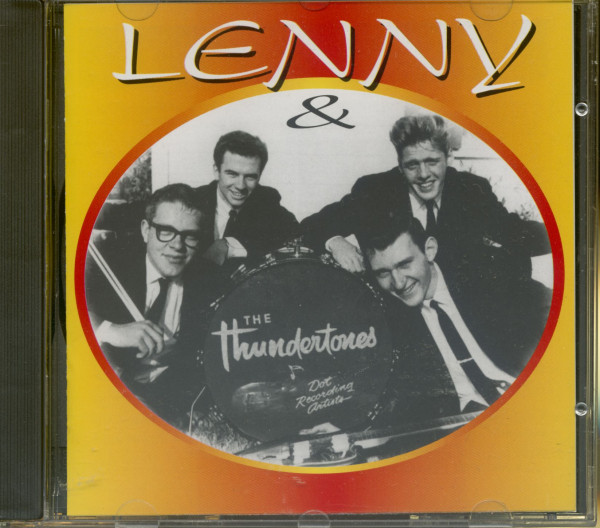 The History of LENNY and THE THUNDERTONES

The History of Lenny and The Thundertones started in 1959 at Redford High School in Detroit, Michigan, wher Lenny Drake (lead guitar), Pete Weiss (rhythm guitar), Al Johnson (bass) and Dave Ashbolt (drums) started the band named The Thundertones". Just across from Redford High was a record shop called Bell Records, Bud Jandrino was the owner and he became our manager. It turned out Bud was a good friend of Randy Wood who owned Dot Records. Bud set up a recording session in the spring of 1960, which turned out of be a "Webcor" reel to reel and a couple of mikes in some guys basement. I was very unhappy about it, but we recorded "Hot Ice" and "Jungle Fever". I told Bud how upset the band was about the session, but he said it was just a demo, and if Randy Wood liked it , we would re-record it. Well, he liked it, just the way it was. The Thundertones first Dot record released Sept. 1960 was a "Webcor" special.
When it came time to do our second "45 ", the band said "only in a pro studio", so we went to "Special Recording" where we would meet the man who would give us the true "Lenny and The Thundertones" sound, Danny Dallas, Nov. 1960. Dany was just as much a part of the band, as the rest of us, with his recording genius and arranging ability; "Happy Little Jug" and "Street Beat" was released on Dot in Jan. 1961.

Bud, now formed a partnership with Mr. Wood to start "Comma Records" and our third record "Thunder Express" and "Alabamy Bound", recorded at Special Reocrding with Danny engineering, exploded on the scene March 1961. We were on our way doing stage shows with Ruth Brown, Dave "Baby" Cortez, Dion and The Belmonts, and Smokey Robinson and The Miracles, who wehre presented with a Gold Record for " Shop Around". At one of the sohws, our forethe "45 ", The Social" (a tribute to the dance) and "On The Loose" (a driving R and B shuffle), recorded at Special Recording with Dany was released July 1961.

Soap Opera time - in Dec. 1961, Al Johnson leaves for California, for personal reasons and never returns, Bud and Randy have a parting of the ways and Comma Records is his-tory.
Things started looking up in the spring of 1962, when I got a call from Bill Carnes and Duane Hunter who owned Astra Reocrds and wanted the band to record on their lebel. I told them about Al leaving, but they said "no problem", because Bill played bass and rhythm guitar, and Duane played piano. Now there were five Thundertones. They also had a great idea of putting a lot of " 45's " out at the same time with the same personnel with different artist's names.

Our first " 45 " for Astra was "Homicidal" and "The Moon of Manakoora", recorded at United Sound in Sept. 1962 under protest by me, I wanted Danny at Special Recording, but they were paying the bills.
I talked Bill and Duane into doing our second " 45 " for Astra at Special Recording and it became one of the best fun tunes we ever did, and Bill and Duane were sold on Danny's talent, form then on Danny was in the driver's seat.

"Easy Goin' Part One", "Aim High", after which a whole string of " 45's " followed using Lenny and The Thundertones as the ignition switch.
So now, yours truly, Lenny Drake, Danny Dallas , and Bill Carnes continued the Lenny and The Thundertones legacy with various musicians. All the songs on this CD were remaste-red using the best material available by Danny Dallas at Sound Patterns.