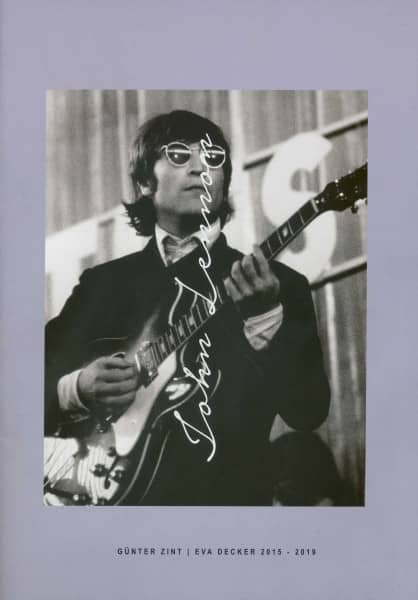 2015 was John Lennon's 75th birthday, the 35th anniversary of his death. Two exhibitions in the "Beat-City" Hamburg reminded of Lennon, who lived through hard years of apprenticeship with the Beatles in St. Pauli. This brochure was created on the initiative of Günter Zint. As a photographer, Zint got to know the Beatles during their legendary guest appearances in the Star Club - and he particularly appreciated John: "He was my favourite of the Beatles and the closest to me in terms of his political views".

This brochure focuses on Lennon's time in Germany as a short but formative stage in his life. In order to get closer to John Lennon, his music offered a good access besides the literature research. Conversations with people like Günter Zint and Hans-Walther "Icke" Braun, who met the young Lennon and could tell about him, completed the picture. Through their stories "at first hand" the nights in the Star-Club came to life and the St. Paulis of the 1960s, heart of the "Beat-City" - Hamburg, took shape in their own imagination. Many of the places that formed the cornerstones of Lennon's world at that time still exist, of some, such as the Star-Club, only a commemorative plaque remains.

"All these places had their moments", it says in the Lennon song In My Life and some of these moments in Hamburg are reproduced in this brochure - by no means with the claim to create a polished profile of John Lennon, that cannot be achieved here. It shows excerpts from an early phase in Lennon's life, which in retrospect proved to be the starting signal and "motor" for his further path. If it is possible to get the feeling that one has approached John Lennon as a human being through the insights into the "cosmos" and the way Lennon moved in it, a lot has been gained.

The later symbolic figure of the peace movement was born in the years
of the Second World War, October 9, 1940, in Liverpool.