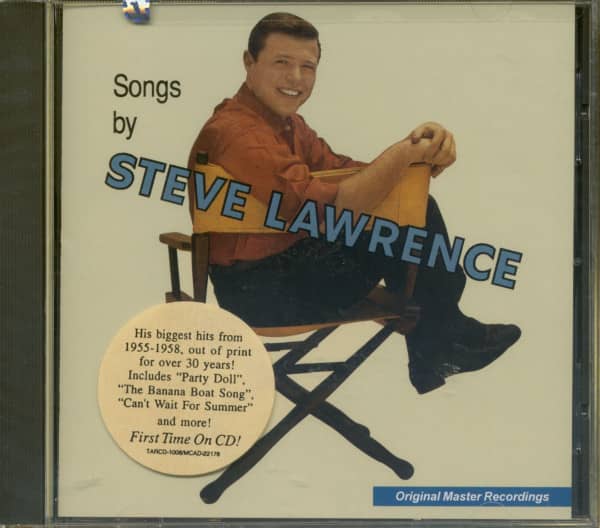 This article is deleted and can no longer be ordered!
Please inform me as soon as the product is available again.
P Secure bonuspoints now
Description
Learn more about Steve Lawrence
Review 0
Description
​(1994/Taragon) 15 tracks In the popular music business the phrase "to make noise" means to... more
Close menu

In the popular music business the phrase "to make noise" means to attract considerable enthusiastic and favorable attention. And not too many years ago a truly virtuoso singing performance of the popular classic "Poinciana" by a young man made a lot of noise around Tin Pan Alley. The tune "Poinciana", is of course, one of the mom artistically intricate and difficult to execute i effectively in the popular field. And this young man showed such true pitch, such arresting tonal qualities, ! such authority in phrasing and delivery that his performance of the venerable song won him quick attention of the trade press, talent managers and buyers. His name is Steve Lawrence, and he has been making noise in the music business ever since. 1 He was sixteen when he startled the music industry with his vastly talented rendition of "Poinciana", ! and interested music business parties who looked him up and found that he had won an Arthur Godfrey Talent Scout show some time previous. They found that his dad was a Cantor in a Brooklyn synagogue, and that young Steve Lawrence's proficiency with a popular song was no accident. At eleven he and the Lawrence family decided that he would strive to be a popular singer. For three years previous, from the time he was eight, Steve, his older brother and Dad had sung together in the synagogue. But now that the decision was made for Steve to attempt a career in the music industry, his father wisely urged him to preserve his voice, and to concentrate on learning the basics of his trade. For three years, until he was fourteen, then, young Steve did almost no singing at all. But he studied piano, saxophone, arranging and compositions. Then in Thomas Jefferson High School in Brooklyn, in easy stages, he resumed his singing, working industriously with the school Glee Club. Shortly thereafter came the Godfrey victory and noise-making rendition of "Poinciana." It was this intense and careful basic popular musical training, which enabled young'; Steve to sing "Poinciana" with the impressiveness he displayed. And there is little doubt that it was this T" training, which enabled him to stand out, shortly thereafter, in a group of more than fifty young singers, who were auditioning for a new Steve Allen Show to be telecast via the NBC-TV New York outlet, WRCA-TV.1 Steve Lawrence was Steve Allen's choice hands down.

Via the Steve Allen show, which in September of 1954 became the NBC-TV network show "To-night", Steve Lawrence has since become the favorite male vocalist of literally millions of music lovers from Coast to Coast. In addition to his constantly developing talents as a singer, he has learned a good deal about acting and comedy through his television work, thanks to the always helpful Allen. But never before have his unparalleled vocal talents been so amply displayed as they are in this long playing collection. Here he does a group of the teen-ager hits which he has made peculiarly his own. Such songs as "Party Doll", "Can't Wait For Summer" and "Fabulous". Here, too, be sells with a devastating charm rarely heard in a pop collection the show and movie tunes "Ethel, Baby' (trom "Mr. Wonderful") and "Adelaide" (from "Guys and Dolls"). Here he runs the gamut from the folk-calypso styled "Banana Boat Song" to "Open the Gates of Mercy" with in-between stops at the romantic "Long Before I Knew You" and "Kiss Me Now". Here is a great, well trained talent, loaded with heart and charm, singing for you, at the halfway mark in a brilliant career. Young Steve has already come far, but you and I know he will come much. much farther as time goes on