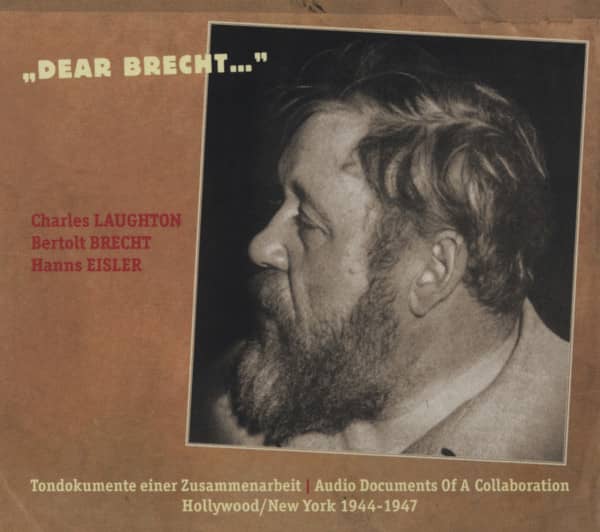 2-CD digipac with 116-page booklet, 31 tracks. Total playing time approx. 128 mns.
In March 1944, a chance meeting between three men in Santa Monica had far-reaching consequences. Playwright Bertolt Brecht and composer Hanns Eisler had worked together in Germany long before their period of exile in California. During an evening in the home of actress Salka Viertel, they found themselves in conversation with the famous British actor Charles Laughton. Brecht and Eisler had both seen Laughton in 'The Private Life Of Henry VIII'. When Brecht mentioned how much he liked the scene where Laughton played the English King devouring rather than eating a chicken, the actor was delighted. This broke the ice. Soon, the three would be working together.

Brecht appeared in Laughton's life at the right time. The latter had not trodden the boards for almost a decade, very much to his regret. Right from the beginning he showed an interest in Brecht's dramatic productions. In return, the German emigrant admired the great actor. At the time Laughton was preparing his first voice recording for the Decca record company: two Bible excerpts ('The Story Of The Three Wise Men' / 'The Oldest Christmas Story') along with the Christmas chapter from the Dickens novel 'The Pickwick Papers.' Eisler suggested he could write small pieces of accompanying music, and Laughton agreed. The composer opted for a quintet line-up and the gramophone records were recorded in September 1944 at Decca's Hollywood studios. Here they are re-issued on CD for the first time.

The Christmas recording sold very well, and soon the record company was considering another Biblical release as a follow-up: an excerpt from the Book of Genesis, 'In The Beginning.' When Laughton mentioned this, Brecht suggested that Laughton speak the text several times, in different versions, in a series of "exercises". In early May 1945, the two went into a recording studio in Santa Monica where Laughton, virtually under Brecht's supervision, narrated a total of eight different versions. These precious private recordings are released here for the first time.

In September 1944, Brecht spoke with Laughton about his 1938/39 play, 'Life Of Galileo'. "From the moment Laughton read it, he must have realized that this was his play". Brecht and Laughton initiated an intense collaboration over the revised English text, a project that would last for almost three years. The first completed version was presented in early September 1945. The Atomic Age had just begun in Hiroshima: Brecht now fundamentally revised his play, sharpening the contours and consistently branding Galileo as a betrayer.

Eisler composed the stage music for the American version of 'Galileo', with a total of 13 vocal scenes featuring boys' voices, flute, clarinet and harpsichord, and a street singer ballad. During a music rehearsal the composer requested that several pieces be recorded on gramophone records, which are here released for the first time.

Staged by Joseph Losey, the US version of 'Galileo' had its opening night at the Coronet Theatre on July 30, 1947. It was the season highlight: many Hollywood stars were in the audience, keen to see Laughton's first stage appearance in many years. All 17 shows were sold out; by the end of the run, some 4,500 visitors had watched the play.

When the play finally opened on Broadway, Brecht could no longer be present to see his most fervent dream come true. After having been interrogated by the House Committee on Un-American Activities in October 1947, he had left the US. The Broadway opening night of 'Galileo', much acclaimed, took place on December 7, 1947. Five further shows followed until December 18. In the middle of this series, Laughton sent a spoken 45 minute long report to Brecht, recorded on private aluminum foil. This rare document is released on this 2-CD set for the first time, and it offers the listener a vivid impression of the exceptionally close and respectful relationship between the Anglo-American world star and the German playwright. Apart from detailed messages, the report contains several scenes from 'Galileo' delivered by Laughton, demonstrating how the great actor performed the part.