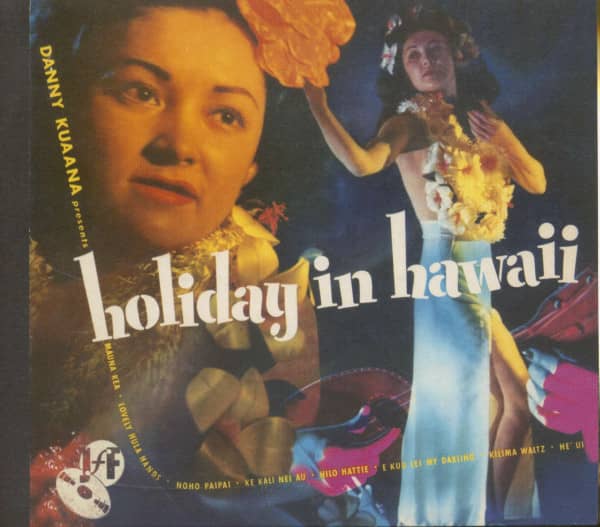 (and more bears) 8 Tracks - Digipack - Limited Edition: 300 copies
Danny Kuaana: Holiday In Hawaii
One of Hawaiian music’s great high falsetto stylists, Danny Kua’ana (1903-1970) spent most of his performing career on the American mainland. Born in the Honolulu suburb Kalihi-Uka, Kua’ana learned ukulele and guitar at an early age. After moving to Los Angeles, he joined Dick McIntire’s Harmony Hawaiians. By 1938 he was singing and playing ukulele with Lani McIntire’s Hawaiians, eventually relocating to New York for an extended engagement in the Lexington Hotel’s Hawaiian Room.

Returning to California, Kua’ana formed his own band and extensively toured the United States. In December 1945 he began recording material for his first album, Holiday in Hawaii. Released in June 1948, it featured Bernie Ka’ai on steel, Mel Peterson and Joe Kealoa on guitars and Al McIntire or Ernest Tavares on bass. Graced with a cover featuring dancer Leialoha, the album generated strong retail sales, many of its tracks later resurfacing on an LP that remained in print into the 1970s. If “Ke Kali Nei Au” (Waiting There for Thee) sounds familiar, songwriters Al Hoffman and Dick Manning used its melody for the beloved 'Hawaiian Wedding Song.'

In 1950 Kua’ana and his band toured the United States in skater Sonja Heine’s lavish Hollywood on Ice revue and recorded an album with steel guitarist Jerry Byrd. He continued touring and making occasional recordings into the sixties.